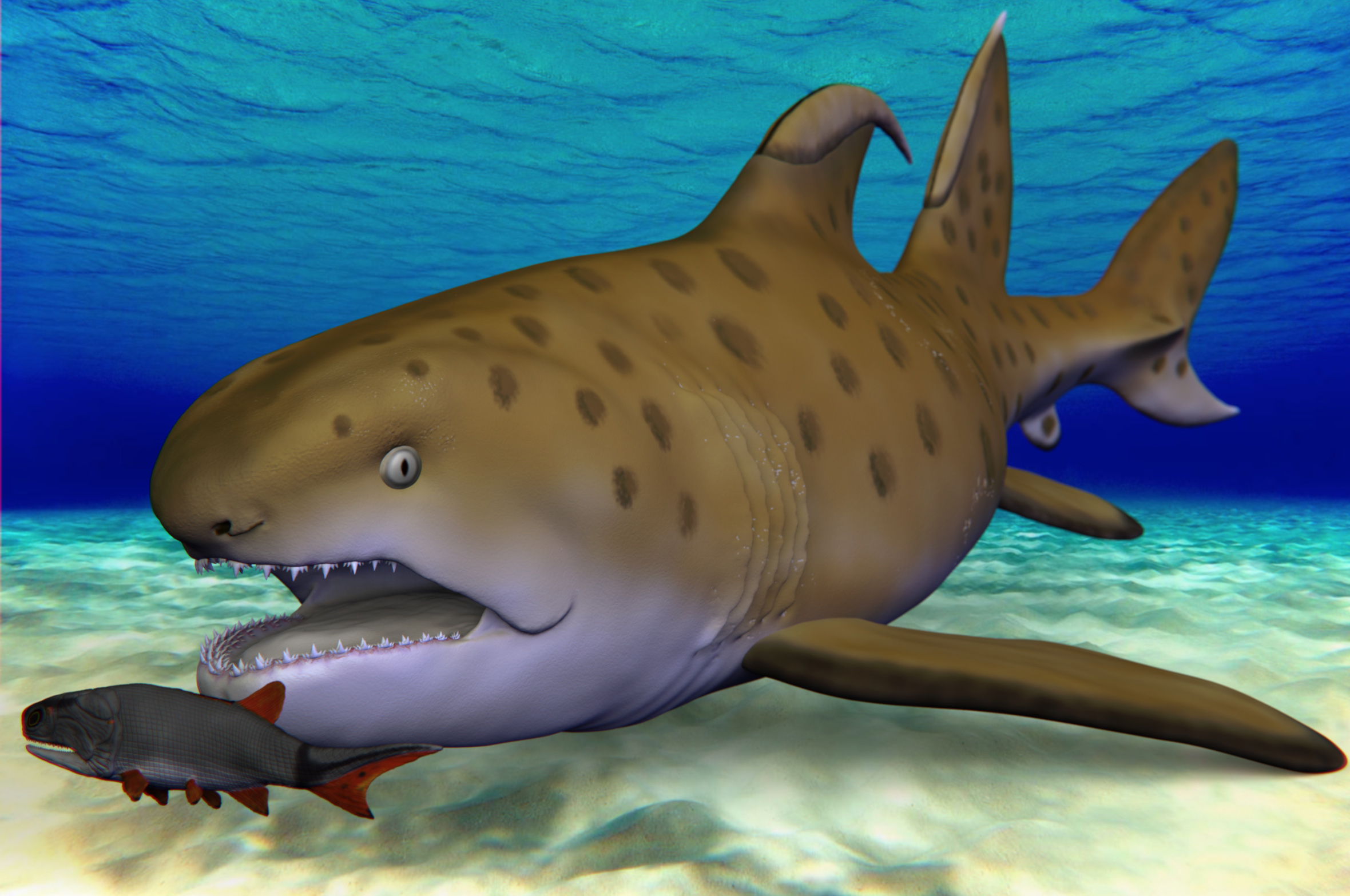 A 300 million-year-old shark relative, nicknamed the Godzilla shark after its discovery in 2013, has finally received a proper name after being classified as its own species.

Paleontologists found the unusually complete and well-preserved 6.7-foot-long (2 meters) fossilized skeleton of the ancient shark at a private site in the Manzano Mountains near Albuquerque, New Mexico. Standout features of the skeleton include 12 rows of piercing teeth set in robust, powerful jaws, and a pair of 2.5-foot-long (0.8 m) fin spines on its back.

It was nicknamed the Godzilla shark because of its size — the skeleton is the largest fossil of its kind ever discovered in the area — and the reptilian nature of the spines on its back, John-Paul Hodnett, who first unearthed the fossil and led the new research, told Live Science.

“I am also a big fan of the Godzilla film franchise,” Hodnett, a paleontologist at the Maryland-National Capital Parks and Planning Commission, said. “So when the features of this shark came to light, I thought it was the perfect nickname.”

The shark has now been officially named Hoffman’s dragon shark (Dracopristis hoffmanorum), after the family that owned the land where the skeleton was found, and as an homage to its monstrous, reptilian appearance.

“It is very rare to find skeletal material of ancient sharks, let alone a complete skeleton that also preserved the body outline and other soft tissue impressions,” Hodnett said. “That and it being a new species was also amazing and unique.” 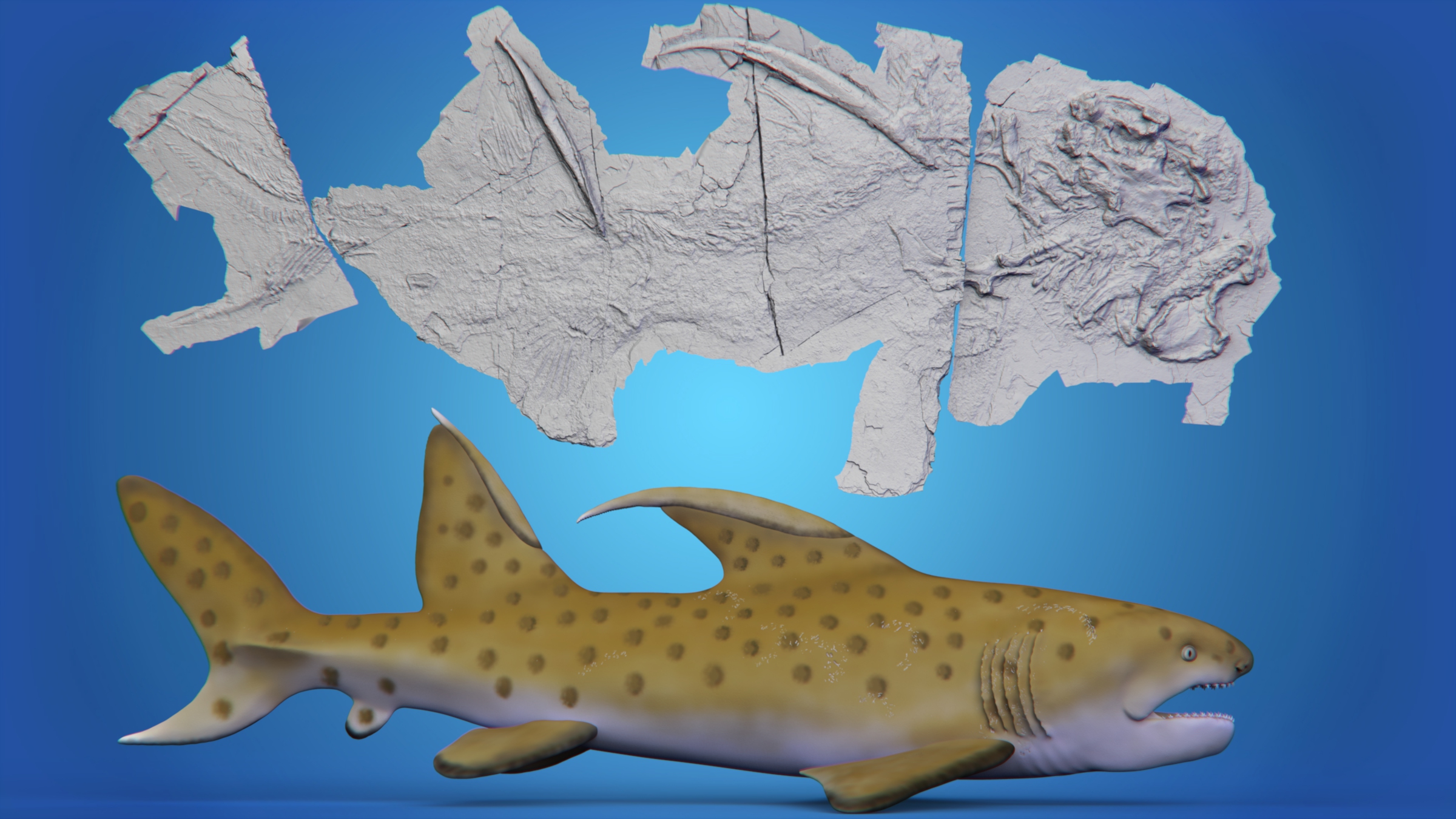 Hoffman’s dragon shark belonged to a group of mysterious ancient sharks known as the Ctenacanths which diverged from modern sharks and rays around 390 million years ago during the Devonian Period. The exquisitely preserved skeleton enabled the researchers to learn more about this poorly understood group.

One of the biggest differences between the Ctenacanths and modern sharks is their jaws. “Their [Ctenacanths] jaws are larger, more firmly attached to the cranium, making them less flexible,” Hodnett said.

These fixed jaws may mean Ctenacanths were not apex predators as modern sharks are. Instead, the new fossil suggests they may have occupied a different ecological niche.

“From the anatomy of the pectoral fins and tail we propose that Dracopristis was most likely a predator that kept close to the bottom of the ancient lagoon estuary it lived in,” Hodnett said. “The teeth are also more adapted for grasping and crushing prey like crustaceans and small vertebrates.”

The large spines on the back of Hoffman’s dragon sharks may have been used as defense against larger sharks, the researchers suggest. Large shark teeth found in the area provide evidence that this is the case, according to a press statement from the New Mexico Museum of Natural History & Science (NMMNHS).

The Ctenacanths went extinct during the mass extinction event at the end of the Permian Period 252 million years ago, which brought an end to the Paleozoic Era. However, the exact cause of the sharks’ demise is still unclear.

The researchers are now looking for more Ctenacanth fossils in the area to learn more about their life-history traits — evolutionary characteristics such as longevity, growth rate, age of reproductive maturity and reproductive output.

“We can’t reliably reconstruct the life-history traits of a species based on one specimen alone,” co-author Eileen Grogan, a biologist at Saint Joseph’s University in Philadelphia, told Live Science. “A more holistic understanding of life-history traits requires greater sampling across sizes, sexes, and the environments in which the organism existed.”

The study was published online April 15 in a NMMNHS Bulletin.

New research finds packs of T-rex roamed the Earth, 20,000 at a time

Results From The World’s Largest Wellbeing Study Are…