As many as 2.5 billion Tyrannosaurus rexes once stalked Earth 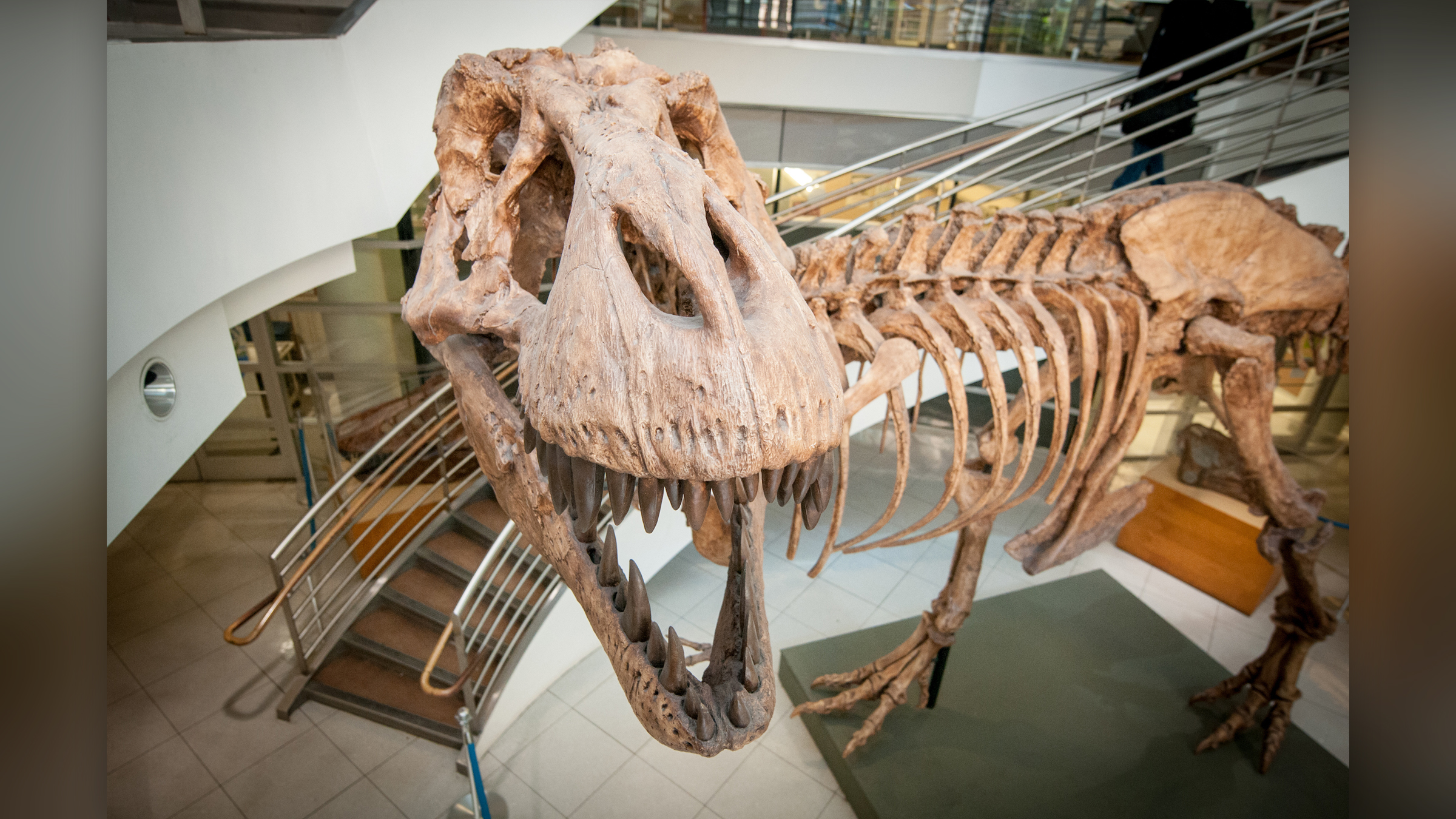 During the late Cretaceous period, Tyrannosaurus rex prowled Earth in great numbers — in fact, as many as 2.5 billion of these dinosaur kings lived over a period of about 2.5 million years, tramping through North America as they hunted prey and flashed their serrated, banana-size teeth, a new study finds.

Finding this number was no easy feat, according to the researchers. After considering many factors, including the apex predator’s population density and home range, they determined that about 20,000 adult T. rex individuals were alive at any one time between about 68 million and 65.5 million years ago, plus or minus a factor of 10, the researchers reported in a study published online Thursday (April 15) in the journal Science.

Of note, the finding includes only post-juvenile T. rex individuals. That’s because younger T. rex likely lived in different niches and ate different foods than older individuals did; moreover, they didn’t always survive to maturity, and so weren’t included in the final tally, the researchers said.

The finding, once thought impossible, is the first calculation for the population of any extinct beast that lived long ago and may open the door to similar calculations for other extinct creatures, the researchers said.

The late U.S. paleontologist George Gaylord Simpson said there were too many unknowns to figure out overall population numbers of extinct animals that existed long ago. But in the 77 years since the influential scientist published this idea, paleontology has moved forward in leaps and bounds, including in its ability to determine how long the average T. rex lived and at what age it reproduced, said Gregory Erickson, a professor of biological science who specializes in dinosaur paleobiology at Florida State University and wasn’t involved in the study.

That said, the study’s researchers are transparent about the new research making a few assumptions. For instance, the T. rex population was likely about 20,000 at any one time, but the 95% confidence range — the range of numbers in which there’s a 95% chance the true number falls — is 1,300 to 328,000. In other words, when the T. rex total is calculated (which includes population density, population size at any one time, generation time and total number of generations), the number of T. rex individuals that ever lived could be anywhere from 140 million to 42 billion, the researchers said.

“As Simpson observed, it is very hard to make quantitative estimates with the fossil record,” study lead researcher Charles Marshall, director of the University of California Museum of Paleontology, the Philip Sandford Boone chair in paleontology, said in a statement. “In our study, we focused [on] developing robust constraints on the variables we needed to make our calculations, rather than on focusing on making best estimates, per se,” added Marshall, who is also a professor of integrative biology and of Earth and planetary science at the University of California, Berkeley.

Marshall and his colleagues began the project by looking at the relationship between population density and body mass, which is crunched into a formula developed by John Damuth, a research biologist at the University of California, Santa Barbara, who wasn’t involved in the study. This formula, known as Damuth’s law, is rigorous, but researchers still need to account for ecological differences, including whether the animal has a low or high metabolism and whether it’s an herbivore, an omnivore or a carnivore. For instance, jaguars and hyenas are roughly the same size, but hyenas have a population density that’s 50 times greater than that of jaguars, the researchers said.

For the calculations, Marshall and his colleagues had to guess T. rex‘s metabolism. Based on research, they decided that T. rex was likely an energetic predator, that the paleo-carnivore likely had a metabolism between that of a Komodo dragon, the largest living lizard on Earth, and a mammalian carnivore, like a lion.

Then, after sifting through the scientific literature, the researchers determined that T. rex likely reached sexual maturity at about 15.5 years, probably lived into its late 20s and had an average body mass of 11,400 lbs. (5,200 kilograms). The team also analyzed how T. rex grew over its life span, and they noted that it had a growth spurt around sexual maturity and could weigh as much as 15,400 lbs. (7,000 kg).

These estimates allowed them to calculate that each T. rex generation lasted about 19 years and that these dinosaurs had an average population density of about 1 T. rex per 38 square miles (100 square km).

After that, they deemed that T. rex lived in a range spanning about 888,000 square miles (2.3 million square km) and that these beasts existed for about 2.5 million years. This led them to calculate the standing population of about 20,000 T. rex, which lived for about 127,000 generations until the species went extinct at the end of the Cretaceous period, about 65.5 million years ago.

(Not) a fossil bonanza

According to these calculations, billions of T. rexes existed, but relatively few T. rex fossils have been recovered. Current records show that fewer than 100 T. rex individuals have been unearthed, and many of those are each known from just one fossilized bone.

“There are about 32 relatively well-preserved, post-juvenile T. rexes in public museums today,” Marshall said. “Of all the post-juvenile adults that ever lived, this means we have about one in 80 million of them.”

However, this number is higher in T. rex hotspots, including at the famous Hell Creek Formation in Montana, where T. rex fossils are more likely to be found. In these hotspots, “we estimate we have recovered about one in 16,000 of the T. rexes that lived in that region over that time interval that the rocks were deposited,” Marshall said.

He acknowledged that other researchers may debate some of the assumptions his team made but that overall, the methods he used can provide a useful method for estimating extinct populations.

“I think it was thought-provoking,” Erickson told Live Science. Despite the number of assumptions the researchers made, “I think they got it as close as you can. …They really had to bridge so many different fields to put this together, and I think they should be commended for that.”

T-rex maybe not so mighty after all

‘Tree farts’ make up about a fifth of greenhouse gases from…