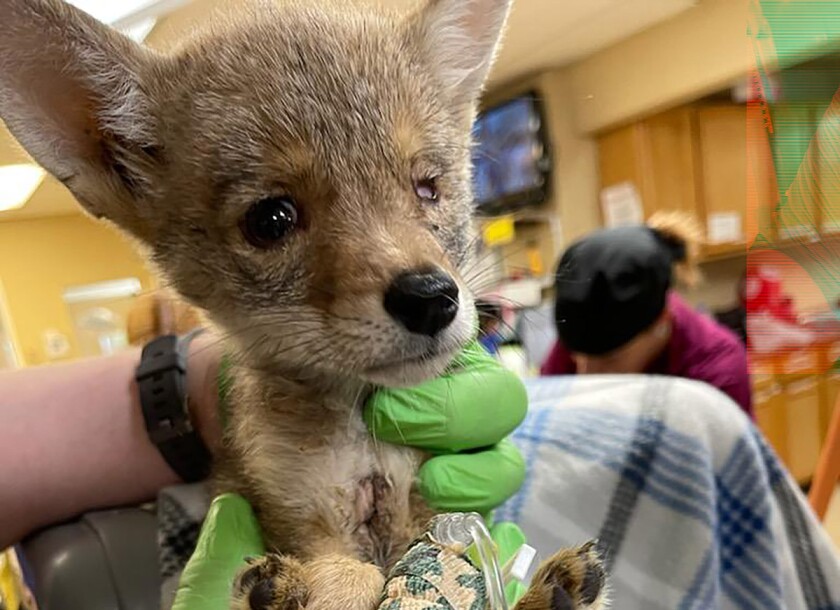 A badly injured coyote pup was found by hikers in Palm Springs and treated for serious injuries at an animal hospital over the last week. Twenty-Twenty, a nod to his damaged eye, is expected to live, though he is unlikely to be able to return to the wild.(Apple Valley Animal Hospital ) Share Close extra sharing options

At a Palm Springs wildlife preserve, a group of Arctic wolves began howling during Tuesday’s wee hours. A battered coyote pup who days ago could barely bark or lift his head began singing along.

Kele Younger, founder of the Magic Jungle Wildlife Preserve, said it was nothing short of a miracle — despite the cacophony intruding on her sleep.

“It really means he’s on the road to this extraordinary recovery,” Younger said of Twenty-Twenty, a name given to the pup as a nod to his injured eye in hopes it would heal.

Just over a week ago, hikers found the coyote pup in the foothills of the Indian Canyons area in Palm Springs. The pup appeared to be alone and badly injured, so one hiker took him home and tried to rehabilitate him, Younger said. Animal authorities said he may have been mauled by a mountain lion, bobcat or other animal much larger than his tiny self.

Then Younger got a call asking for help. Younger said several other facilities declined to lend a hand, and she ultimately took the pup back to her place. There she fed and watered him, and he fell asleep watching Netflix.

But the next morning, Twenty-Twenty was not in good shape. “He was just looking into my eyes and saying, ‘I’m really sick, I need a doctor,’ ” Younger said.

That day he was admitted to the Apple Valley Animal Hospital, where Younger often has her other exotic animals treated.

When Twenty-Twenty arrived, he was dehydrated and weak. Further examination revealed he was suffering from a fractured sternum, a puncture wound and severe trauma. He’s blind in his left eye, and it’s unclear if it’s due to a previous injury or if it’s a developmental defect, said Dr. Cliff Jessen, a veterinarian who treated the pup.

Staff treated him with IV fluids, antibiotics and “lots of TLC,” Jessen said. Younger is raising funds to cover the cost of his treatment.

The roughly 6-week-old coyote appears to be on the mend.

“He’s still in the process of recovery, so we don’t know how his body’s going to do as far as complete recovery, but he’s making perfect progress so far,” Jessen said.

The pup spent last weekend at the home of Jessen and his wife, Karen, manager of the animal hospital. The couple realized he was able to lap water from a small bowl, so they removed his IV. They took him for short walks a few times a day outside their desert property, where he mainly wanted to hide. Coyotes, and especially pups, are shy, Karen Jessen said.

By the time he went back to Younger’s house Monday night, Karen Jessen said, “really for hours, I could just hold him, like cuddling a little baby, and he’d put his head on my shoulder.”

In the short term, he’ll continue to recuperate at Younger’s preserve, where she’s feeding him with a syringe. It’s unlikely that he’ll be able to return to the wild, given his physical impediments and habituation to people. Younger may eventually transfer him to a facility where he can spend time with other nonaggressive coyotes.

Beautiful Bone Carving From 51,000 Years Ago Is Changing Our…

Over 200 Million Years Ago, Nature Called. It Was Full of…