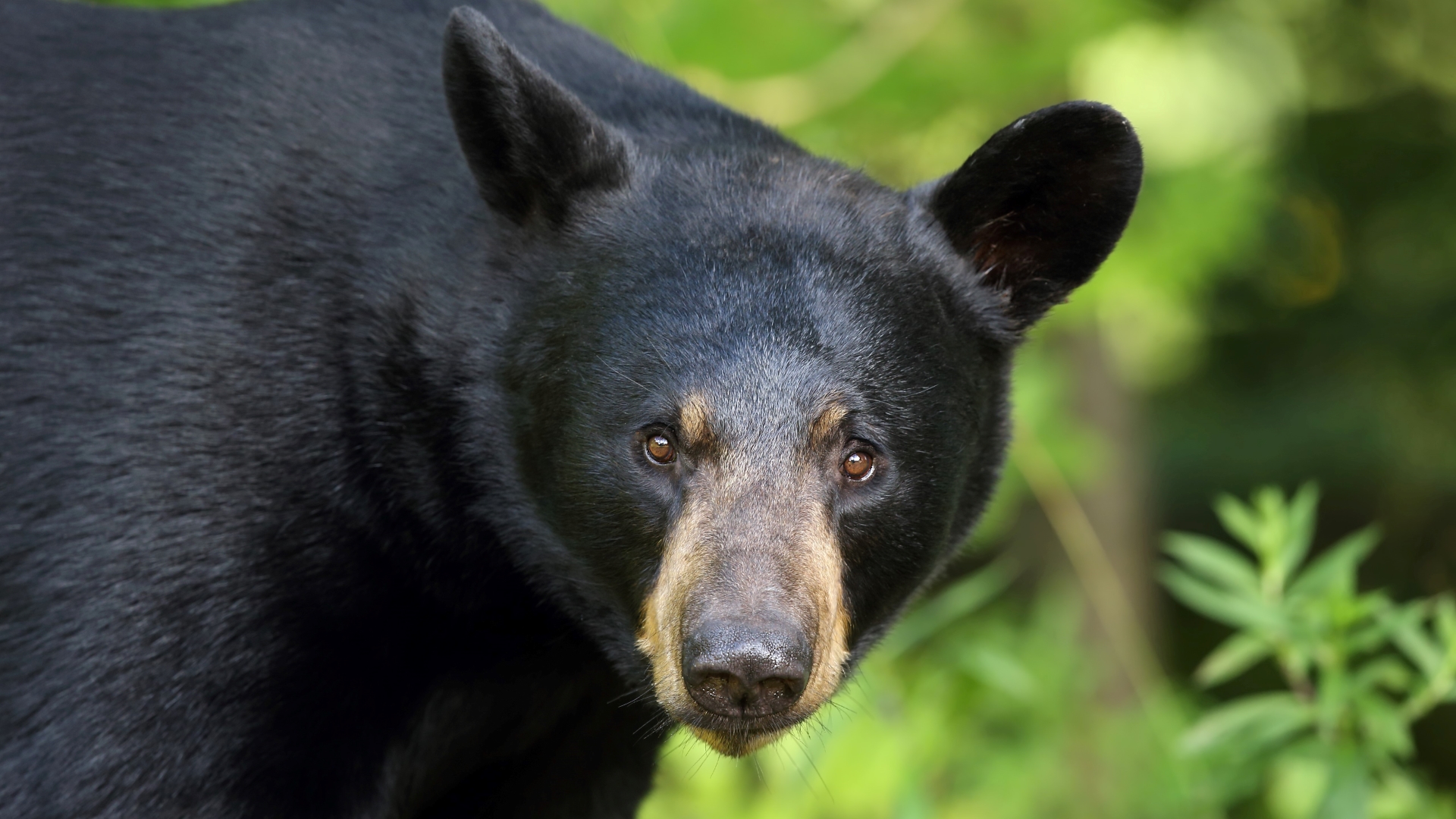 Black bears are excellent climbers and use their curved claws to scale trees and access food, such as nuts and honeycombs. On the ground, they are powerful runners and can reach speeds of up to 35 mph (56 km/h), according to the U.S National Park Service (NPS).

Black bears are usually black, as their name suggests, but their coats may also be brown, cinnamon-colored or even white, according to the International Association for Bear Research and Management (IBA). This coat variation means they’re occasionally mistaken for brown bears, especially where the ranges of the two species overlap in the northwest of the U.S. and Canada.

How to identify a black bear

Although brown bears are bigger than black bears and usually have lighter-colored coats, the NPS suggests that other characteristics, such as the shape of the bear’s body and their tracks, are a more reliable way to identify each species. Black bears do not have a pronounced shoulder hump, and their shoulders are lower than their rump when standing on all fours. Brown bears, on the other hand, have a clear shoulder hump that is higher than their rump.

Where do black bears live?

Black bears range from northern Mexico, through the U.S., to northern Canada. They are found in 32 U.S. states and every province in Canada except Prince Edward Island, according to the IBA. Black bears are usually found in coniferous and deciduous forests, but their broad diet enables them to also use other types of habitat, including open alpine areas, according to The National Wildlife Federation.

Brown bears live in the western region of the black bears’ range, including western Canada and U.S. states such as Alaska, Washington and Idaho. Black bears also live so far north that their range overlaps with polar bears along the northern coastlines of Canada, such as in Ontario and Québec, according to the International Union for Conservation of Nature (IUCN). 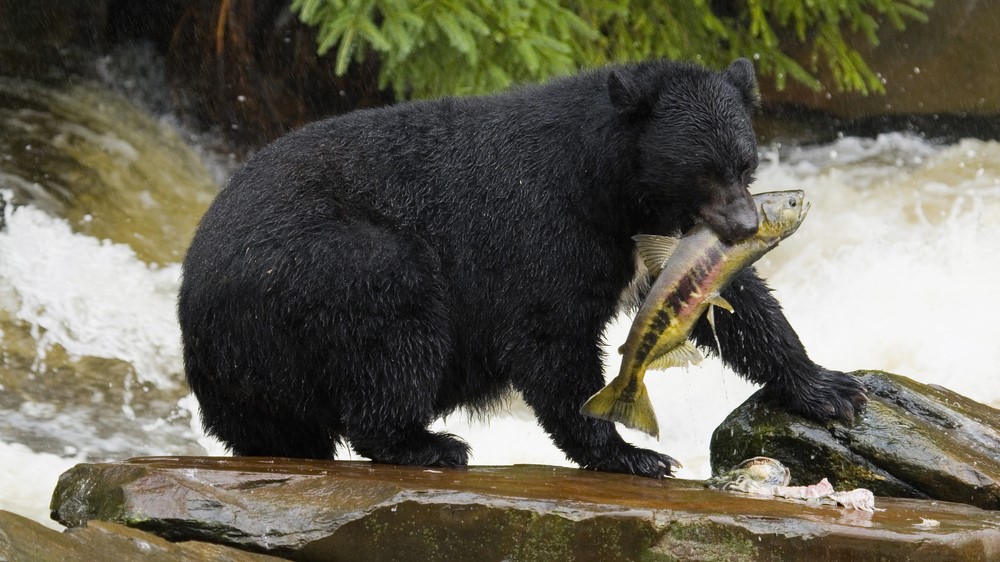 Bears don’t normally harm humans and often avoid encounters with people. However, bears occasionally attack to defend their cubs or food, and on extremely rare occasions kill humans to eat them. Seventy-eight people have been killed by black bears in the U.S. and Canada since 1900, compared to 84 killed by brown bears, according to the Florida Museum of Natural History. A 2011 study published in the Journal of Wildlife Management found that most fatal black bear attacks are caused by predatory male black bears. Predatory attacks occur when a bear attacks a human they see as prey.

The NPS recommends that people keep their distance from wild bears and avoid surprising them. If attacked by a black bear, a victim should fight back. Playing dead doesn’t fool black bears (although it might work with brown bears), so if a victim is unable to escape to a car or another secure location, they should use whatever objects are available and strike the bear in its face and muzzle.

What do black bears eat?

Black bears are omnivores and eat both plants and animals, with a wide diet that varies depending on their location and the time of year. Most of their diet is made up of insects, nuts, berries, grasses and other vegetation, according to the IBA.

Black bears are not active predators and only hunt when an opportunity for prey presents itself. Most of the vertebrates they eat are already dead, according to the University of Michigan’s Animal Diversity Web (ADW). If they do decide to hunt, black bears will go after young, hoofed mammals, such as elk, moose and other deer species, according to The National Wildlife Federation. Black bears in Canada and Alaska also feed on salmon.

Black bears are usually solitary except for the breeding season and when a female is raising her cubs, according to the Kentucky Department of Fish & Wildlife Resources. Males will seek out females for mating during the breeding season in June and July. Once she’s mated, a female black bear’s fertilized eggs won’t enter her uterus until the autumn, in a process called delayed implantation, according to ADW. This delay, followed by a 220-day gestation period, allows females to give birth in their winter dens, typically during hibernation.

Bears usually fatten up in late summer and fall as they prepare to hibernate through the winter months, from about November to March. They may feed for up to 20 hours, consuming up to 20,000 calories per day during this period, according to the Pennsylvania Game Commission.

Black bears create their dens in the ground, under a windfall or in a hollow tree or cave, or use a previously occupied animal den, according to the NPS. The hibernation length varies across the black bears’ range. Black bears in Mexico, for example, may not need to hibernate at all as the climate is mild and food remains available through winter. In contrast, black bears living in the colder environment of northern Alaska hibernate for about 7 months, according to Alaska Department of Fish and Game.

During hibernation, black bears lower their body temperature and heart rate and suppress their metabolism by 75% to reduce their energy needs, Live Science previously reported. They survive off fat reserves built up in late summer and fall but maintain much of their muscle mass so they don’t become weak. 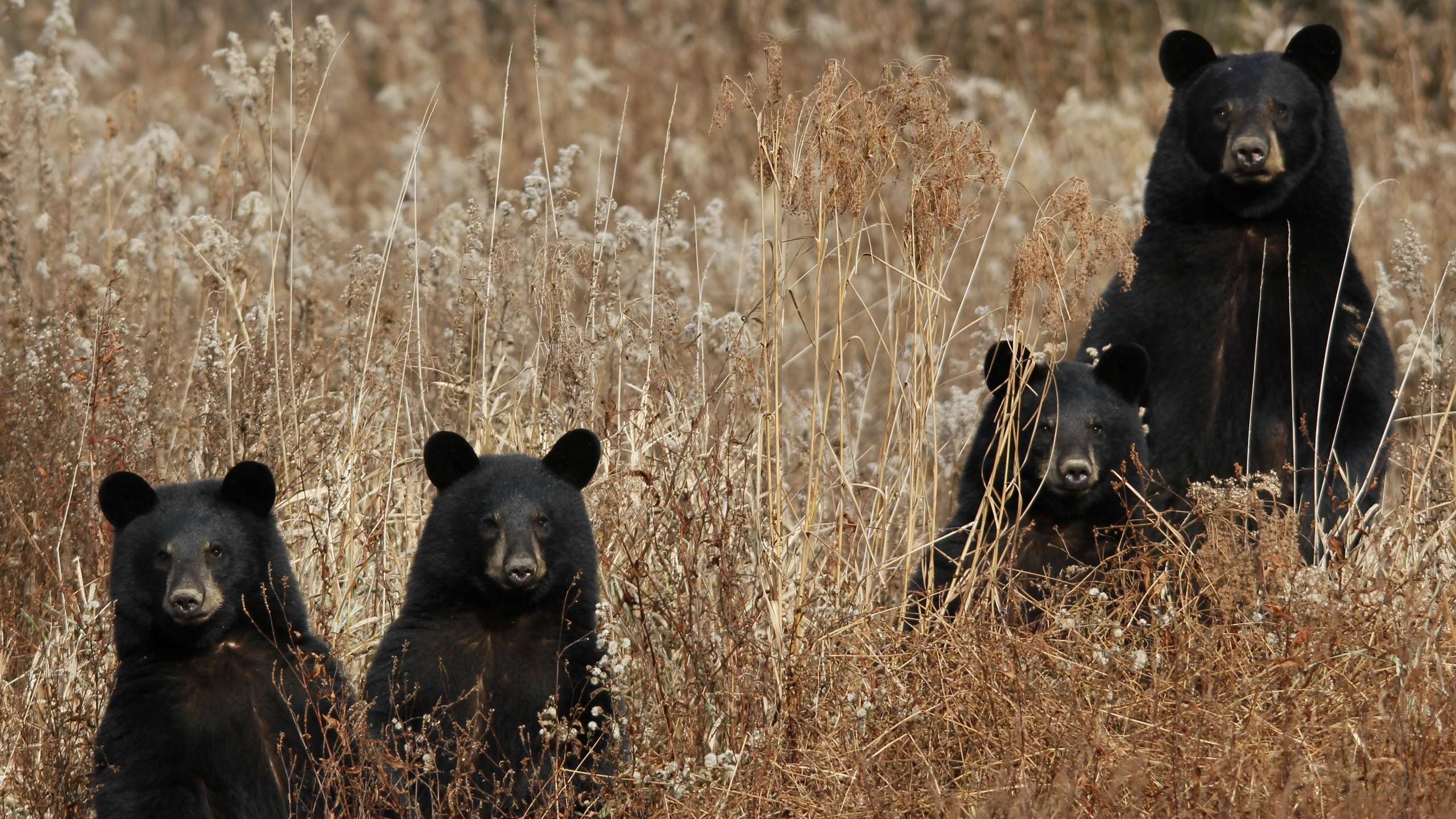 Female black bears typically give birth to two or three offspring in February during hibernation. Baby black bears, called cubs, weigh just 7 to 11 ounces (200 to 310 grams) at birth, according to the Arizona-Sonora Desert Museum. Black bear cubs stay in the den with their mothers until spring. The cubs are weaned before they reach 8 months old, but they won’t leave their mothers until they are about 17 months old, after hibernating with her during their second winter, according to ADW. 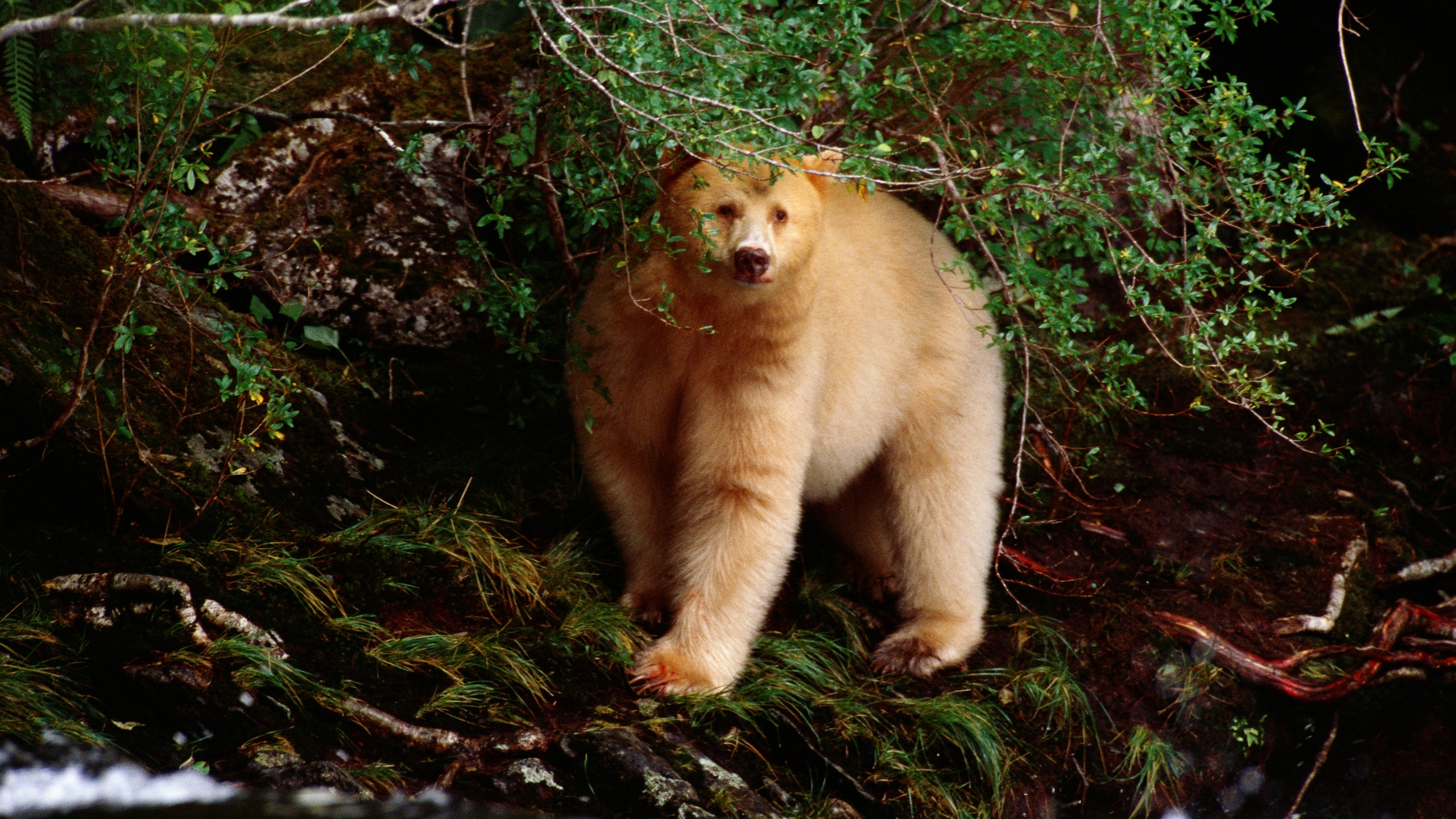 Kermode bears (Ursus americanus kermodei) are a subspecies of black bear in British Columbia, Canada that are sometimes white. White Kermode bears are also known as spirit bears, although they are part of the Kermode population and are not a separate subspecies. The highest concentration of spirit bears is found on Gribbell Island, off the north coast of British Columbia, where one-third of the black bears on the island are born white, according to The National Wildlife Federation.

Spirit bears’ white coats are caused by a mutation in a gene called mc1r. The gene is recessive, which means a bear cub will only be white if both of its parents carry the gene, according to The National Wildlife Federation. If only one parent carries the recessive gene then the cub will have a normal, black coat.

A 2009 study published in the Biological Journal of the Linnean Society found that white black bears are better at catching salmon than normal black bears during the day. This could be because the fish find it harder to see the white bears overhead as lighter coats blend in better with a bright sky background than black coats.

However, black bears are threatened in some parts of their range. Black bears are considered nationally endangered in Mexico due to deforestation, hunting and other human activities. Hunting black bears was banned in Mexico in 1985, and the population is now recovering and expanding thanks to conservation efforts, according to the IUCN.

Bears are regularly hunted and killed in the U.S. and Canada, but this is controlled and managed by state and provincial agencies. Other common threats to bears include residential and commercial development, agriculture, road building and high traffic densities.

Photosynthesis could be as old as life itself