Baja California has started administering more than 1.3 million Johnson & Johnson single shots donated to Mexico by the U.S. as part of a strategy that could lead to the reopening of the border.

This border state became the first in Mexico to open COVID-19 vaccination to people 18 years and over and is on its way to also become the first to reach herd immunity, according to Baja California’s secretary of health, Alonso Perez Rico.

On Thursday, the first day of this vaccination phase, more than 196,000 people were vaccinated with Johnson & Johnson doses in Baja California. “That’s a historic record for our state,” Perez Rico said.

This vaccination strategy is considered key to reopening the U.S.-Mexico land border crossing, which has been closed to nonessential travel since March 2020.

“We want to vaccinate the population of the 39 municipalities along the northern border so that the border can be opened as soon as possible. That is the goal,” said Mexican President Andrés Manuel López Obrador during his daily press conference Thursday.

Mexican Foreign Minister Marcelo Ebrard, who met this week with U.S. Secretary of Homeland Security Alejandro N. Mayorkas, said the objective is to accelerate vaccination “to reach normality as soon as possible.”

Covering the issues, politics, culture and lifestyle of the Latino community in L.A., California and beyond.

Covering the issues, politics, culture and lifestyle of the Latino community in L.A., California and beyond.

Covering the issues, politics, culture and lifestyle of the Latino community in Los Angeles, California and beyond.

“Secretary [Mayorkas] noted that facilitating trade, tourism and travel is his priority. We concur,” Ebrard tweeted.

This shipment of 1.3 million vaccines was designated entirely for Baja California by decision of the Mexican government.

“We are the pilot state,” Perez Rico explained. “We are seeing if it is feasible in a fast, efficient and expedited way to vaccinate the entire population, and we were given the opportunity.”

Once the vaccinations are completed in Baja California, the strategy will continue in the border municipalities in the states of Sonora, Chihuahua, Coahuila, Nuevo León and Tamaulipas, López Obrador said. 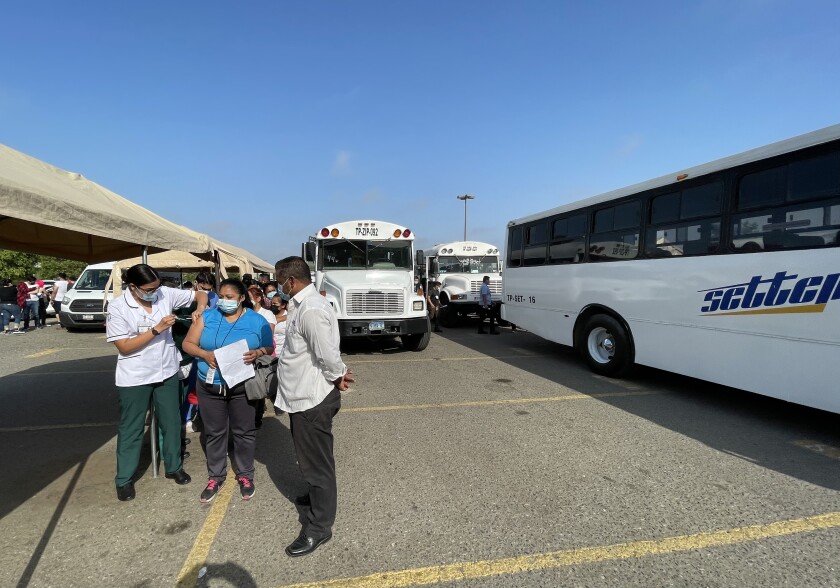 Buses transported employees from maquiladora companies to be vaccinated Thursday at the vaccination center at the Autonomous University of Baja California. (Alexandra Mendoza / San Diego Union-Tribune)

Thousands of people in Tijuana lined up Thursday starting early to be the first to get a shot. Some even brought blankets to spend the night in line.

Many had been waiting for their turn for the COVID-19 vaccine for so long that they did not mind waiting a few more hours.

The news surprised some, such as Sebastián Gandon, who acknowledged he did not expect to get the vaccine this soon.

“I thought they were [not] going to vaccinate us until next year,” said the 18-year-old student, who was vaccinated at the Autonomous University of Baja California. “Now I feel safer, with less fear of getting COVID.” 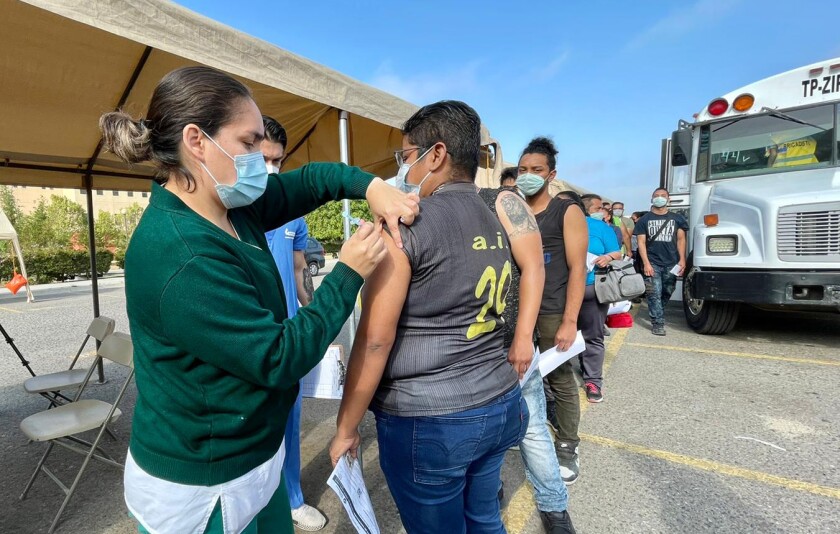 A nurse at work at the vaccination center Thursday at the Autonomous University of Baja California.(Alexandra Mendoza / San Diego Union-Tribune)

Brayan Padilla, 33, said he was excited to finally receive the immunization. A few months ago, he lost his mother and aunt to COVID-19. “Right now, getting the vaccinate is something that motivates us, especially for our family.”

Health authorities anticipate that some eligible people in Baja will choose not to be vaccinated. Also some with dual citizenship or legal permanent residency have already been vaccinated in the U.S.

As of Friday, 25% of the eligible population has been fully vaccinated in Baja. Officials said they hope the numbers will keep rising in the upcoming days.

Will we all need COVID-19 booster shots?

The Cornish hut that gave rise to sea level benchmark

What Is The Higgs Boson?