It’s baby-animal season in the towns north of New York. But with many of the mothers gone missing, humans are stepping in to help out.

Fawns rescued by Animal Nation, a nonprofit animal-rescue group in Rye, N.Y. When the facility is overcrowded, Patrick Moore, the group’s volunteer president, harbors baby deer in his home shower.

A fawn’s first role model is the forest floor. The white spots on its brown coat resemble the dappled beams of sunlight that cascade through the trees, breaking up the outline of the deer’s figure. The camouflage helps keep baby white-tailed deer safe from bears and bobcats as the mother doe forages elsewhere.

While its mother is away, the fawn hides in tall grass and remains vigilant — eyes open and ears pricked, listening for movement. When the doe returns, she feeds her baby milk and licks it all over to remove its scent. She licks its genital areas to coax the fawn to urinate or defecate, and then she may even eat its waste. Her cleaning ensures that predators will not detect a whiff of her baby.

But sometimes the doe does not return — hit by a car, perhaps. If the fawn is left alone for too long, its ears curl up, a sign of dehydration, and flies may cloud around its uncleaned body, drawing attention. The youngest deer are often too weak to stand, and in New York’s Westchester County, many are found beside the bodies of their dead mothers on the side of the road, according to Patrick Moore, the president of Animal Nation, a nonprofit animal-rescue group based in Rye, N.Y.

“The hardest thing is not letting them imprint,” Mr. Moore said. A cuddled baby deer can easily come to think of itself as a human, too, making it difficult to release the animal back into the wild. So Mr. Moore is swift and silent with his work. He keeps orphaned fawns together so they can bond with their own kind. During baby season, which peaks from May to September, he rarely gets more than four hours of sleep at a time.

Transferring a red-tailed hawk.Capturing a coyote with a catchpole.A great blue heron that was electrocuted by landing on an uninsulated or improperly grounded wire.A feral kitten will be vetted and put up for adoption.

After all, baby season is more than fawns. There are baby groundhogs, baby hawks, baby great horned owls and baby squirrels, which arrive in multiple litters from spring to fall. Many are injured and diseased, and most are unable to fend for themselves.

Their cases illustrate the ongoing tension between the suburban and the wild, and the tragicomic interactions that can ensue. Even as Mr. Moore tends fawns in his shower, many suburbs are struggling to lower their deer populations. In New York, a deer-vehicle automobile collision occurs every eight minutes, with 9,700 from October through December of 2016, according to analysis of New York Crash Data by AAA Northeast. The ungulates can also destroy gardens, feed on crops and spread Lyme disease.

Although he is president of Animal Nation, Mr. Moore is an unpaid volunteer. He has a full-time job as a firefighter in the Bronx. This cumulative rescue work is exhausting, and Mr. Moore is burned out. But if there is space in his own home, he can’t help but help the animals. “People say, ‘Let me visit your facility,’” he said. “And I say, ‘You’re coming to my bathroom.’”

Animal Nation, one of the few rehabilitation centers in Westchester, often reaches capacity and has to stop taking in new creatures before the end of the year. But calls skyrocketed during the pandemic, as people once cocooned in offices began spending more time outside. They found fawns orphaned near bike trails and fledglings fallen from their nests. Many city residents moved to the suburbs, and some first-time homeowners were greeted by attic-bound swarms of bats or flying squirrels, according to Jim Horton, the owner of QualityPro Pest & Wildlife Services in Hawthorne, N.Y.

Runaway animals are as L.A. as car chases. Here’s why they…

Some wildlife-control specialists euthanize so-called nuisance animals, but Mr. Horton takes the animals he relocates to rehabbers. He also assists Animal Nation on many of its more difficult calls. A few weeks ago, Mr. Horton climbed a 40-foot ladder to pull a baby raccoon out of a tree. Earlier this year, he rounded up a family of swans trying to cross a parkway and dropped them off at a nearby lake. He was also called out to aid a bald eagle that someone thought was hit by a car, but turned out to have lead poisoning. 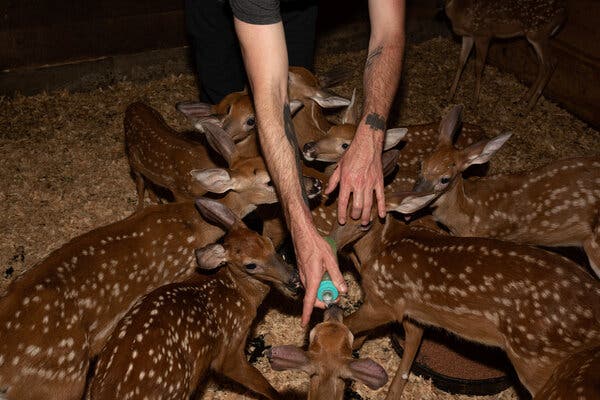 Mr. Moore of Animal Nation hand-feeding fawns. Some were orphaned when their mothers were killed by cars or hunters; others were brought in by people who mistakenly thought they had been abandoned.Linda Kuo

Many of the calls that Animal Nation receives pertain to baby animals in no distress at all. Last week, someone called Mr. Horton about a baby bird she had found in her yard and placed in a box. Mr. Horton had a hunch that the bird’s mother might have been nearby, so he took the bird back outdoors and out of the box; like clockwork, the mother robin flew down to feed her newly freed chick.

This mistake often happens with fawns left by their mothers in backyards, which can appear abandoned to the well-intentioned onlooker. “In the case of humans, the enemy of your enemy is your friend,” said Asia Murphy, a postdoctoral researcher at the University of California, Santa Cruz, who has used camera traps to study fawns in Pennsylvania. Coyotes, bobcats and black bears avoid humans, so living alongside people can offer additional safety to a deer, Dr. Murphy said.

When Mr. Horton gets a call about a fawn, he asks about its ears (are they curled?) and its hygiene (are there flies?). If both answers are no, Mr. Horton advises the caller to leave the fawn alone for the night; more often than not, the mother doe will move her baby to a new spot the next day.

The year of the parasite

In any given year, wildlife rehabbers can never predict what kinds of calls might come in more often. This year appears to be the year of the parasite, Mr. Moore said. He and other rehabbers are overloaded with waterfowl riddled with gapeworm, a parasite that lives and breeds in a bird’s trachea and causes it to gasp or shake its head. Many of the fawns that the group has taken in have E. coli and consequently suffer from diarrhea. Mr. Moore suspects that the baby deer get it from the soil they eat.

“We have this perfect hot, humid, wet summer, which is what parasites thrive in,” Mr. Moore said, adding that the winters that used to freeze and kill off soil-bound parasites each year are growing warmer.

A baby screech owl found on the street.Waterfowl and other birds being released after sheltering overnight.Rescued mallard ducklings.A dying fox in a front yard.

Mr. Moore first became a licensed wildlife rehabilitator in New York State at 16 and hand-fed baby birds in his mother’s house. Back then, he wanted to help every animal he possibly could.

Now, at 32, he yearns for more systemic change. “People call you for that one little fawn,” he said. “But are we doing tons of research and are we keeping good track of what animals have what problems?” Mr. Moore often sends samples to state-run pathology labs. But resources are limited, especially for species that are considered invasive or populations that are not threatened. There is always money and concern for bald eagles and peregrine falcons, but less so for squirrels and deer, Mr. Moore said.

When licensed wildlife rehabilitators in New York work with an animal that is too weak to recover, the only legal way they can euthanize the animal is by breaking its neck. Mr. Moore has never done this, he said, opting instead to work with veterinarians who offer their time pro bono.

For some of the animals that Animal Nation takes in, euthanasia is the most humane option. Mr. Horton recently received a call about a fawn abandoned on the football field at Pace University. From a distance, the fawn appeared fine. But as Mr. Horton approached it, the young deer stood up and revealed a twist in its neck: a birth defect, and the reason its mother abandoned it. Mr. Horton picked up the fawn and put it on the floor mat of his car’s passenger seat, where it curled up while he drove. The fawn’s birth defect meant it had to be euthanized.

Some fly away, others returnA rehabilitated barred owl prepares for release.

The volunteers of Animal Nation receive up to 100 calls a day, and it is impossible to answer them all. As we spoke on the phone, a beleaguered Mr. Moore had just received a call about a baby pigeon in nearby Putnam County. He was also waiting to hear whether a rescued raptor could be admitted to The Raptor Trust center in Millington, N.J., an hour’s drive away. The facility, which has spacious flying enclosures to help injured birds learn to fly properly, has a waiting list.

“I don’t want to give up on the little critters,” Mr. Moore said. But his 16-year-old self would not have necessarily signed up for this unsustainable workload. “We need paid rehabbers,” he said. “We need paid staff. We’re doing the best we can.”

As baby season ekes on, the fawns at Animal Nation will continue to wean and grow steadier on their once-wobbly legs. The state requires all deer to be released by Sept. 10, so Mr. Moore plans to do a soft release of the fawns in August. “We open the doors and continue to feed them,” he said. “We let them come and go as they need.”

Many of the animals that pass through the doors of Animal Nation will leave the facility never to be seen again. Birds fly away. “Possums couldn’t give a damn about you,” Mr. Moore said.

Others, such as food-seeking squirrels, know to come back. And sometimes the fawns return to Animal Nation as early as the following year, their legs broken by cars. Mr. Moore said that it was easy to spot a mature deer he rehabilitated as a fawn. “They’ll come closer than a deer should,” he said. “And you know it’s your baby.”

Roy is a gracious, elderly gentleman who stands on the wrong side of the gate when you open it

WHO asks vaccine makers to prioritize doses for poor…

Q & A with Victoria Aveyard