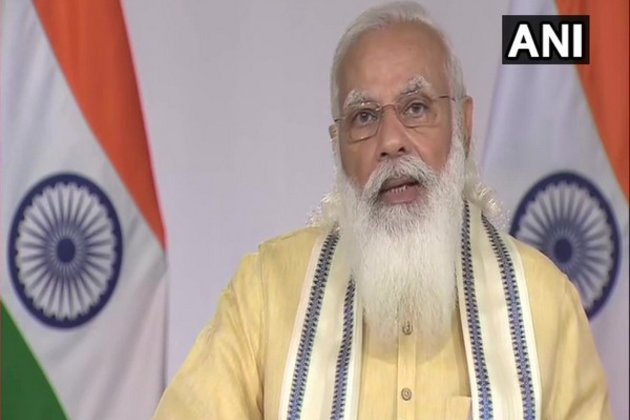 New Delhi [India], June 7 (ANI): Prime Minister Narendra Modi on Monday announced that the Centre will provide free COVID-19 vaccine to all Indian citizens above 18 years of age from June 21 and it will handle the 25 per cent vaccination that was with states till now under the liberalised plan announced earlier.

In a televised address to the nation, the Prime Minister said the Centre will procure 75 per cent of the total production of the vaccine doses and provide them free to the states. No state government would be spending anything for vaccines.

The liberalised vaccination policy had come into effect from may 1 in which all people above 18 years were made eligible for vaccination. The policy entailed the Centre getting 50 per cent vaccine supply and 50 per cent to be procured under ‘other than Government of India channel’.

Many Chief Ministers had over the past few days urged the Centre to procure vaccines and supply to them due to procurement constraints faced by them.

The Prime Minister said that both the Centre and states will start working to new guidelines in two weeks.

The Prime Minister said that crores of people have got free vaccines and 18 years segment has been added to this.

The opposition parties had been making demand for “universal free vaccination”.

In another major announcement, the Prime Minister said conveyed that the Pradhan Mantri Garib Kalyan Anna Yojna will be extended till Deepawali.

“In this time of pandemic, the government is standing with the poor to meet his needs. It means that till November, more than 80 crore people in the country will get requisite amount of free foodgrains,” he said.

Recalling the unprecedented rise in the demand for the medical oxygen during the second wave of pandemic in April and May, the Prime Minister said that the challenge was met on war-footing by deploying all systems of the government.

He said that this level of demand for medical oxygen was never experienced in the country’s history.

Noting that globally vaccine producing companies and countries are far less than what is the global demand for the vaccines, he said in such a scenario, ‘Made in India’ vaccine was critical for India.

He pointed out that in the past, India used to get vaccines decades after they were developed abroad and this always resulted in a situation in which the country could not even start vaccination while other countries used to finish the vaccine work.

“By working in mission mode, we raised the vaccination coverage from 60 per cent to 90 per cent in 5-6 years. We not only enhanced the speed but also widened the ambit of vaccination,” he said.

He said that not just one but two made-in-India COVID vaccines were launched in India through clean intentions, clear policy and constant hard work.

“Our scientists proved their calibre. Till today, more than 23 crore vaccine doses have been administered in the country,” he said.

The Prime Minister recalled that Vaccine Task Force was constituted when there were a few thousand COVID-19 cases and the vaccine companies were supported by the government in all possible ways in trials and funding for research and development.

He said vaccine supply will increase in coming days due to various steps taken and noted that seven companies are producing different type of vaccines and trials of three more vaccines are in the advanced stage.

The Prime Minister also talked of trials for two vaccines for children and a ‘nasal vaccine’.

He also referred to differing views in various quarters on the vaccination drive.

He said as coronavirus cases started declining, questions were raised about the lack of choice for states and some people questioned why the central government was deciding everything and noted that arguments such as ‘one-size-does-not-fit-all’ were raised.

The Prime Minister said India’s vaccination programme was run mostly under the central government from January 16 till April end and ‘free vaccination for all’ was moving forward and people were showing discipline in getting vaccinated.

In the midst of this demands for decentralization of vaccination were raised, decision about priority to certain age groups were raised. Many types of pressures were exerted and certain sections of media took it as a campaign.

The Prime Minister warned against the people who were spreading rumours against vaccination and said they are playing with the lives of people and there is a need to stay vigilant against them. (ANI)
Source

Giraffes: The trouble with being tall

The secret to T. rex‘s incredible biting force is at last…

Fish get addicted to meth in polluted rivers, go through…