Charlie went to the groomer for a bath and a trim. Within hours, he was dead 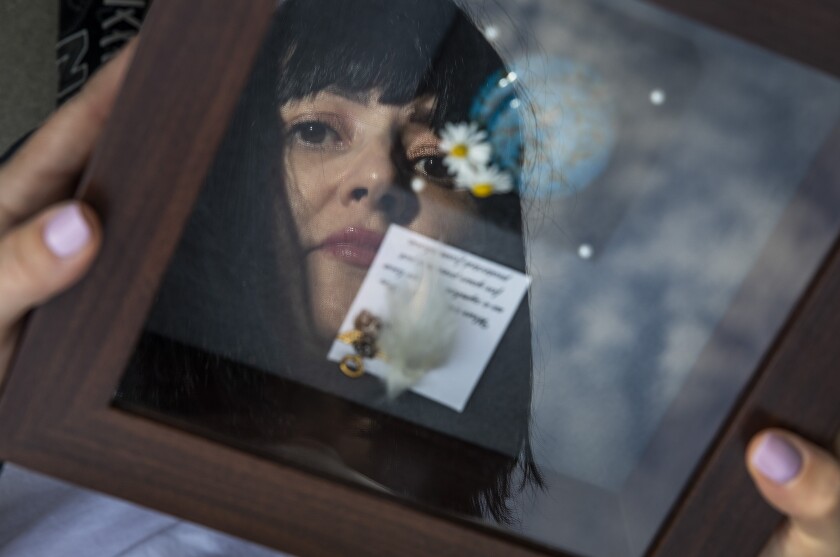 Tamara Margolis learned about her beloved Maltipoo’s fate from a phone message.

The dog groomer’s voice was thick with tears.

“The vet said that they performed CPR for about 20 minutes,” the groomer said. “But he was nonresponsive.”

Hours after Charlie arrived at the Healthy Spot pet store in West Los Angeles for a routine bath and trim, he was dead.

The 4-year-old had been strangled by a noose used to restrain dogs during grooming. Twenty-six minutes near the end of the fluffy white dog’s life were captured on video that the California chain allegedly uses to make sure its employees work quickly enough.

Margolis is a plaintiff in a class-action lawsuit filed Monday in Los Angeles County Superior Court, alleging that the Culver City-based chain — a self-described “natural pet store inspiring healthy pet lifestyles” — has a “conveyor-belt style approach to dog grooming” that results in “serious injuries and deaths of innocent, vulnerable dogs, devastating their owners.” 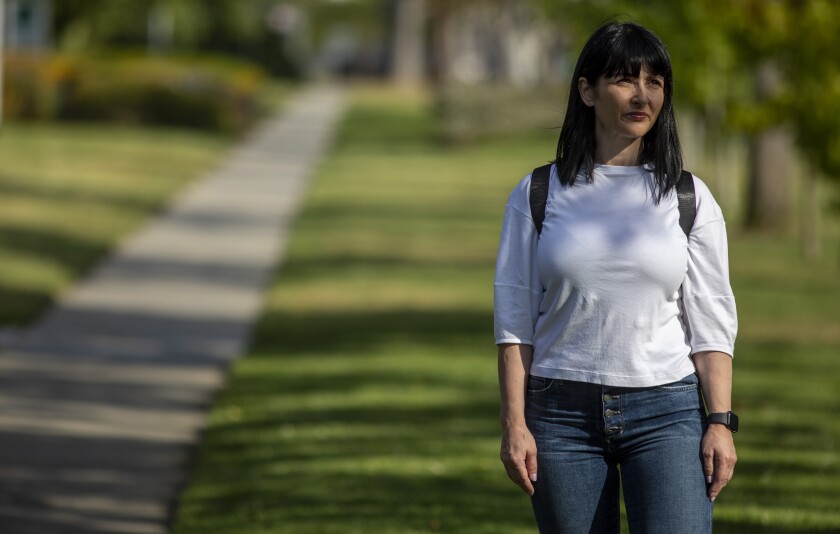 Tamara Margolis stands next to a leafy sidewalk path, one of the favorite places she used to walk her dog Charlie in Los Angeles.(Brian van der Brug / Los Angeles Times)

Healthy Spot has 20 stores in the state, most in L.A. County. The lawsuit alleges that the 13-year-old chain encourages employees “to put profits over safety of the dogs they groom.”

The industry ranges from giant retailers such as Petco and PetSmart to mom-and-pop storefronts. Healthy Spot is just a small part. Critics allege the industry has serious safety problems, with dangers posed by nooses, hair dryers and poor handling by groomers.

“The noose is a significant danger,” said Daphna Nachminovitch, senior vice president of cruelty investigations with People for the Ethical Treatment of Animals. “The handling has to be humane…. We’ve seen animals perish of heat prostration in the cages because somebody forgets to turn off the dryer…. [Injuries] are so much more common than you think.”

The grooming industry is unregulated in California and most other states, and there are no statistics about grooming safety. But Teri DiMarino, president of the California Professional Pet Groomers Assn. Inc., defends the nation’s groomers and vouches for their safety records.

“Every time a groomer hears of an incident like this, we all cringe,” DiMarino said. “We all suffer. We know we’ll get questions from clients. But one bad haircut doesn’t make a bad hairdresser…. When there are thousands and thousands of pets being groomed safely every day, you have to look at that, too.”

Andrew Kim, the company’s chief executive, said in a written statement that “our Healthy Spot family was heartbroken by Charlie’s death and by the injury sustained by Noel under our care.

“Our number one priority is the safety of the thousands of animals under our care every year — and we always assume full responsibility for the extremely rare cases when accidents occur,” he said. “We have done so in both of these cases. This lawsuit totally misrepresents who we are and how we operate — and we are confident it will be quickly dismissed.”

The Healthy Spot video showing Charlie’s April appointment starts normally enough. Plaintiffs’ attorney Gary Praglin said he first viewed the video with Kim in May at the company’s headquarters. It is now part of the lawsuit.

A groomer wearing a green T-shirt with the company logo on the back — “Mind Body Bowl” — places Charlie on a raised grooming platform.

The dog is damp, freshly bathed and wrapped in a towel. There is a green lead looped around Charlie’s neck. The groomer snaps it to a metal arm that curves over the platform. DiMarino said such a system to tether dogs is commonplace in the industry and is “the equivalent to your seat belt.”

Over 26 minutes, as the groomer blows the dog dry and combs his ears, Charlie gets fluffier and much more agitated. He squirms and strains against the noose. The groomer tightens the contraption so the lead is short and taut and the dog cannot lie down. He pulls Charlie’s tail straight up to lift the dog’s hind quarters off the table. The dog soils himself.

The video is silent. Charlie’s mouth opens and closes over and over as if he is yelping or gasping for breath.

Two employees raced Charlie to a nearby veterinary hospital. He had no pulse. Veterinary staff performed CPR and intubated him. For a moment, a faint pulse returned and then stopped. Charlie was dead.

When Margolis, who is an ICU nurse, arrived at the hospital, she was escorted to a quiet room. Charlie’s body was still warm.

“I sat there for, like, hours hugging him,” she said. “I knew this was the last time for me to be physically with the dog.”

Healthy Spot CEO Kim “reached out to me two days later,” said Margolis, who lives in Culver City. “He expressed his condolences, that he felt really bad.” And he offered to pay for the autopsy she ordered.

“Thousands of people have had their pets groomed at Healthy Spot,” Praglin said. “We don’t know how many of their dogs have been harmed. This lawsuit seeks to get them to change their grooming policies so they aren’t harming dogs anymore.”

The suit filed Monday alleges that Healthy Spot violates California law by misrepresenting its employees’ qualifications and using false and misleading advertising, among other charges. It asks the court to order the company to follow the law and to make its grooming practices safe.

The lawsuit was filed on behalf of all Healthy Spot customers whose dogs were harmed by grooming at any of the company’s locations between July 2018 and July 2021. Plaintiffs also want the company to cover the cost of grooming, veterinarian bills, attorneys’ fees and legal expenses, as well as punitive damages.

Aimee Tully of Newport Beach is the second named plaintiff in the class-action suit. In January, she brought Noel, her 10-year-old rescue Pomeranian, to the Costa Mesa Healthy Spot for a bath. A couple hours later, the manager called. 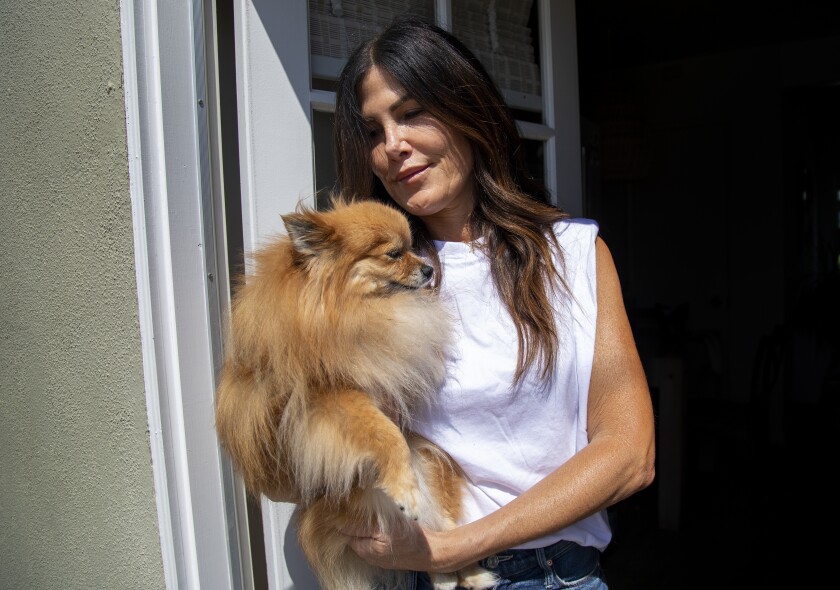 Aimee Tully of Newport Beach holds Noel, her Pomeranian who went to the groomer and came home with a crushed tail on July 9, 2021, in Newport Beach. Noel had to have her tail amputated.(Gina Ferazzi / Los Angeles Times)

She told Tully that “there’s been an incident,” Tully recounted. Noel “has a small cut on her tail…. It looks very minor, but it’s bleeding a lot. We want you to meet us at our vet.”

The “small cut” was a deep laceration. Bones in the small dog’s cream-and-red tail had been crushed. Noel underwent emergency surgery. Nearly five inches were amputated, leaving a small stump and a lasting case of anxiety.

Tully watched the video of the incident that injured Noel, a fox-red puffball on very short legs. It shows a groomer holding Noel up by the chest with her legs on the platform. The groomer used a dematting brush to “aggressively” brush out the dog’s tail.

Early in July, the tiny dog seemed boisterous and happy as she played with Tully’s other Pomeranians, an 11-year-old rescue named Myshka and a 10-year-old foster named Ace. The fur has grown back on Noel’s stump of a tail; it had to be shaved for surgery.

But Tully said Noel is “not 100% there. She’s terrified when I take her to the vet. I groom her at home. It’s awful and heartbreaking to watch.”

In a video posted on Healthy Spot’s website, Kim and co-founder Mark Boonnark accepted responsibility for the incident, noting that they covered Noel’s vet bills and would continue to do so.

But they accused Tully’s daughter, Riley Tully, of conducting a “smear campaign” against them and trying to extort money from them on social media.

Praglin said his firm was not representing the Tullys at the time.

Healthy Spot spokesman Nathan Miller said in an email that the company records grooming sessions “to ensure that all staff are following our rigorous safety protocols.”

The footage in the lawsuit was “selectively edited” and “stolen” from company security cameras in violation of employee privacy, he said.

“We are deeply concerned about methods and motivations of the attorney who filed” Monday’s lawsuit, he said, adding that Praglin was in negotiations with the company before breaking off contact.

Biggest sharks in the world

‘Fin’ Review: Eli Roth Wants to Save the Sharks

Can parts of our immune system lead to a cure for cancer?