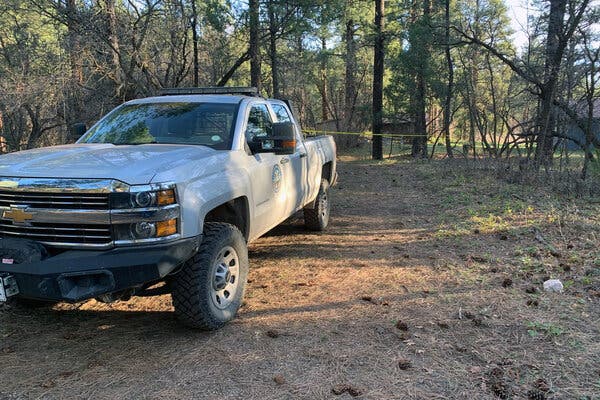 The body of a 39-year-old woman in rural Colorado who went missing Friday morning while on a walk with her two dogs was found hours later by her boyfriend, and officials said there were signs she had been attacked by a bear.

In a search of the area, alongside Highway 550, near Trimble, about a hundred miles south of Telluride, state parks and wildlife officials found not one bear, but three: a grown female black bear and two smaller bears around a year old. Officials euthanized them and found human remains in the grown bear and one of the yearlings.

“A dangerous bear that’s had a fatal attack and the consumption of a person is not something we can allow to be out there on the landscape,” said Jason Clay, a spokesman for Colorado Parks and Wildlife.

The attack took place on private property alongside the highway, Mr. Clay said. The woman, who has not been identified, had gone for a walk in the morning, and when her boyfriend returned to their home that evening, he found their dogs outside the house.

After searching for an hour, the boyfriend found the body of his missing girlfriend and called 911, officials said.

The dog team found the bears, and Colorado parks and wildlife officials euthanized them, Mr. Clay said. The female bear was more than 10 years old, and the younger ones were about a year old and had probably been born over the winter, Mr. Clay said.

Cory Chick, another parks and wildlife spokesman, said in a statement that it was “very likely” the bears would have attacked again.

“Once a bear injures or consumes humans, we will not risk the chance that this could happen to someone else,” he said.

Last month a backcountry guide just west of Yellowstone National Park in Montana was killed by a large grizzly bear. But in Colorado, there had not been a fatal bear attack since 2009, officials there said.

There have been three fatal attacks recorded in Colorado in the last 50 years. In 1971, a 31-year-old camper was killed when a bear attacked his tent. In 1993, a man was killed inside his camper after trying to defend himself by shooting a bear in the rib cage. In 2009, a 74-year-old woman was killed after she had been illegally feeding bears through a fence in her yard, officials said.

State authorities estimate there are 17,000 to 20,000 black bears in Colorado, where the parks and wildlife officials try to educate people on bear safety.

“We share a lot of the same spaces,” Mr. Clay said. Around this time of year, bears become active since they are coming out of hibernation. “They’re going to be on the search for food,” he said.

In a statement on Saturday, he said, “This is a tragic event and a sad reminder that bears are wild and potentially dangerous.”

Officials said they were not sure what led to the latest attack, and an autopsy was planned for Tuesday.

Mr. Chick said that “it is important for the public not to cast blame on this woman for the unfortunate and tragic event.”

He added: “There are inherent risks anyone takes when venturing outdoors.”

The Latest Coronavirus Comes From Dogs