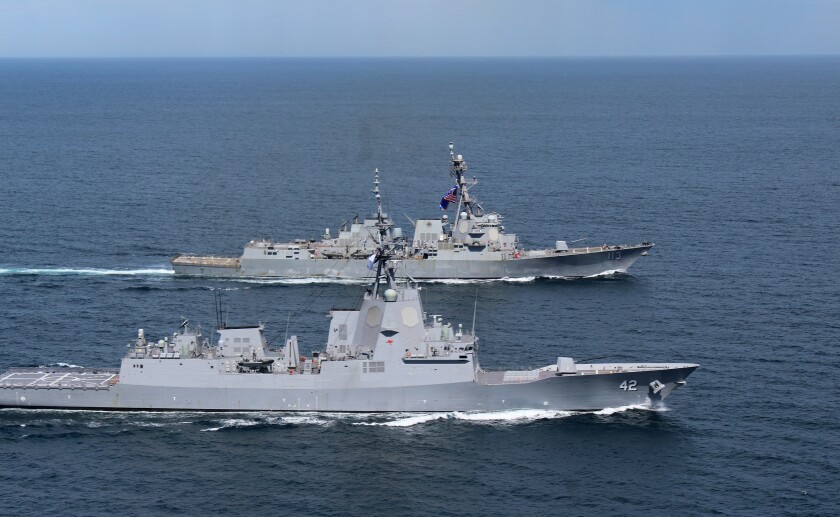 And their size is no trivial matter.

The larger carcass belonged to a female adult measuring 65 feet long, according to the National Oceanic and Atmospheric Administration. The other was much smaller at 25 feet long, probably a calf.

The whales were discovered as the Sydney berthed at Naval Base San Diego, the Australian navy said in a statement.

Experts say the physics of the situation are somewhat common — even if the presence of more than one whale makes this scenario rare.

Large vessels frequently strike fin whales inadvertently and unknowingly, and the dead whale remains wrapped around the bow, held in place by pressure as the boat moves forward.

“Oftentimes, [mariners] don’t know until they come in and stop,” said Justin Viezbicke, coordinator of NOAA’s California Marine Mammal Stranding Network. “That’s when the whale falls off and floats out.” 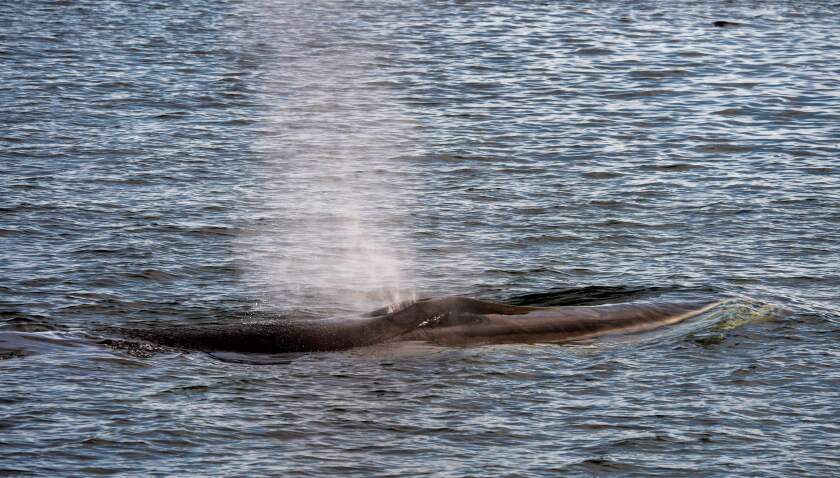 A fin whale swims in the waters of Cape Cod Bay near Provincetown, Mass.(AFP/Getty Images)

The Sydney, a Hobart-class guided missile destroyer, has been in Southern California-area waters since April conducting joint exercises with the U.S. Navy. At 481 feet long, the ship is slightly smaller than the U.S. Navy’s Arleigh Burke-class destroyers.

It is the ship’s first deployment after being commissioned in May 2020. The Sydney is conducting combat system sea qualification trials on its Aegis weapons system, which will allow the ship to integrate with allied forces in future missions, according to a news release from the U.S. 3rd Fleet.

It is unknown where the ship may have struck the whales.

“The U.S. Navy and the Royal Australian Navy are cooperating with the NOAA Fisheries and other agencies to review the incident,” Australia’s Department of Defense said in a statement. “The Navy takes marine mammal safety seriously and is disheartened this incident occurred.”

Navy crews at the base tied the carcasses to a dock against booms to prevent the whales from drifting into the harbor’s traffic lanes. NOAA scientists took skin and blubber samples, which will be analyzed at the Southwest Fisheries Science Center in La Jolla.

The tests will be able to confirm whether the whales are mother and calf or unrelated. The gender of the calf will also be revealed.

The larger whale was towed out to sea by a large boat, while the smaller whale was hauled to Miramar Landfill. The calf appeared to sustain significant damage, because there were fears the carcass may not hold together during a tow at sea.

“We think it’s somewhere in the neighborhood of 5% or less of the number of ship strikes occurring are getting documented,” said Calambokidis, a senior research biologist and a founder of Cascadia Research Collective, a nonprofit based in Olympia, Wash.

According to NOAA, 14 fin whale ship strikes were reported off the coast of California from 2011 to 2020.

Fin whales, the second-largest whale species, seem to be particularly susceptible to strikes, as are their larger blue whale cousins, which have been more intensely studied, Calambokidis said. There are a few reasons for that.

“We’ve put tags on blue whales and documented near misses, and monitoring their behavior showed us they made very little response to the approach of a ship,” he said. “They didn’t alter speed or direction of travel, and only in a few cases did they alter their diving behavior.”

Fin and blue whales are also frequently found in shipping lanes, and they spend a lot of their time at the surface, particularly at night, he said.

Fin whales joined the endangered species list in 1970 because of commercial fishing, and estimates put about 8,000 off the West Coast, according to NOAA. They appear to be flourishing off Southern California.

Troy Sears, who runs whale-watching trips through Next Level Sailing, said it’s not unusual to see as many as 30 fin whales a day on excursions 10 to 20 miles offshore.

“There’s more fin whales off our coast now than I’ve ever seen in my career,” he said.

That’s where the ocean depth drops from 500 feet to 3,000 feet. “They like being in that transitional area,” Sears said. It’s also where the krill they feed on thrives.

Military ships are almost always in the area, Sears said.

He hopes this incident will inspire more collaboration to prevent strikes.

“The combination of using technology, science and the benefit of us being out there every day, we can start giving real-time information on the high density of animals, for the Navy in particular,” Sears said.

NOAA officials said these incidents are studied with prevention in mind.

“We are reviewing the incident and will try to understand, observe and learn from it if we can, in terms of what may help us avoid this type of thing in the future,” said Michael Milstein, a NOAA spokesperson.

Could we build a real-life Jurassic Park?

Wild Horses Adopted Under a Federal Program Are Going to Slaughter

Beautiful Bone Carving From 51,000 Years Ago Is Changing Our…

Mysterious Mineral Only Ever Seen in Meteorites Inexplicably…