Sizzling heat, unimaginable pressure and some surprise diamonds: It’s all there, deep beneath us 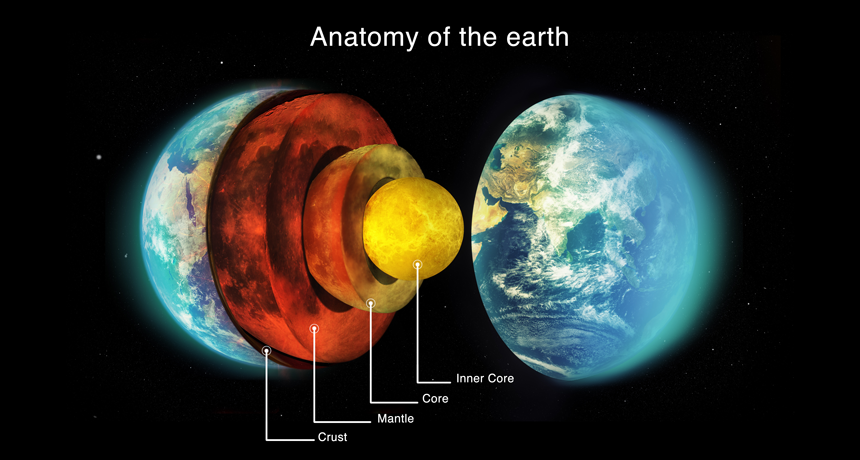 Mountain ranges tower to the sky. Oceans plummet to impossible depths. Earth’s surface is an amazing place to behold. Yet even the deepest canyon is but a tiny scratch on the planet. To really understand Earth, you need to travel 6,400 kilometers (3,977 miles) beneath our feet.

Starting at the center, Earth is composed of four distinct layers. They are, from deepest to shallowest, the inner core, the outer core, the mantle and the crust. Except for the crust, no one has ever explored these layers in person. In fact, the deepest humans have ever drilled is just over 12 kilometers (7.6 miles). And even that took 20 years!

Still, scientists know a great deal about Earth’s inner structure. They’ve plumbed it by studying how earthquake waves travel through the planet. The speed and behavior of these waves change as they encounter layers of different densities. Scientists —  including Isaac Newton, three centuries ago — have also learned about the core and mantle from calculations of Earth’s total density, gravitational pull and magnetic field.

Here’s a primer on Earth’s layers, starting with a journey to the center of the planet. 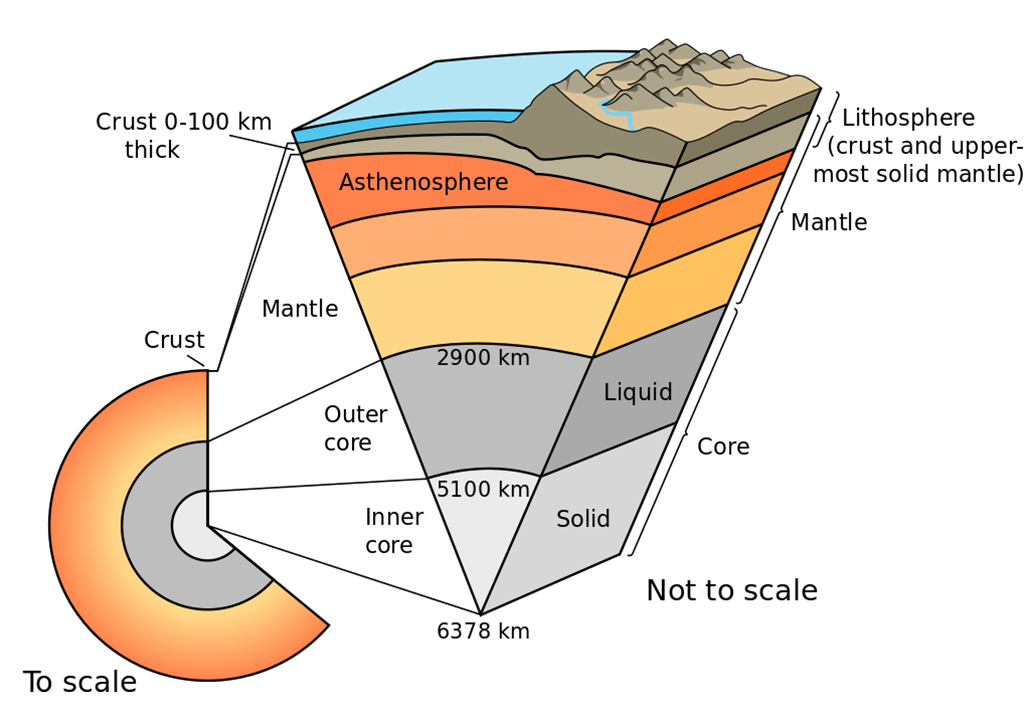 This solid metal ball has a radius of 1,220 kilometers (758 miles), or about three-quarters that of the moon. It’s located some 6,400 to 5,180 kilometers (4,000 to 3,220 miles) beneath Earth’s surface. Extremely dense, it’s made mostly of iron and nickel. The inner core spins a bit faster than the rest of the planet. It’s also intensely hot: Temperatures sizzle at 5,400° Celsius (9,800° Fahrenheit). That’s almost as hot as the surface of the sun. Pressures here are immense: well over 3 million times greater than on Earth’s surface. Some research suggests there may also be an inner, inner core. It would likely consist almost entirely of iron.

This part of the core is also made from iron and nickel, just in liquid form. It sits some 5,180 to 2,880 kilometers (3,220 to 1,790 miles) below the surface. Heated largely by the radioactive decay of the elements uranium and thorium, this liquid churns in huge, turbulent currents. That motion generates electrical currents. They, in turn, generate Earth’s magnetic field. For reasons somehow related to the outer core, Earth’s magnetic field reverses about every 200,000 to 300,000 years. Scientists are still working to understand how that happens.

At close to 3,000 kilometers (1,865 miles) thick, this is Earth’s thickest layer. It starts a mere 30 kilometers (18.6 miles) beneath the surface. Made mostly of iron, magnesium and silicon, it is dense, hot and semi-solid (think caramel candy). Like the layer below it, this one also circulates. It just does so far more slowly.

Near its upper edges, somewhere between about 100 and 200 kilometers (62 to 124 miles) underground, the mantle’s temperature reaches the melting point of rock. Indeed, it forms a layer of partially melted rock known as the asthenosphere (As-THEEN-oh-sfeer). Geologists believe this weak, hot, slippery part of the mantle is what Earth’s tectonic plates ride upon and slide across.

Diamonds are tiny pieces of the mantle we can actually touch. Most form at depths above 200 kilometers (124 miles). But rare “super-deep” diamonds may have formed as far down as 700 kilometers (435 miles) below the surface. These crystals are then brought to the surface in volcanic rock known as kimberlite.

The mantle’s outermost zone is relatively cool and rigid. It behaves more like the crust above it. Together, this uppermost part of the mantle layer and the crust are known as the lithosphere. Earth’s crust is like the shell of a hard-boiled egg. It is extremely thin, cold and brittle compared to what lies below it. The crust is made of relatively light elements, especially silica, aluminum and oxygen. It’s also highly variable in its thickness. Under the oceans (and Hawaiian Islands), it may be as little as 5 kilometers (3.1 miles) thick. Beneath the continents, the crust may be 30 to 70 kilometers (18.6 to 43.5 miles) thick.

Along with the upper zone of the mantle, the crust is broken into big pieces, like a gigantic jigsaw puzzle. These are known as tectonic plates. These move slowly — at just 3 to 5 centimeters (1.2 to 2 inches) per year. What drives the motion of tectonic plates is still not fully understood. It may be related to heat-driven convection currents in the mantle below. Some scientists think it’s caused by the tug from slabs of crust of different densities, something called “slab pull.” In time, these plates will converge, pull apart or slide past each other. Those actions cause most earthquakes and volcanoes. It’s a slow ride, but it makes for exciting times here on Earth’s surface.

The Latest Coronavirus Comes From Dogs

Mouse plague map: are the mice terrorising regional NSW about to invade Sydney?

Do goldfish really have a 3-second memory?

COVID-19 vaccine is now available in L.A. County without…