media_cameraThis Shark Bay mouse has been found to be the same species as the Gould’s mouse, which was thought to have been extinct in Australia for more than 160 years. Picture: Wayne Lawler, Australian Wildlife Conservancy

A native Australian mouse thought to have gone extinct more than 160 years ago is still living on an island off Western Australia.

Scientists have discovered the Gould’s mouse, that was wiped out in Vic­toria and NSW after European settlers arrived, is the same species as a native mouse that lives in a small island population in Shark Bay, WA.

Using museum specimens preserved for up to 174 years by Museums Victoria and the Natural History Museum in London, the scientists found the Gould’s mouse was visually and genetically indistinguishable* from the Shark Bay mouse.

“It’s very exciting, I think everybody likes the idea of removing a species from the ever-growing list of extinct species in Australia,” said the study’s lead author, Dr Emily Roycroft. 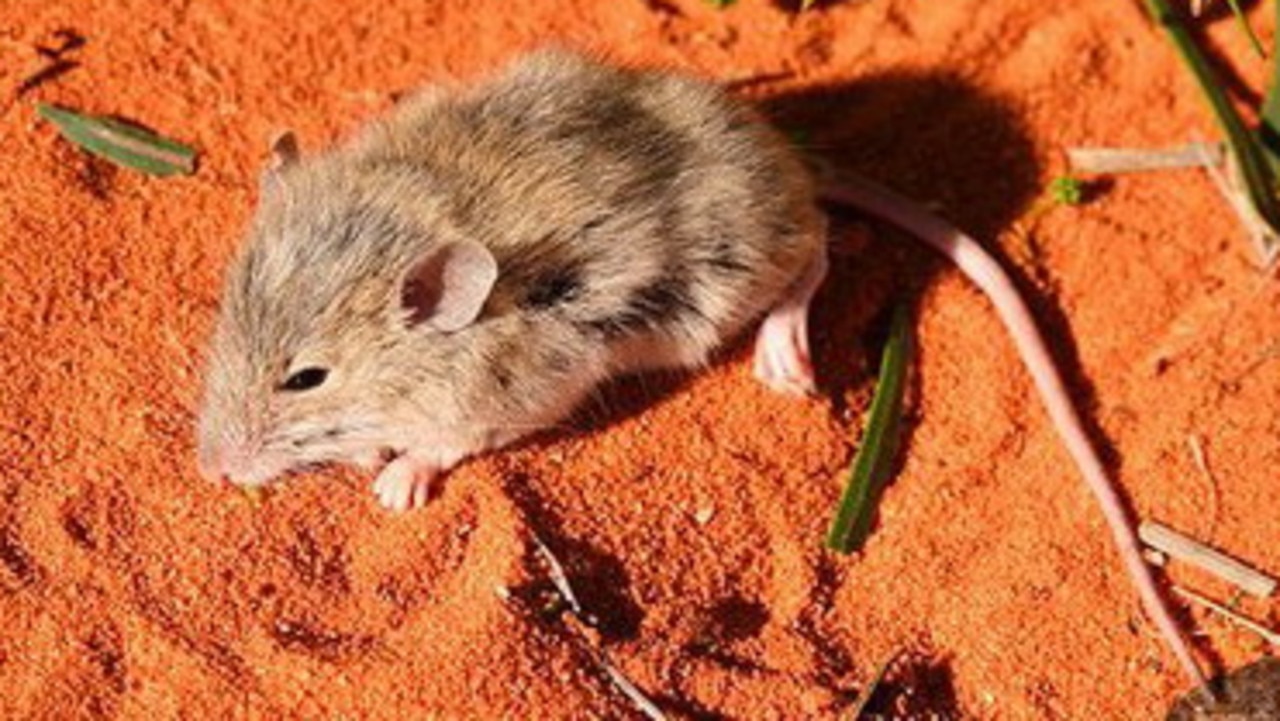 media_cameraThe Shark Bay mouse living in Western Australia has been found to be a genetic match to the extinct Gould’s mouse.

A total of 34 Australian mammal species have been declared extinct since Europeans arrived in Australia in 1788, with native rodents making up about 40 per cent of the lost species.

“We get to take a name off that list, which is great, but at the same time is quite sobering*,” Dr Roycroft said.

“It highlights a bigger issue … how quickly things can go catastrophically* wrong for native species.”

The study, published in the journal Proceedings of the National Academy of Sciences of the United States of America, intended to compare the genetics of eight extinct species of native Australian rodents to 42 of their living counterparts* to examine the decline of endemic* species since European arrival. Museums Victoria’s senior curator of mammals and one of the study’s authors, Dr Kevin Rowe, said the last documented sighting of a Gould’s Mouse was on William Blandowski’s* expedition to the Murray River, on the Victorian-New South Wales border, in 1857.

One other specimen was collected in NSW 20 years earlier by Charles Darwin’s* expedition to Australia in the 1830s.

“And then the species was never seen again,” Dr Rowe said.

“It was a really narrow window in which science had an opportunity to get a sample of a living specimen before it disappeared.

“For most of Australia when the extinctions happened in the early part of the 20th century or latter part of the 19th century, we have very few records – and those fortunately were preserved in museum collections.

“Now 160 years later we’re making use of those specimens to recognise that the living species in Shark Bay was actually a continental-wide mouse that once lived from Shark Bay all the way to NSW.” media_cameraOne of the Gould’s mouse specimens used to find the genetic link with the Shark Bay mouse living in Western Australia. Picture: C Ching, courtesy of the Trustees of the Natural History Museum, London

The surprise link between the extinct Gould’s mouse and the Shark Bay mouse was discovered by the Australian National University research team during genetic tests on these preserved specimens.

“Because they’re so geographically separate*, we initially expected that populations in Victoria and New South Wales would be quite genetically different from an island population off the coast of Western Australia,” Dr Roycroft said.

She said the Shark Bay mouse, also known as Djoongari, would keep its common name but its scientific name would be changed to that of the Gould’s mouse, Pseudomys gouldii.

indistinguishable: not able to see any differences sobering: creating a feeling of being more serious catastrophically: in a way that creates great damage or suffering counterparts: things that are the same but in another place or situation endemic: native and restricted to a certain place William Blandowski: a Polish born explorer who was best known for his 1857 scientific expedition to the Murray River Charles Darwin: an English naturalist who developed the theory of evolution by natural selection, which describes how species change over time by inheriting physical or behavioural traits that help them survive geographically separate: located a long distance apart

How long was Gould’s mouse thought to have been extinct? The island where the Shark Bay mouse lives is off the coast of which state? How many Australian mammal species have been declared extinct since Europeans arrive in 1788? What percentage of these extinct mammals are native rodents? The researchers used specimens from Museums Victoria and which other museum?

CLASSROOM ACTIVITIES
1. Native Species Extinction
A quote from the article is: “It highlights a bigger issue … how quickly things can go catastrophically wrong for native species.”

Now work with a partner to brainstorm a list of how and why things can go catastrophically wrong for our native species.

2. Extension
Why is it important that species are researched and compared and kept records of?

How do you think this species got all the way from Victoria and New South Wales to off the coast of Western Australia?

Think of a name that combines the two species’ names into one.

VCOP ACTIVITY
Opener Up-Level It
Make a list of all the openers in the article. Pick three that repeat and see if you can replace them with another word, or shuffle the order of the sentence to bring a new opener to the front.

Don’t forget to re-read the sentence to make sure it still makes sense, and that it actually sounds better.

No time or ‘enormously selfish’? People who haven’t gotten a COVID-19 shot may have many reasons

Books of Wonder to Close Second Location… For Now

California to truck young salmon to the Pacific because of…