Grumpy Dogs Outperform the Friendlies on Some Learning Tests 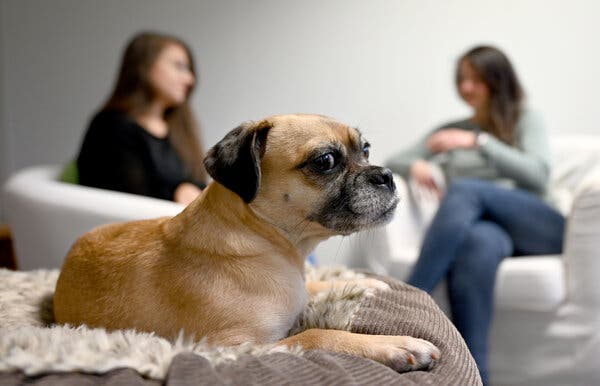 Researchers in Hungary defined a group of dog behaviors they were studying as “grumpy,” because “these dogs are not exactly aggressive but they have this grumpy attitude.” Carsten Rehder/picture alliance via Getty Images

Do you have a grumpy dog? It might have some hidden talents.

In a recent study in Hungary, researchers found that dogs with personality characteristics they had grouped under the “grumpy” heading were better able to learn from a stranger than more easygoing dogs.

This is admittedly a limited skill, but owners of grumpy dogs may be pleased with good news of any sort.

Consider some of the characteristics that the researchers put in the grumpy category: quick to bark, snarls or snaps when disturbed, doesn’t come when called, guards food to keep it from other dogs or people, active and restless. This is the dog that pet shelters say needs a very special owner. This is the dog that very special owners are forever having to explain to friends. That’s Fluffy’s chair, they say. That’s Fluffy’s rug. Actually, this is Fluffy’s house, all of it. Let’s go to a coffee shop.

Peter Pongracz, whose specialty at Eotvos Lorand University in Budapest is the study of dog-human interactions, reported the recent findings in the journal Animals, under a long title that begins “Grumpy dogs are smart learners.”

(A small warning to potential dog owners: The study does not say anything about which breeds are grumpier. The scientists looked at differences in individual dogs, all of them pets.)

Dr. Pongracz conducted the experiments because he had noticed in earlier research that dominant and submissive dogs in households that had more than one dog showed differences in learning styles.

In both studies, the dog’s task remained the same. Dr. Pongracz and his colleagues placed a favorite treat or toy in plain view behind a V-shaped wire fence. Instinctively, dogs would try to go straight toward the treat, which, sadly, doesn’t work. They had to begin by going farther away from the treat to get around the fence to get close to it. To the dog mind, this is a very strange idea. The wonderful-smelling treat is right there. Why would you go away from it?

“It’s quite a difficult task for a dog when they are on their own,” Dr. Pongracz said.

Dogs are social learners, meaning they can see what another (dog or person) does and then learn to do the same. In the earlier work, dogs that occupied a dominant position in a multi-dog home were hopeless at learning by watching other dogs while the more submissive dogs, perhaps practiced at keeping an eye on what other dogs were up to, did very well. But when a person demonstrated the solution, all the dogs performed the same.

Dr. Pongracz decided that in the recent experiment he would look at the relationship between dogs and owners. Owners filled out a questionnaire. And the dogs themselves did some tests as well. After conducting a statistical analysis of the results, from both the survey of owners and the dog tests, researchers concluded that a set of dog characteristics ranging from high levels of activity to snapping or snarling all belonged in the same category.

Labeling this particular group was difficult, Dr. Pongracz said, “because these dogs are not exactly aggressive but they have this grumpy attitude.”

For the recent experiment, dogs had to retrieve the object placed behind a V-shaped fence. The grumps and agreeable dogs performed the same when they had to figure out the problem by themselves, or if their owners showed them the way to get the treat.

But the grumpy dogs did noticeably better when a stranger demonstrated the way to get the object.

“They were more attentive,” Dr. Pongracz said. Why is a question that remains to be answered.

Monique Udell, director of the Human-Animal Interaction Laboratory at Oregon State University, who was not involved in the research, said it showed, as has a growing body of other work, “that individuality of dogs and lifetime experience influence performance and all sorts of tasks.”

But, she said, the characteristics grouped under the grumpy category seemed to go in two directions.

A dog trainer as well as a researcher, Dr. Udell said that trainers have long recognized that dogs that seem too energetic and even hyperactive as family pets may excel at tasks like herding, obedience or guard dog work.

“The unwillingness to come back when called” fits with that kind of dog, as does less inhibition, she said. The other characteristics listed in the study’s grumpy category related to aggression, like food guarding, didn’t match her experience.

So she wondered whether something other than grumpiness might be underlying all the behavioral tendencies tucked into that category.

Cynthia M. Otto, director of the Penn Vet Working Dog Center, at the University of Pennsylvania School of Veterinary Medicine, who wasn’t involved in the study, said the latest paper lacked detail about the dogs’ life history and nature of the training they had experienced. There are “so many variables that go into our relationships,” she said.

Granted, the variability of dog personalities and suitability to different tasks was undeniable, she noted.

At the Working Dog Center, “we allow dogs to choose their careers and it’s based on their personalities and on their interactions and on their relationships,” she said. She emphasized that breeds were not always a reliable guide to personality, because of individual differences.

Dr. Pongracz has four dogs, all from the same breed of the Hungarian herding dog, Mudi, and each has a distinct personality.

Large Dinosaurs Were Prone to Extinction Way Before The…

The dinosaurs were likely doomed before the asteroid struck