How Do You Solve an Extinction Mystery? Put a Tiny Computer on a Snail. 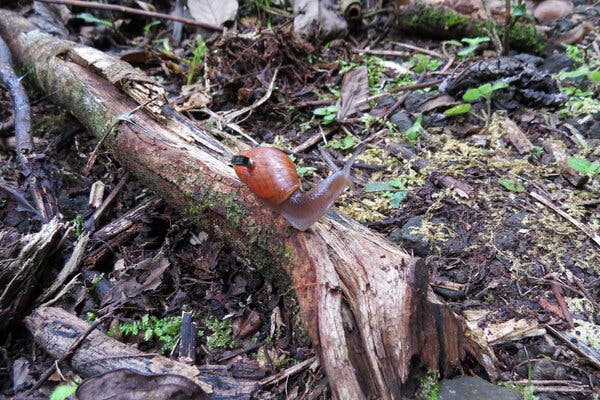 A rosy wolf snail, equipped with a tiny computer on its shell in the Fautana-Iti Valley site in Tahiti.Inhee Lee

In 2017, a rosy wolf snail crawled along a sunlit trail in Tahiti with an unexpected passenger: a bespoke computer the size of an aphid, screwed delicately on its shell like a top hat.

This particular species of snail is implicated in the extinctions of as many as 134 snail species worldwide. People introduced the carnivorous rosy wolf snail to Tahiti decades ago, and the predatory species left few survivors.

But one Tahitian species managed to survive in dozens of valleys on the island: the tiny yogurt-colored snail Partula hyalina. “There must be something special about them,” said Cindy Bick, a researcher at the University of Michigan.

Now, with solar data collected from some of the world’s tiniest computers attached to the shell of the rosy wolf and the leafy habitat of P. hyalina, Dr. Bick and her colleagues have illuminated how P. hyalina’s pale shell enabled the species to skirt extinction. Their results were published in June in Communications Biology.

In 2012, when Dr. Bick was still a graduate student, she began investigating the mystery of P. hyalina’s survival along with Diarmaid Ó Foighil, a professor of ecology and evolutionary biology and curator at the university’s Museum of Zoology. Together, they published a 2014 paper suggesting the species’ more bountiful clutch of offspring helped it survive better than other species. But even this was not enough to explain P. hyalina’s rare success. “It’s doing more than surviving,” Dr. Ó Foighil said.

Most land snails prefer the shade. The dark-shelled rosy wolf snail, like many species, would dry out like jerky if left in the sun. But Dr. Bick read while doing research in the field journals of an early 20th-century malacologist that P. hyalina were often found on forest edges, where trees thin out in sunlight.

Dr. Bick and Dr. Ó Foighil started thinking: If P. hyalina’s milky shell can reflect back and tolerate more sunlight, sunny forest fringes might offer a safe haven free from the rosy wolf. They just needed a way to measure how much sunlight each species received each day.

As the two zoologists were pondering snails, across campus, David Blaauw’s engineering lab had created the world’s smallest computer that has a battery: a 2-by-5-by-2 millimeter sensor slightly bigger than an aphid. The sensors receive data with visible light and transmit it through a radio.

Inhee Lee, an assistant professor at the University of Pittsburgh and alum of Michigan Engineering, attached a mini computer system to a leaf harboring a Partula hyalina snail.Cindy Bick

Several years later, Dr. Blaauw’s team received a request that stood out: to attach the tiny computers to carnivorous snails in Tahiti. Dr. Bick’s proposal seemed perfect — a chance to test the sensors in the real world with collaborators close by and assist in a project that could advance wildlife conservation.

To prep the sensors for the snails, Dr. Blaauw’s lab added a tiny energy harvester with solar cells so the sensor could recharge its battery in the sun. They cocooned the system in epoxy to waterproof the sensor, protect it from severe light and cushion it from the rough-and-tumble life of the average snail.

They had one problem. They needed to endow the tiny computers with the power to measure light but keep the system free of large batteries that would flatten a snail. Inhee Lee, now an assistant professor of electrical and computer engineering at the University of Pittsburgh who was then a researcher in Dr. Blaauw’s lab, helped solve the puzzle. Dr. Lee and Dr. Blaauw simply reused the harvester, and measured the speed of its solar charge as a proxy for sunlight.

Using some invasive snails found in a Michigan garden, the researchers first tried and failed to stick the computers to the shells with magnets and Velcro until they figured out how to glue a metal nut to the surface and screw the sensor into the nut. Then the snails and their tiny passengers were ready to weather the simulated elements (buckets of water).

In August 2017, Dr. Bick and Dr. Lee arrived in Tahiti with 55 sensors. They hopped from valley to valley guided by Trevor Coote, an author on the paper and a specialist on these land snails who was based in Tahiti. (Dr. Coote died of Covid-19 in February 2021.)

Each day, the researchers tracked the snails for hours to ensure they did not escape. Occasionally, they got rained on. They did not have a permit to attach computers to the P. hyalina, which is considered endangered, so they stuck cameras directly alongside the snails, on the leaves slept on during the day, essentially tracking how much sunlight the sessile snails received. But the computer-laden rosy wolf snails proved a trickier challenge, as the mollusks were slow-moving but determined to forage (one snail absconded with a sensor for a few days).

The data revealed the sensors on P. hyalina’s habitat received, on average, 10 times as much sunlight as the rosy wolf snails did. That confirmed the researchers’ hypothesis that the bright conditions protected the pale snails from the rosy predators.

The rosy wolf snail was introduced to the Society Islands in the 1970s with the goal of controlling another invader, the giant African land snail. But the rosy wolf’s reign of terror drove many species of tree snails in the islands to extinction.

“I grew up around these environments and listened to the myths and stories featuring animals and plants that have now either gone extinct or are on the way to extinction if we do not act fast to conserve them,” said Dr. Bick, who is Pacific Islander. She added that she hoped this research supported efforts to maintain P. hyalina’s solar refuge habitats in the Society Islands.

“Most of the time, we talk about things that are dead and dying,” Dr. Bick said. “This is a story of resiliency.”

Cindy Bick in the Tipaerui-lli Valley site in Tahiti.Trevor Coote

No time or ‘enormously selfish’? People who haven’t gotten a COVID-19 shot may have many reasons

How Many Tyrannosaurus Rexes Ever Lived on Earth? Here’s a…

Teachers taking ‘schools’ to students in…