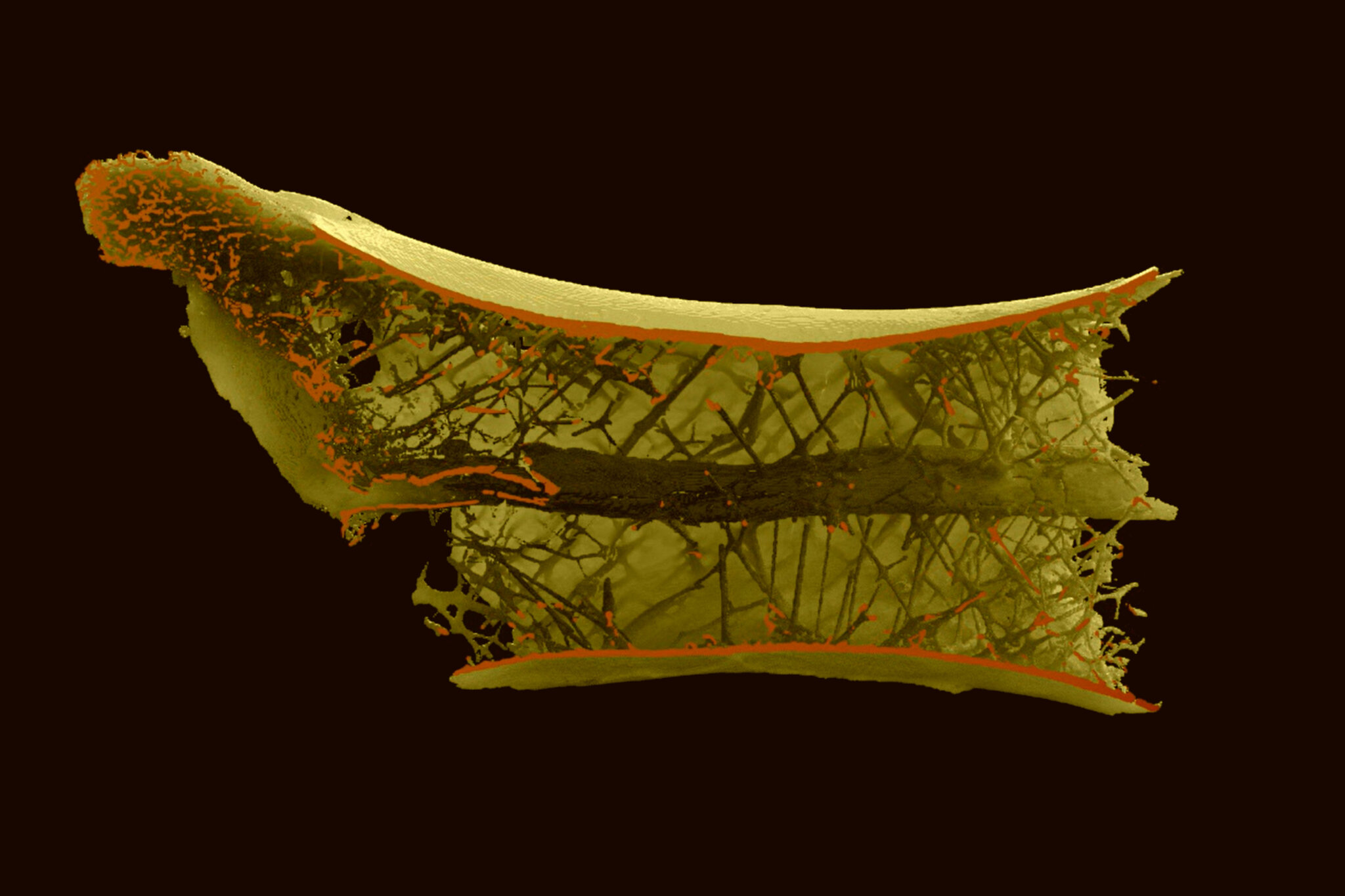 An end-to-end CT scan of a fossilized pterosaur vertebra reveals the spoke-like structures inside. Video by Williams et al.Credit

If you were to gaze skyward in the late Cretaceous, you might catch a glimpse of surreal flying giants with wingspans that rival small planes. This supersized group of pterosaurs, known as azhdarchids, included species that measured 33 feet between wingtips, which made them the largest animals that ever took to the air.

The extreme dimensions of azhdarchids raise tantalizing questions, such as how they carried large prey without breaking their long necks, or how animals the size of giraffes effortlessly soared above their dinosaur relatives on the ground.

Cariad Williams, a Ph.D. student at the University of Illinois at Urbana-Champaign, was hoping to shed some light on these questions with the help of an azhdarchid specimen from the Kem Kem fossil beds of Morocco. She used a CT scan to study fossils from the animal’s neck.

“We just couldn’t believe the structure that we found inside,” Ms. Williams said.

The results, published on Wednesday in the journal iScience, stunned Ms. Williams and her colleagues. The animal’s neck was revealed to be scaffolded by a unique and complex network of helical struts connecting a central neural tube to the vertebra wall like the spokes of a bicycle. It was a structure that has no parallel elsewhere in the animal kingdom.

This unprecedented peek into an azhdarchid neck helps to fill some of the persistent gaps in our knowledge of their anatomy and behavior. Pterosaurs, like birds, evolved extremely fragile and lightweight skeletons to optimize their flight abilities; these qualities also cause them to be underrepresented in the fossil record because their bones easily break apart. 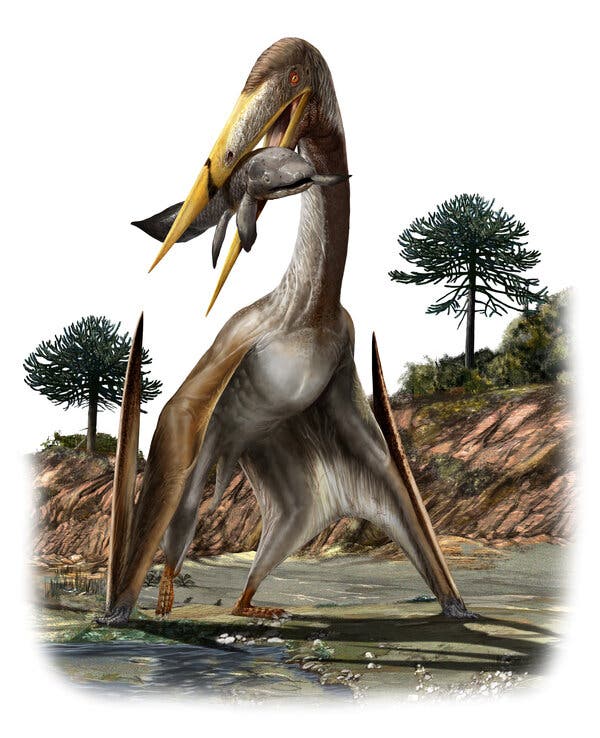 An artist’s rendering of a pterosaur, whose complex neck structure has no parallel elsewhere in the animal kingdom.Williams et al., iScience

The Kem Kem site is among the only place in the world where relatively intact azhdarchid fossils can be found. The Moroccan fossil beds preserve a lush river system that existed about 100 million years ago, attracting Cretaceous sharks, large predatory dinosaurs like Spinosaurus and Carcharodontosaurus, as well as azhdarchids.

Ms. Williams and her colleagues tentatively identified their specimen as an Alanqa pterosaur. While it’s difficult to estimate its exact dimensions, the azhdarchid probably had a five-foot-long neck and a wingspan that measured between 20 to 26 feet.

A biomechanical analysis of the intricate structure of the neck revealed that the spokelike filaments bolstered the vertebrae against the pressures of catching and carrying heavy prey. According to the team’s calculations, the addition of only 50 struts increased by 90 percent the weight that they could bear without buckling, enabling this particular specimen to carry loads of up to 24 pounds, which Ms. Williams called “really impressive.”

“They were using less energy to optimize their strength in their neck to be able to lift the prey,” she said.

The unusual adaptation may have functions beyond hunting and feeding, such as “neck ‘bashing,’ an intermale rivalry behavior seen in giraffes” or as a way to deal with the “shearing forces associated with large skulls being buffeted by strong winds during flight or while on the ground,” according to the study. Ms. Williams and her colleagues plan to follow up on their findings by scanning other azhdarchid vertebrae to assess whether the spoke structure is widespread.

David Hone, a paleontologist at Queen Mary, University of London, who was not involved in the study, said the new research provides a “nice confirmation” of the mechanical soundness of azhdarchid vertebrae.

“It’s a very neat finding that there is this weird arrangement of struts and that this is about the minimum possible to strengthen the bone,” he said. “But it’s also not much of a surprise as we know azhdarchids had incredibly reduced bones and were extraordinarily light for their size.”

“What we really need for azhdarchids is a well-preserved 3-D skeleton,” Dr. Hone concluded. “We are working from either flattened fossils or very incomplete specimens, which makes it hard to work out even a lot of basics.”

Scores of tule elk died at Point Reyes seashore in 2020. Are their days numbered?

How to boost muscle regeneration and rebuild tissue

To Kill a Swan? Dispute Over a Bird’s Fate Ends With a…