In Nature, a Biologist Finds an Unlikely Companion 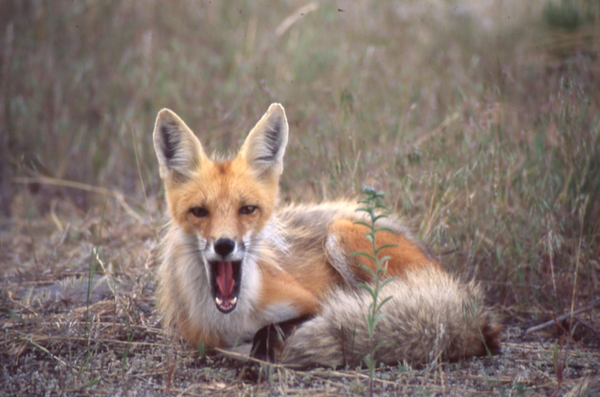 When you purchase an independently reviewed book through our site, we earn an affiliate commission.

FOX & I
AN UNCOMMON FRIENDSHIP
BY CATHERINE RAVEN

Every day at 4:15 p.m. the small red fox trots up to Catherine Raven’s cottage in a remote valley in Montana. And every day, she reads “The Little Prince” to him.

So begins “Fox & I,” the smart and tender memoir of an unexpected bond between a biologist and a fox. As a scientist, Raven knows she’s not supposed to assign human characteristics to wild animals. When her students in a field class in Yellowstone National Park notice the different way she speaks about Fox, Raven diagrams the kinship to reassure herself of its “logical and inevitable” path, and to prove to students that her relationship with Fox “had followed a natural course of events and that nothing happening between us was bending the immutable laws of science.” Yet “Fox & I” ultimately sidesteps this fear of being misunderstood, suggesting we belong among animals more deeply than we think.

Belonging does not come easily to Raven, who describes her parents as “violent,” wanting her “to disappear.” Having determined that “when your own parents don’t want you, no one else will,” Raven leaves home at 15, throwing herself into college and seasonal backcountry work for the National Park Service. Eventually, she earns a Ph.D. in biology from Montana State University, where she feels suffocated by Bozeman’s man-made environment. “It seemed like every living thing wore a leash or a collar or sat in a cage,” Raven writes. “I felt like I did too.”

After completing her studies, she delays accepting a job in academia to buy land in a glacier-carved Montana valley, 30 miles from the nearest grocery store. She camps among the boulders until her cottage is built.

Here she meets Fox, alongside junipers, magpies, mounds of thatch ants and a field of voles and thistle. At times Raven’s blow-by-blow descriptions of the ecosystem drag (“Keen observers appreciate boring rhythms,” she writes), and her narrations from Fox’s point of view often felt too cute for me. Still, the deftness of her observations erases any suggestion that her connection to Fox is invented or saccharine. It blooms, like any other friendship, from proximity, personality, attention and time.

There is also a backdrop of brutality. Raven tells of farmers bludgeoning foxes in their fields, and of the long horseback hunts in Britain that still end with dogs tearing foxes to pieces. In the early to mid-1900s, U.S. federal land managers left carcasses tainted with mange near den sites, or released infected “Judas animals” to spread the tortuous mites to wolves, coyotes and foxes.

Such policies are possible only because we view foxes as quintessentially different both from ourselves and from our pets. Raven wryly pushes back against the delusion that our “boxed animals” are so different from wild ones, and questions whether humans are as superior in intelligence as we think.

“If I’d kept Fox tethered like a horse, hawk or pet skunk, I would have been allowed to assign personality to him,” Raven observes. But, she later adds, “If I owned him, how could I have called him my friend?”

Allowing every animal on the page its full agency, “Fox & I” crisply upends the hierarchy that places humans at the top of a pyramid. For some readers, this reanimation of wild animals may be painful, a reminder that the ecological destruction we’re collectively perpetrating falls upon conscious, aware beings, who are now tasked with surviving transformed habitats and extreme conditions. Raven eventually turns her powers of observation on the human species itself, gently reminding us that our buzzing, starless, plastic lives are simply “not evolutionarily stable.”

By the end of “Fox & I,” I found myself deeply lonely for the kind of belonging Raven found on the land. How did we end up so distant from our animal friends?

Afraid of The Dark? Blame Your Brain, Not Monsters Under The…