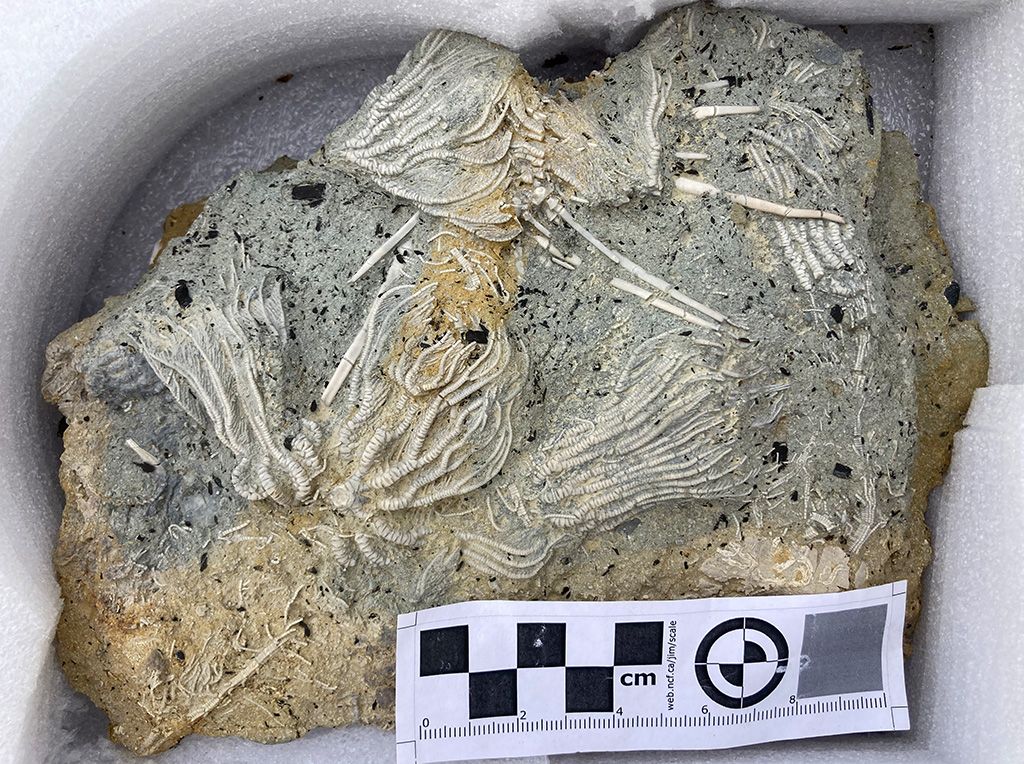 "If they could squeal, I'm sure they would have done."

Palaeontologist Tim Ewin is standing in a quarry, recalling the calamity that's written in the rocks under his mud-caked boots.

"They tried to protect themselves, adopting the stress position of pulling their arms in," he continues. "But it was all in vain; you can see where their arms got snagged open, right up to the crown. They were pushed into the sediment and buried alive."

There's a little smile creeping across Tim's face, and he's got reason to be happy.

The misfortune that struck this place 167 million years ago has delivered to him an extraordinary collection of fossil animals in what is unquestionably one of the most important Jurassic dig sites ever discovered in the UK.

We can't be precise about the location of the excavation for security reasons, but you'll recognise from the gorgeous, honey-coloured limestone that we're somewhere in Cotswold country.

Things have changed a bit since Jurassic times, though.

No quaint villages and dry-stone walls back then; these parts were covered by a shallow sea, maybe 20-40m deep. And it was a damn sight warmer than your traditional English summer. The movement of tectonic plates means Britain was roughly where North Africa is today.

So you can imagine the types of creatures that would have been living on this ancient, near-tropical seafloor. 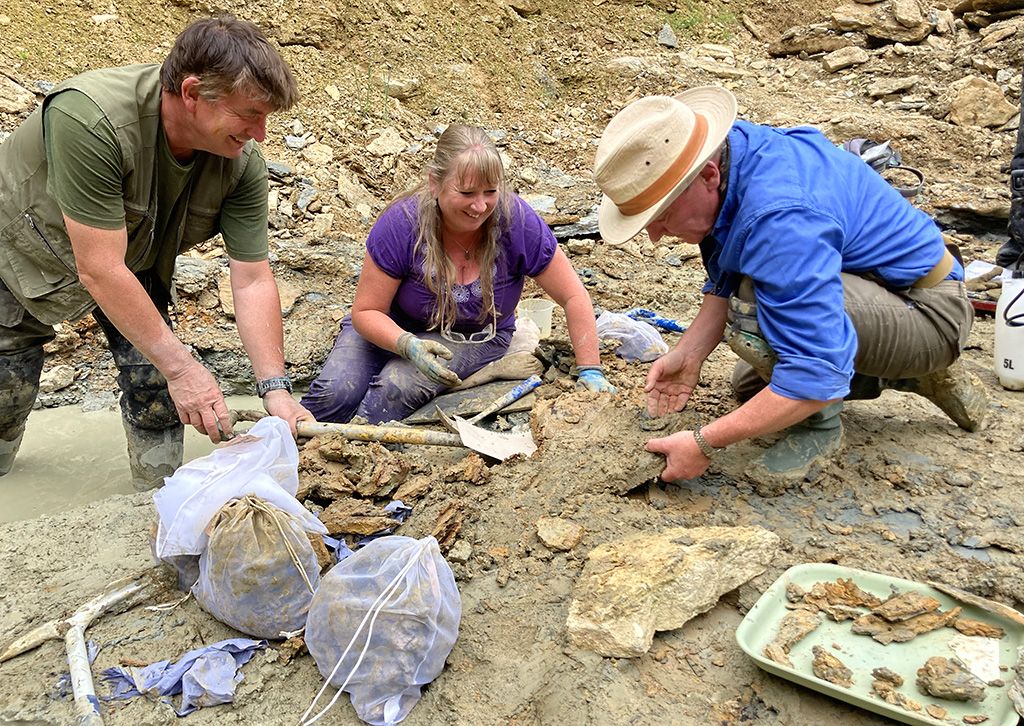 Stalked animals called sea lilies were tethered to the bed in great "meadows". Their free-floating cousins, the feather stars, were ambling by, looking to grab the same particles of food. And down in the sediment, starfish and brittle stars were feeling their way across the bottom with their fives arms, no doubt bumping into the occasional passing sea urchin or sea cucumber.

It's exactly this scene that's persevered in the rocks of our mystery quarry.

The quantities involved are astonishing. Not hundreds, not thousands, but perhaps tens of thousands of these animals that scientists collectively call "the echinoderms". It's a great name, derived from the Greek for "hedgehog", or "spiny", "skin". What is a sea urchin, if not an "underwater hedgehog"? 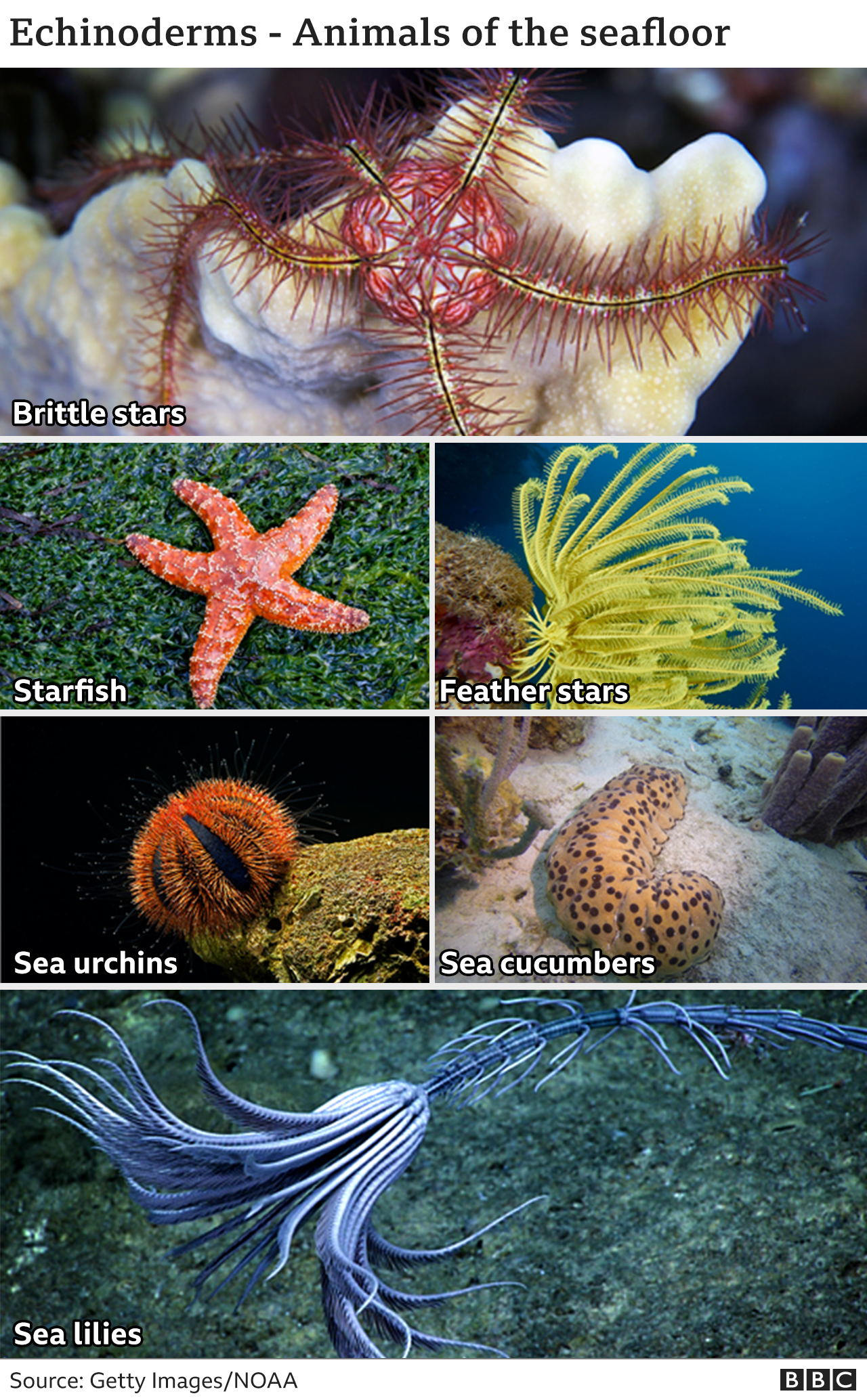 Most of what we know about the deep history of echinoderms from British fossils comes from the few specimens that emerged from railway cuttings and quarrying in the Victorian age. 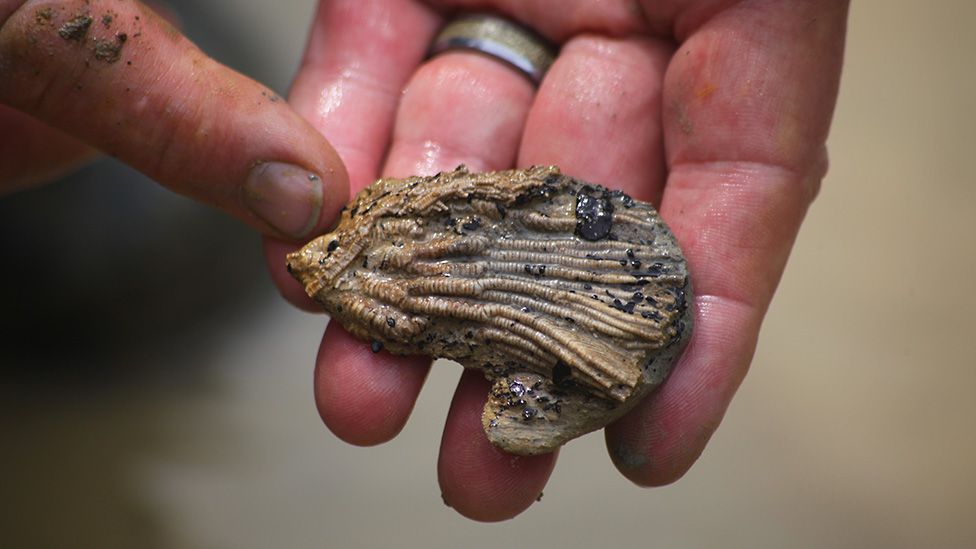 Tim Ewin's institution, the Natural History Museum in London, has these items tucked away in a small space that will now be utterly inadequate to accommodate the truckload of new examples that is coming.

"In this age of rock from the Middle Jurassic, only two species of starfish were known, represented by five specimens," he says. "In just a few days of collecting here, we've got 12 starfish specimens, and expect to find many more.

"And it's the same for the comatulids, or stemless crinoids (feather stars) – 200 years' worth of collecting is represented at the museum by about 25 specimens. Here, we've probably got 25 specimens just under our feet, and we've collected over 1,000." 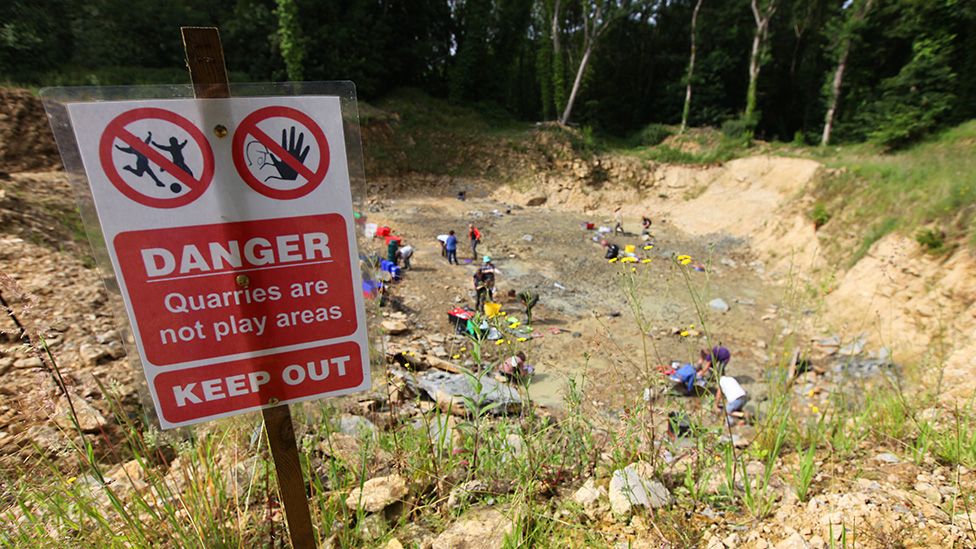 But it's also the quality of the preservation that's jaw-dropping.

Lean in close to a slab of rock that's just been cleaned up and you'll observe what, at first sight, reminds you of a plate of noodles. It is in fact a great mass of fossil arms from who knows how many sea lilies.

You can clearly discern the individual calcite plates, or ossicles, that made up the skeletal frames of these animals when they were alive. What's more, the specimens are fully articulated. That's to say, all parts are still intact. Everything is captured in three dimensions.

"We talk about the fives (radial symmetry) in echinoderms. They're all there; you can see them," says NHM senior fossil preparator Mark Graham. 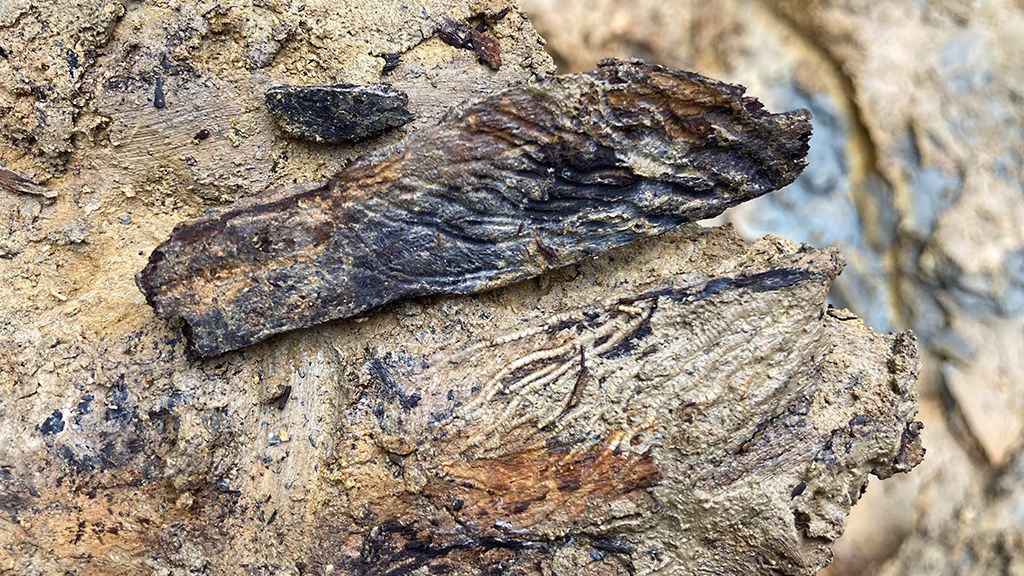 Specialists in fossil echinoderms believe the Cotswold quarry will help them better categorise the species' different life stages, their ecology and their proper position in evolutionary history.

To paraphrase that old cliche: the textbooks might not need to be rewritten but some extensive notes will almost certainly have to be added to the margins.

"We live in a changing world today, and if we want to understand how climate change might affect not only the future of humanity but of all life on Earth's surface, then the echinoderms are one of the best groups to study," he tells me.

"We know quite well what happened to them through a variety of mass extinctions, so their experience can be really helpful as we try to understand the major changes in biodiversity across geological time."

From Pangea to the present day

How Earth's continents have evolved 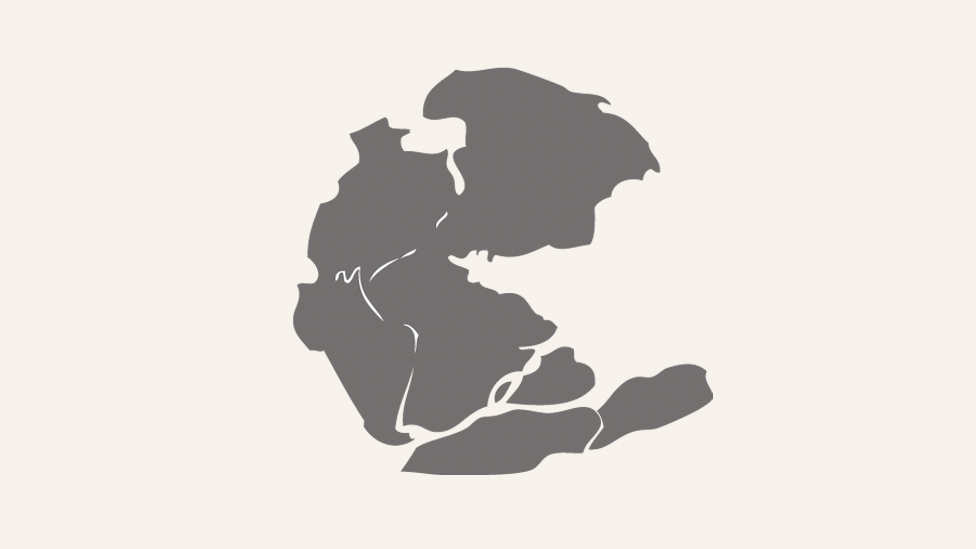 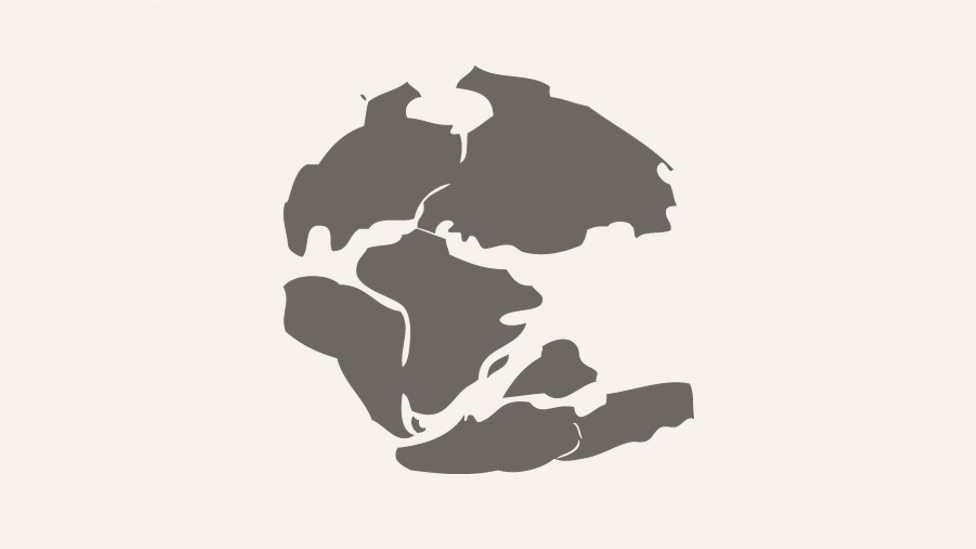 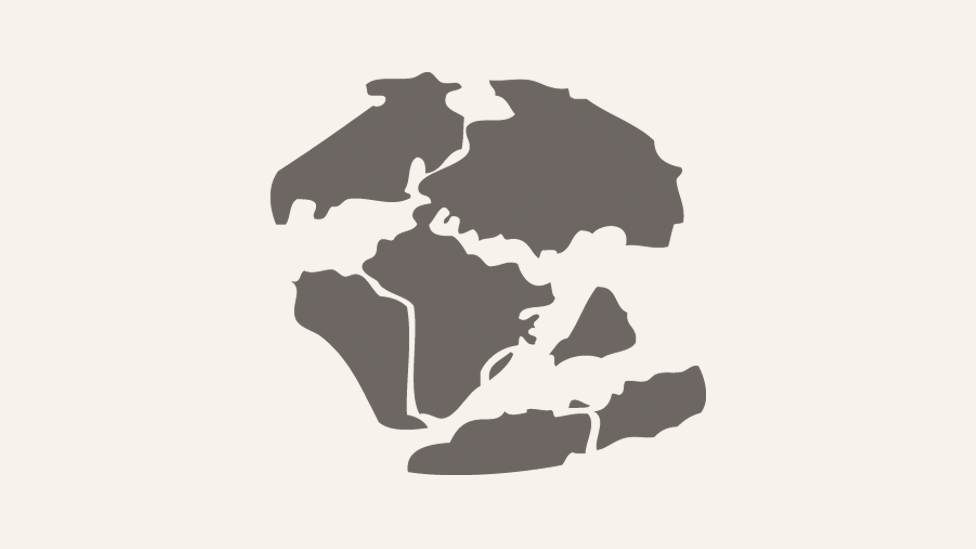 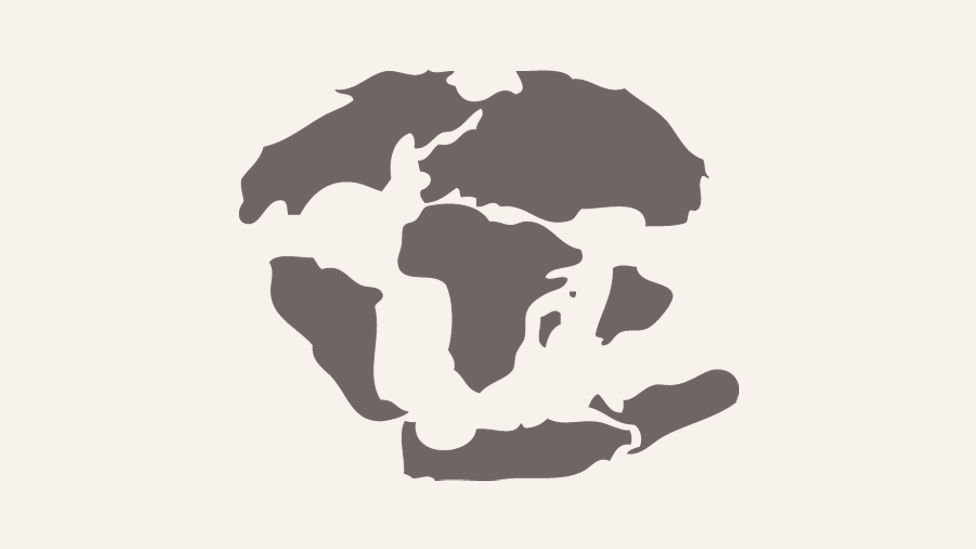 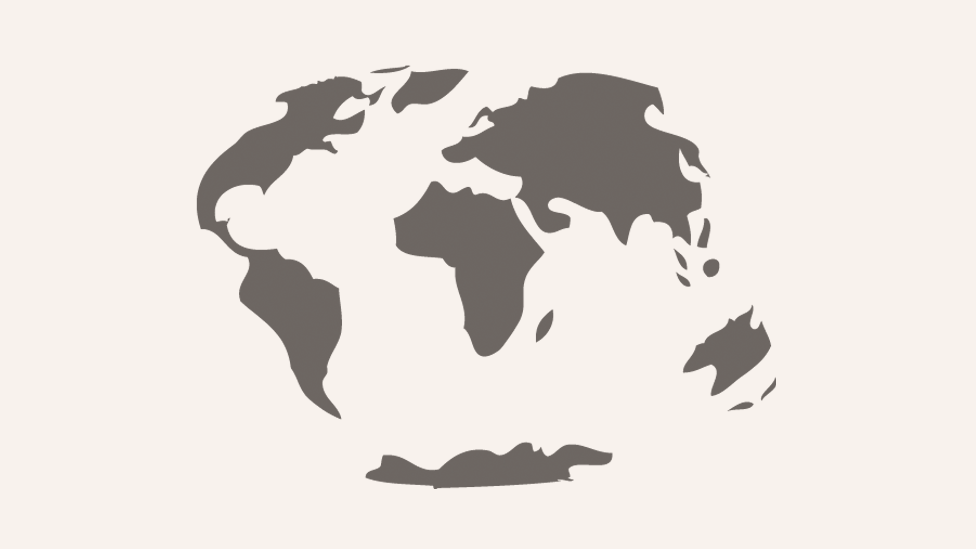 Sally Hollingworth is half-standing, half-sitting at the edge of a pool of muddy water. She's busy trying to ease yet more feather stars from the clay layers that intersperse the quarry's limestone units.

She's gently prodding with a spatula, attempting to get under the specimens to lift them without breaking them.

"I call them 'squiggly wigglies'," she laughs. "The stalked crinoids, I call those 'stalkie walkies'." 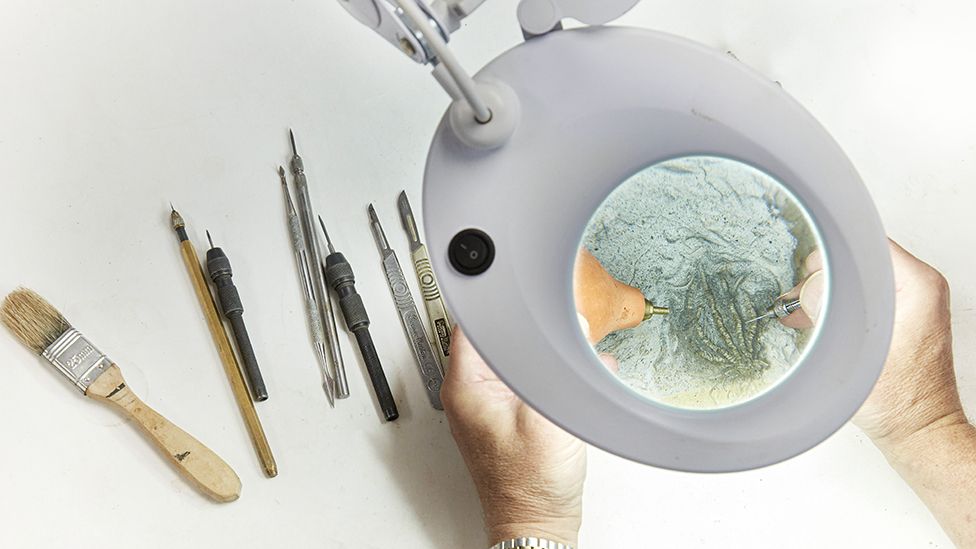 It's Sally and her husband, Neville, that the NHM have to thank for finding this marvellous site.

The pair are keen amateur palaeontologists. They spend their weekends investigating the Cotswold hills and their surrounds, looking for interesting rocks. The most promising items they take home to "his and hers" studios (a shed and a garage) where they use air abrasion tools to lift off any obscuring sediment.

It was while cooped up during lockdown that Sally and Neville first identified the potential of the quarry.

After examining the location on Google Earth and comparing it with geological maps of the area, they sought permission from the landowner for a recce, which Sally says seemed somewhat underwhelming at the time.

"We were finding only tiny fragments of Jurassic sea creatures and we said, 'well, OK, let's take a slab home and see what we can reveal if we can clean it up'," she recalls.

"I remember Nev shouting from the garage, 'Sal, Sal! You've got to come and have a look at this!' It was this beautiful sea lily emerging, coming to life, from the slab." 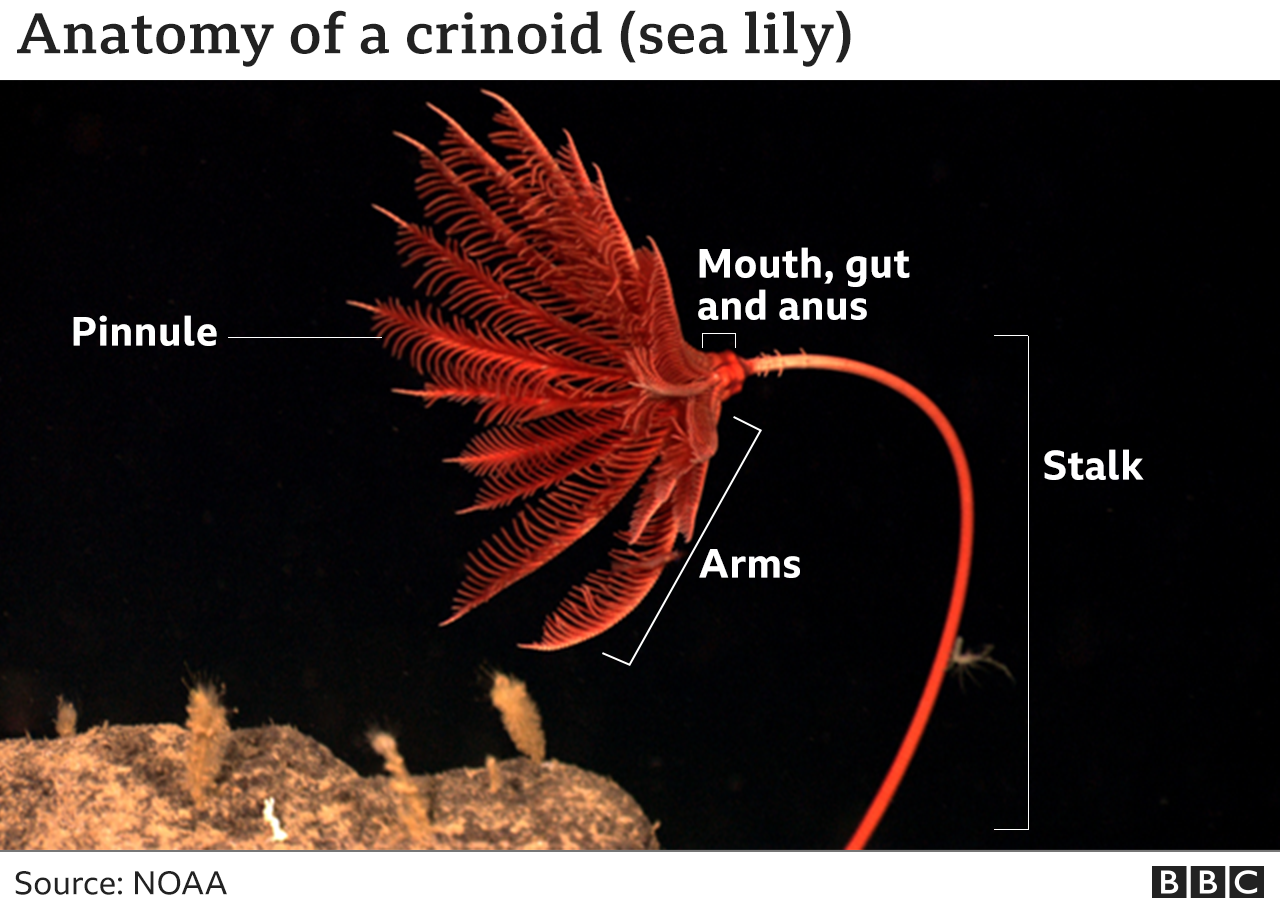 When Tim Ewin was notified, he immediately recognised the quarry's importance and arranged for an expert team to come in and conduct a systematic search.

Sally and Neville, far from being pushed aside by the professionals, are integral members of the group. Their local knowledge and homemade elderflower cordial are greatly appreciated.

Working the site is a mucky business. Recent rains have turned the floor of the quarry into a mud bath, and the precise and careful process of fossil excavation means the researchers have no choice but to get down on their hands and knees in the sticky mess.

"Some nice things are being protected by overturned food trays. It might not look like it in all this mud but there are actually some places where we're not supposed put our feet," says NHM curator Zoe Hughes. "But there's such an abundance, it's maybe not such a concern," quips colleague Katie Collins. "There's such a bonanza of stuff." 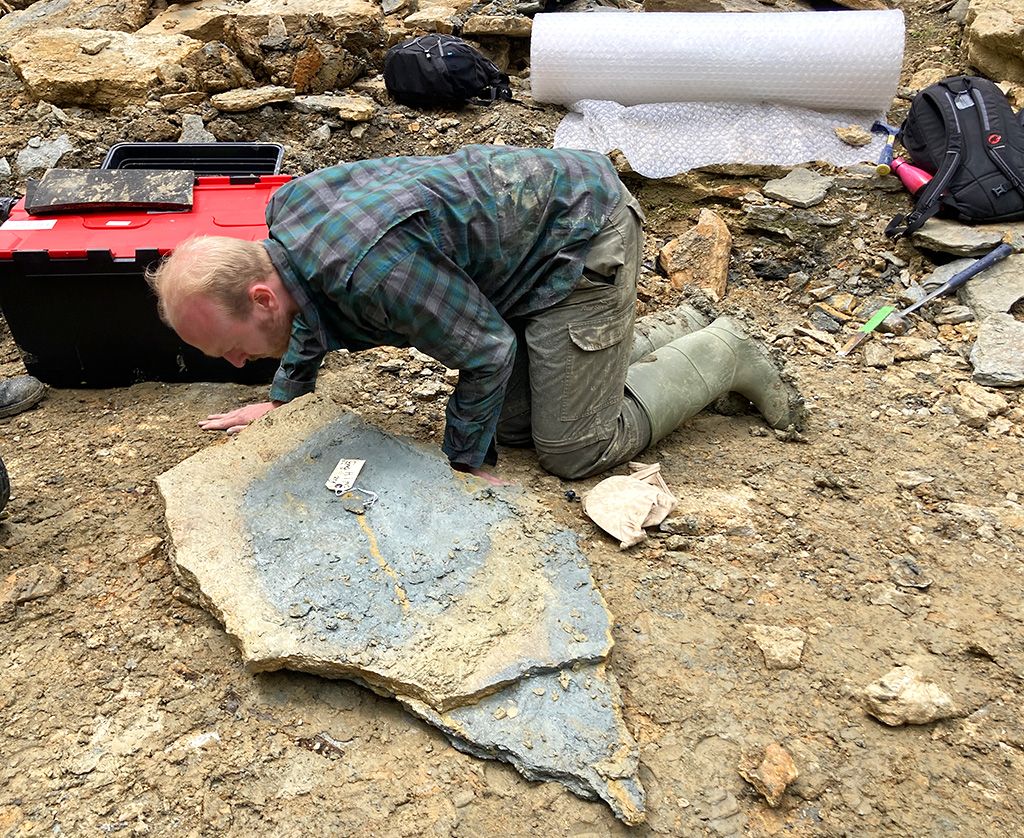 The focus is those clay layers. These hold the mass of echinoderms.

The context appears to be a busy swathe of sea-bottom where nutrients were constantly being delivered to the site.

You see this in the occasional chunk of Jurassic wood that pokes out from the goo. Maybe there was a delta not far away that was directing food-laden waters to this scene.

This can explain the abundance of fossil animals but it doesn't explain their supreme preservation. For that, we have to return to the idea of a calamity. The clue to the drama is recorded in the harder, more sand-rich bands of clay – a signal of a sudden shift towards a more energetic environment.

"What we have is something very suggestive of a dramatic mudflow," explains Zoe. "We have this happy little ecosystem and then, boom! – something catastrophic happens.

"Perhaps there was an earthquake that caused the mudslide and this came in and covered everything up. This is why the preservation is so amazing, because the scavengers couldn't then get to all those animals to pick them apart."

As Neville Hollingworth likes to put it: "What we've got here is a sort of Jurassic Pompeii." 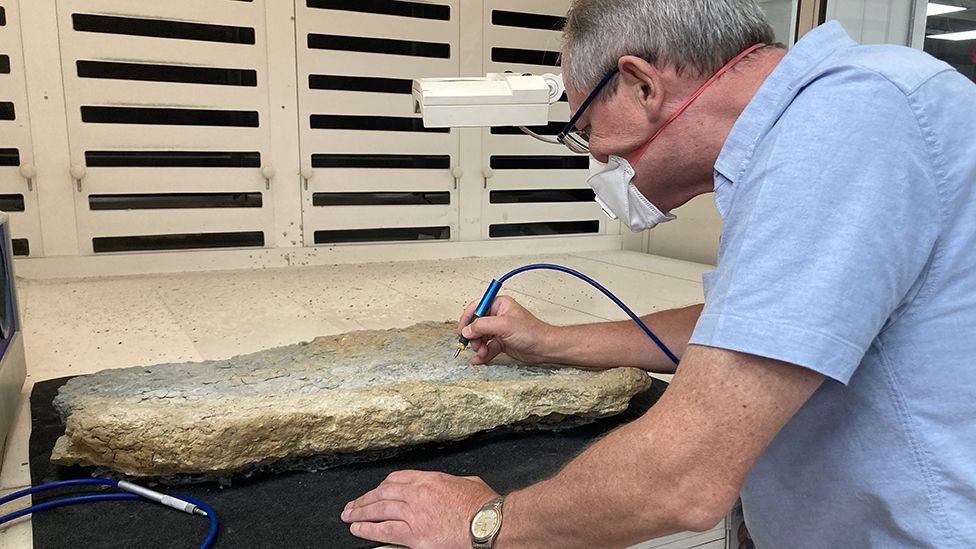 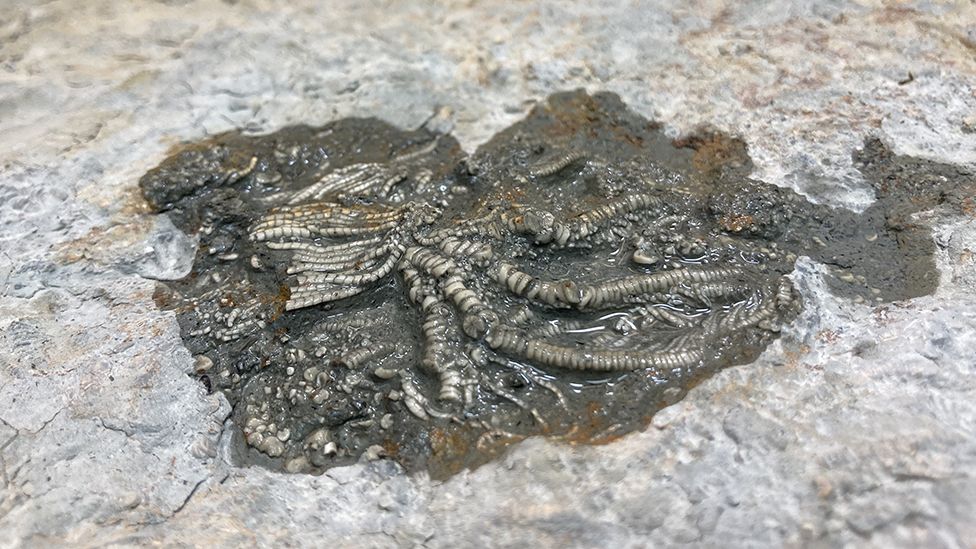 These worker ants drag their queens to far-off bachelor pads…