Even in the densest human habitations, there are orders of magnitude more ants than there are of us, doing the hard work of making our crumbs disappear.

It is telling, the entomologist Eleanor Spicer Rice writes in her introduction to a new book of ant photography by Eduard Florin Niga, that humans looking downward on each other from great heights like to describe the miniaturized people we see below us as looking “like ants.” By this we mean faceless, tiny, swarming: an indecipherable mass stripped of individuality or interest.

Intellectually, though, we can recognize that each scurrying dot is in fact a unique person with a complicated and interconnected life, even if distance appears to wipe away all that diversity and complexity. So then why, Dr. Rice asks, don’t we apply the same logic to the ants we’re comparing ourselves to?

We share our world with at least 15,000 unique species of ants — although this is surely an underestimate, as we have no way to count the number of species still unknown to science. It is hard to express how ubiquitous they are. If you were to put all the animal life in a Brazilian rainforest on a scale, more than one-quarter of the weight would come just from ants. Even the sidewalks of New York City — where pedestrians walk unknowingly above armies of pavement ants that undertake huge, deadly turf wars each spring, dismembering each other in epic battles for territory — are teeming. One study found an average of 2.3 ant species on a given city median, doing the invisible work of making fallen potato chips and hot dogs disappear by the pound. Even in our densest habitations, there are orders of magnitude more of them than there are of us. 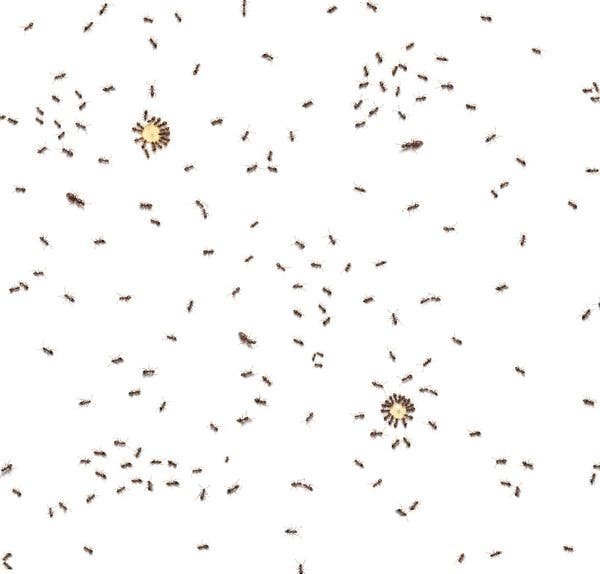 If distance has kept us from really seeing the ants with which we share our world, Mr. Niga’s photographs in “Ants: Workers of the World” are an antidote. With macrophotography that shows every hair (a surprising amount of it), every spiracle (the pores in their exoskeletons through which ants breathe) and every facet of their compound eyes, the images replace our accustomed looking-down-from-a-skyscraper view with intimate, face-to-face portraits. We are longtime neighbors, belatedly introduced.

At this level, ants have such a wide variety of shapes and styles and faces that they quickly begin to feel not just like individuals, but like people. It’s hard not to anthropomorphize them, as when we meet Messor barbarus, a grain-eating ant with flattened mandibles and a scrunched-looking exoskeleton that gives it a face like a very old, kind man. In other cases, further research teaches us not to trust our first impressions. Cephalotes atratus looks like a terrifying doppelgänger of the villain Sauron in his armor, but scientists believe that its intimidating spikes are meant for aerodynamic purposes: the better to glide about in a forest canopy. Polyergus is another cute ant, with a wide face, round eyes and drooping mandibles that look a bit like a smile, but in fact its jaws are so sharp that the species cannot effectively raise its own larvae. Instead, it raids another ant species’ colonies for workers that it enslaves to nursemaid its young.

All these differences help us see ants as they really are: rich in diversity, earned over millions of years of evolution as they adapted to a world’s worth of habitats, ecosystems and survival strategies. Dr. Rice calls ants “the Bauhaus creations of the natural world.” Like the architectural principle that form follows function, each strange-looking adaptation represents a major commitment in creatures with “little space for extravagance” and so illustrates yet another of the multitudinous ways that there are to be an ant. “To answer the question posed by an ant’s form,” Dr. Rice writes, “is to begin to untangle the intricate relationships that scaffold our world.”

The naturalist and author Edward O. Wilson discovered this early in his scientific career, when a mentor sent him a note about a group of ants with strange, long mandibles that could spring shut like traps. (“Wilson, find out what dacetines eat,” he wrote. “What do they hunt and catch creeping around with those weird mandibles?”) A question about morphology became a clue about a food web. The ants, it turned out, were eating springtails, a kind of hexapod that can fling itself rapidly through the air to avoid predators, but not quickly enough to outrun the incredible speed of the ants’ jaws. It was a race, Dr. Wilson wrote in “Tales From the Ant World”: “each using its own explosive devices, one to capture, the other to avoid capture.” Mr. Niga’s photographs show trap-jaw ants with mandibles like scimitars or lobster claws; some can close their jaws in barely one-tenth of a millisecond, slamming shut at speeds reaching 145 miles per hour.

We also meet Cataglyphis bicolor, with its long, spidery legs — an invaluable adaptation if you live, as this ant does, in the Sahara and need speed and height to keep you cool above the blazing sand. (For Oecophylla smaragdina, or weaver ants, long legs serve a different purpose: spanning gaps in the tree canopy as they construct nests of leaves and silk.) Leaf-cutter ants look fierce, their bodies covered in spines and spikes, but all that armor is meant not for fighting but, in effect, as a gardening tool. The ants are agriculturalists, ferrying food to the fungus that they cultivate in elaborate underground chambers, and the spikes allow them to better balance their leafy loads. In the tropics, they work in such diligent numbers that you can see the ant highways that their tiny ant feet wear into forest floors.

Learning the ways of ants teaches us that their lives are very different from our own. The ants we encounter in our own lives are almost exclusively female; the males are, in Dr. Wilson’s words, “little more than flying sperm missiles” that don’t live long and are often unrecognizable as ants at all. Queens are made, not born; fertilized eggs have the potential to be queens or workers, and will develop differently based on what the youngster is fed as she grows, a diet and a future that will be dictated by the needs of the colony. Ants also have an unusually high number of odor receptors, which allow them to decode chemical trails and messages. Some species also have three simple light-detecting eyes, called ocelli, to help them fly and navigate, in addition to the standard two compound eyes.

There are many reasons to understand ants better. Whole ecosystems are built around them, and large numbers of species, from plants to beetles to birds, are “ant obligates,” meaning that they depend entirely on their relationships with ant colonies to survive. Winnow ants disperse so many herbaceous seeds in North America, Dr. Rice notes, that “removing them causes wildflower abundance to drop by 50 percent.”

Dr. Wilson has studied the world’s ants for most of his nine decades, examining the mysteries of their lives with a level of detail that is almost surely unmatched by any other human in history. And yet when people talk about ants with this ambassador-slash-scout-slash-translator-of-alien-cultures, with his strange tales of creatures that have spent 150 million years building elaborate societies in nearly every habitable part of our world, he finds that they ask the same question over and over. “What,” they want to know, “do I do about the ones in my kitchen?”

He has a standard answer. Put out a bit of food, he tells people: A drop of honey, a bit of chopped nut. Then pay attention, when the ants come, as if you are on “an informal tour of a very foreign country.” Because you are. But you are also simply down at street level, finally meeting the neighbors.

Scientists may have finally found how catnip repels insects

Meet Bubbles: the stray who came to stay at the Newport…

‘Strange beast’ in amber is a very weird lizard

For The First Time, a Blood Test Can Tell if Cancer…