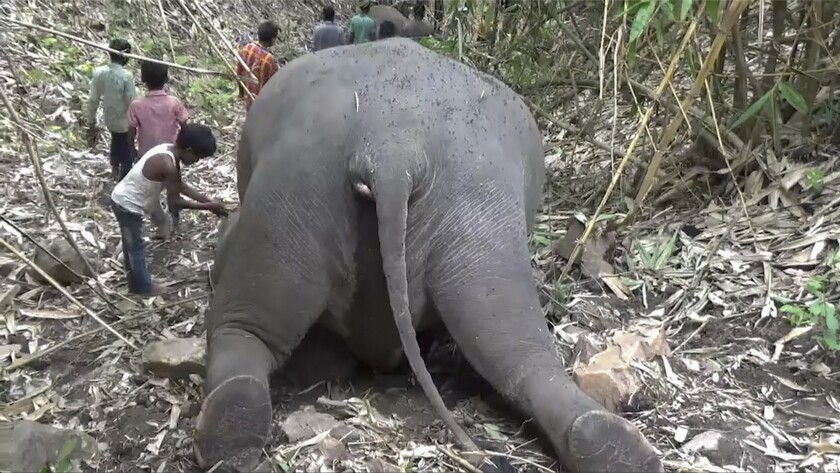 In an image from video, a young boy pays his respects to an Asiatic elephant that was found dead in a forest reserve in northeastern India.(KK Productions) Associated Press Share Close extra sharing options

Lightning is believed to have killed a herd of 18 wild Asiatic elephants in remote northeastern India, a forest official said Friday.

The elephants, including five calves, were found dead during rains in the protected Kondali forest reserve, wildlife official Jayanta Goswami said. The forest guard reached the remote area Thursday and found 14 elephants dead atop a hill and four at its bottom.

Preliminary reports by veterinarians said the elephants were struck by lightning, but Goswami said autopsies were being done.

The reserve is in Assam state’s Nagaon district, 95 miles east of Gauhati, the state capital.

Assam is home to an estimated 6,000 or more wild Asiatic elephants that constantly come out of the forests in search of food.

Conservationists have urged the government to prevent encroachment of people and to establish free corridors for the elephants to move between forests safely. In recent years, wild elephants have entered villages, destroyed crops and even killed people.

Breathing Through the Rectum Saves Oxygen-Starved Mice and Pigs

The new ‘Delta-plus’ coronavirus variant has been…