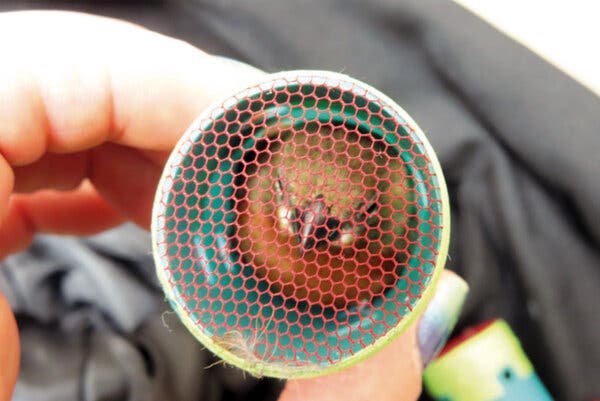 A finch hidden inside a hair curler as part of what the authorities said was an attempt to smuggle 35 songbirds into the United States.U.S. Attorney’s Office

The amenities were anything but first class for these star crooners: 35 songbirds were discovered hidden inside hair curlers in a man’s clothing when he arrived this week at Kennedy International Airport in New York, the authorities said.

The man, Kevin Andre McKenzie of Guyana, is now facing a federal smuggling charge, according to the U.S. Fish and Wildlife Service, which said that he admitted that he had been offered $3,000 to bring the birds into the country from South America.

The birds were identified as finches by customs agents, who the authorities said had selected Mr. McKenzie, 36, for screening when he arrived on Monday aboard a JetBlue flight from Georgetown, Guyana.

Known for their singing ability, finches have become a valuable commodity in places like Brooklyn and Queens, where the caged birds are pitted in competition against one another, often in parks. The ones that can sing fastest or longest typically win, reaping not only bragging rights for their owners but also gambling money — not to mention scrutiny from law enforcement officers that has led to a string of previous arrests. There is also a premium on vocal ability.

“In such contests, often conducted in public areas like parks, two finches sing and a judge selects the bird determined to have the best voice,” Kathryn McCabe, a special agent for the U.S. Fish and Wildlife Service, said in the criminal complaint against Mr. McKenzie.

Photos taken by customs agents showed the hair curlers lining the inside of a suit jacket worn by Mr. McKenzie and wrapped around his legs beneath his pants, according to the complaint.

“Although certain species of finch are available in the United States, species from Guyana are believed to sing better and are therefore more valuable,” Ms. McCabe said.

Mr. McKenzie was released on a $25,000 bond after making an initial appearance on Tuesday in U.S. District Court in Brooklyn.

Under federal law, a permit from the Fish and Wildlife Service is required to bring any wildlife into the country. Birds that are imported for commercial purposes must be quarantined for 30 days to prevent the spread of diseases like the bird flu and Newcastle disease, a contagious avian virus than can infect humans and domestic poultry, officials said.

Chestnut-bellied seed finches trapped in Guyana are highly sought crooners, with males sometimes selling for as much as $10,000, according to the Fish and Wildlife Service, which conducted a multiyear investigation, nicknamed Operation G-Bird, that focused on the illegal smuggling of the prized competitors.

Mr. McKenzie’s arrest was the third time that customs agents had intercepted smuggled finches at J.F.K. Airport in the past month.

Last month, U.S. Customs and Border Protection officers said that they found 29 finches that had been smuggled in hair curlers by a traveler at J.F.K., whom they fined $300 and sent back to Guyana. Last week, another man was caught smuggling 40 finches at the airport. He was also fined and returned to Guyana.

New recycling technologies could keep more plastic out of landfills

U.S. announces all 16-year-olds and over to get Covid…

Sharks use Earth’s magnetic fields to guide them like…

How tumor cells control their environment to survive