Meet Bubbles: the stray who came to stay at the Newport Beach Animal Shelter 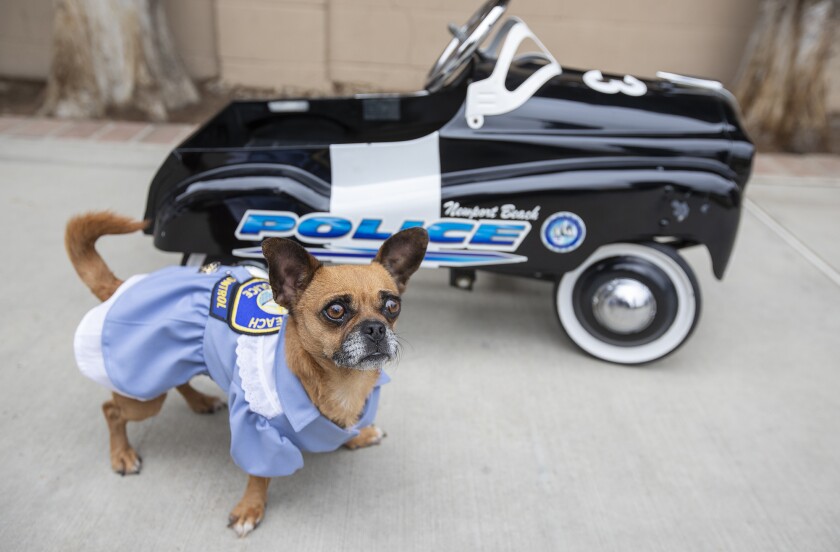 Bubbles, a Chihuahua-pug mix who has been tapped as the mascot of the Newport Beach Animal Shelter, has uniforms, a tiny badge and her own police cruiser. (Scott Smeltzer / Times Community News ) Daily Pilot Share Close extra sharing options

The Newport Beach Animal Shelter wasn’t exactly looking for a mascot in October 2019, when officers located a tiny stray female Chihuahua-pug mix hobbling around on nearby Mesa Drive. But that’s exactly what they got.

There was something not quite right about the little dog, whose front paws angled outward in a Charlie Chaplin-like stance, turning her walk into a crooked and prancing gait, but they took her in and named her Bubbles for her sprightly personality.

“She has no fine motor skills, so everything is more animated,” said Valerie Schomburg, an animal control officer who supervises the shelter for the Newport Beach Police Department. “She always looks like she’s super happy, just her gait is off a little.”

Bubbles suffers from a mild version of cerebellar hypoplasia, a disorder that hinders development of the brain stem and can cause problems with balance, posture and coordination. Shelter workers wonder if she may have been abandoned for that reason. 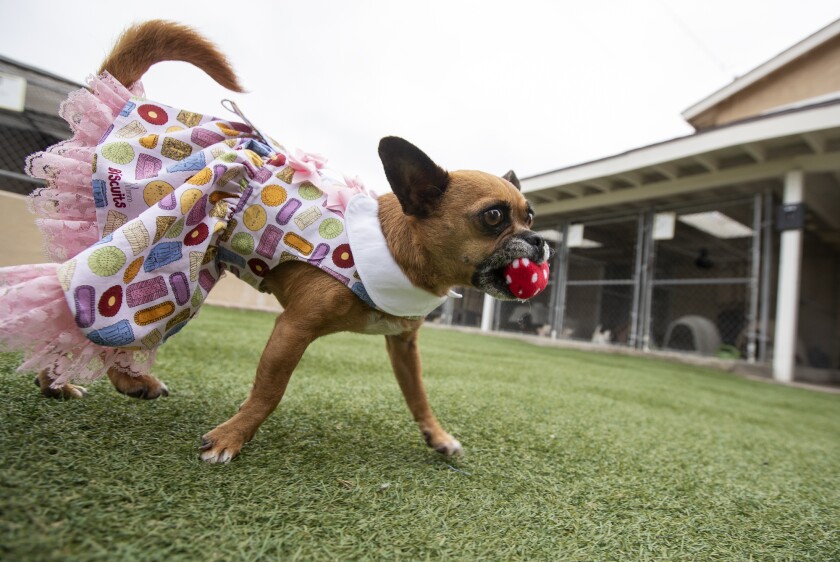 Bubbles plays with a cat toy at the Newport Beach Animal Shelter, where she has become an official mascot who educates the public on the ins and outs of the Newport Police Department.(Scott Smeltzer / Times Community News )

Coming in unfixed, with baby teeth that needed to be removed and a muzzle showing gray fur, staff place her age at about 3, but it’s a guess. Schomburg said early attempts to adopt Bubbles out netted some responses, but as time wore on, one thing became apparent: The shelter was fast becoming the loving home she needed.

“We realized how much fun we were having with her,” Schomburg said of the decision to keep the stray. “Then, we thought maybe we should use her for some common cause.”

Staff posted photos on Instagram in August, introducing the newest member of the family to the neighborhood. Soon, the photo sessions began to tell a story about Bubbles, the shelter and the wider Newport Beach community.

A social media timeline shows her applying to work for the city, interviewing with Newport Beach Police Department Chief Jon Lewis for an officer position and undergoing the necessary background checks, fingerprinting and physical agility test required to join the force. She passed with flying colors and was issued an official ID card and an itty-bitty badge made just for her at the March 6 swearing-in ceremony.

Followers may see a costumed “Cindy Lou Bubbles” helping spring the Grinch from jail or writing, and later mailing, a Valentine’s Day card to a special someone. In April, she teamed up with McGruff the Crime Dog to find the Easter Bunny, who’d gone missing before the big day.

“It’s about creating an awareness of what everyone in the Police Department does,” Schomburg said of what’s become a de facto campaign with fun tidbits mixed in.

Nowadays, Bubbles greets guests to the Riverside Drive facility and leverages her full 8 pounds of influence in occasional squabbles with one of the shelter’s 18 other residents over treats or trinkets. Fond of cats, especially kittens, she plays with cat toys and enjoys a good scratch on the rump.

Francesca Agrusa is a Newport Beach police community services officer who’s volunteered with the shelter since 2016. She described what a gift the new addition has been to officers in the department.

“Bubbles has this lightness of spirit that makes everybody smile,” Agrusa said. “Being in the line of duty can be hard, especially with COVID-19. Having a wonderful little soul just turns everything around.

“She’s just special — not because of her condition, but because she’s Bubbles,” she said.

Part of Bubbles’ appeal may be attributed to an impressive collection of dresses and uniforms crafted for every occasion. The teeny-weeny frocks have pumpkins, shamrocks or gingerbread men, and often have sleeves and collars.

The creations come from Costa Mesa’s Carol Leadbetter-Graham, who works creating seasonal displays for the Westminster Mall Target store and has been sewing for nearly six decades. The seamstress was put in touch with the Newport Beach Animal Shelter after Schomburg posted an open call for doggie designs. 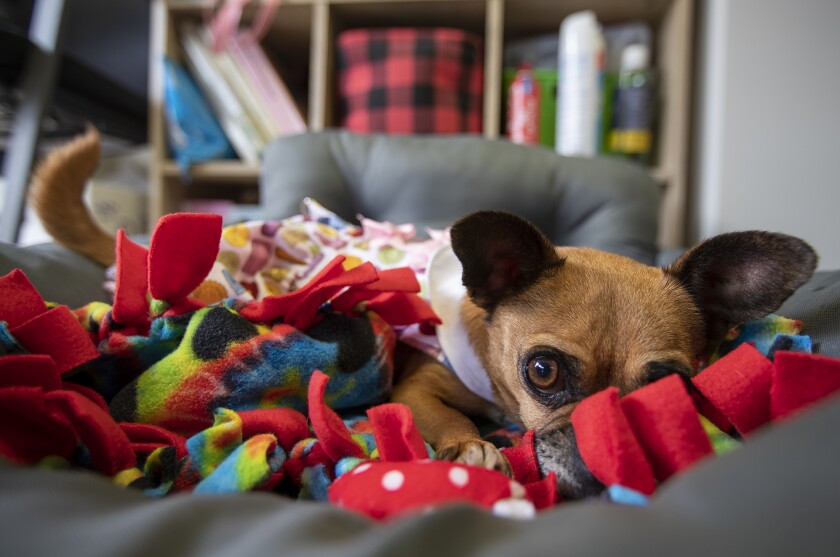 “Ever since then, we’ve become friends,” said Leadbetter-Graham, 67. “I think I’ve made over 50 dresses already, and I’ve got two on the go.”

She’s happy to do the work just to see the result on its intended model.

“She’s not available for adoption,” she said. “She’s part of us.” 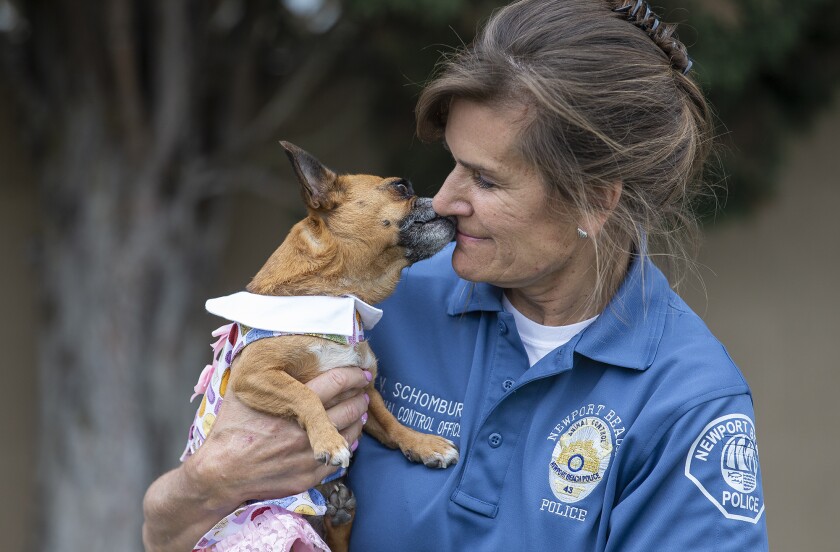 How Many Tyrannosaurus Rexes Ever Lived on Earth? Here’s a New Clue.

6 weird animals that evolution came up with