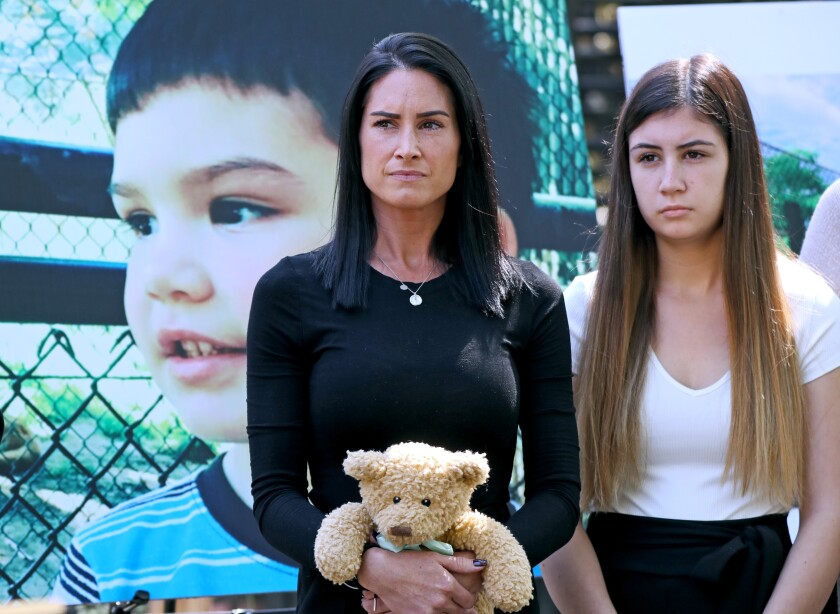 With a portrait of her late 6-year-old son, Aiden Leos, behind her, Joanna Cloonan appear with daughter Alexis Cloonan Monday to discuss the plans to dedicate a plaque to Aiden at the Orange County Zoo.(Raul Roa / Times Community News) Daily Pilot Share Close extra sharing options

A plaque and dedication to the memory of the 6-year-old boy killed in an apparent road rage incident will be installed at the Orange County Zoo inside Irvine Regional Park, officials said Monday.

Aiden Leos of Costa Mesa died on May 21 when a gunman opened fire into the back seat of his mother’s vehicle on the 55 Freeway in Orange.

The plaque is expected to be unveiled in conjunction with the opening of a new large mammal exhibit at the beginning of next year.

The partnership with O.C. Parks staff came together after photos surfaced of Aiden enjoying himself at the zoo. A photo of him in front of the mountain lion exhibit was included in a slide show at his memorial service.

“The idea behind what we’re doing here today is a plaque in memory of Aiden, who galvanized the community to find not just his killer, but now we take it bigger and try to find the perpetrators of many other violent crimes throughout Orange County,” county Supervisor Donald Wagner said. “Because what the community said upon learning the news of the shooting of Aiden was it’s not going to happen here. It’s not going to stand here. You’re not going to come to Orange County and do these crimes.

“Today, we want to celebrate Aiden’s memory, announce the coming facility with the plaque and dedication to Aiden, and say to any other victims of violent crimes in Orange County, this community has your back, and we are going to come for the people who committed the crime, we are going to hunt them down and bring them to justice.”

Marcus Anthony Eriz and Wynne Lee were arrested in Costa Mesa in connection with Aiden’s death. They are scheduled to be arraigned Friday.

Eriz was charged with murder and discharging a firearm at an occupied vehicle, while Wynne, who authorities said was the driver of the vehicle, has been charged with accessory after the fact and a misdemeanor for concealing a firearm in a vehicle.

Lacy, who spoke on behalf of the family, shared what made the zoo a special place to honor Aiden.

“We want to take this moment and allow it to be a joyous occasion, to honor Aiden’s spirit of kindness and graciousness,” she said. “I can’t think of a better place than here at Irvine Regional Park, where he enjoyed many visits with his family.”

The new large mammal exhibit, estimated to cost about $9.5 million, will encompass about two acres and feature four habitats. Rick De Jong, the project manager, said it is expected to be completed in the first quarter of 2022.

“It’s great,” Orange County Zoo Manager Donald Zeigler said of the decision to honor Aiden. “O.C. Zoo is a county facility, and we’re here to provide a service to the public, and children just like Aiden are here every day, and they love the service that we provide them, and the enjoyment and the education.

“It’s amazing that [Aiden] was here. That one picture that came up, even before they decided to do this, that was the picture they posted of Aiden, and it was at the zoo.”

Wagner said he has been inspired by the strength shown by Aiden’s family.

“It seems to me it’s a very symbiotic relationship because they’ve told me how much strength they’ve gotten from the community, and just the outpouring of not just financial support, obviously, but the emotional support even more importantly, and so they’ve taken great strength from the community, which they’ve shared with me,” Wagner said.

“In response, I would say I personally, and I think many in the community, have taken great comfort in their strength under these trying circumstances and their dedication to keeping the memory of Aiden alive.”

These Brittle Stars Have Thousands of ‘Pig Snouts’ on Each Arm

Readers reply: why do some birds’ heads not rock forwards…

Astronomers Detect a Lurking Cosmic Cloud, Bigger Than The…