‘We Got Him’: Missing Tiger Is Found in HoustonA Bengal tiger that was last seen wandering around a residential neighborhood last weekend has been found unharmed and will be taken to an animal sanctuary, the Houston police said.

“Commander, it’s been a long week looking for this guy.” “Yeah, it really has been. But we got him, and he’s healthy.” 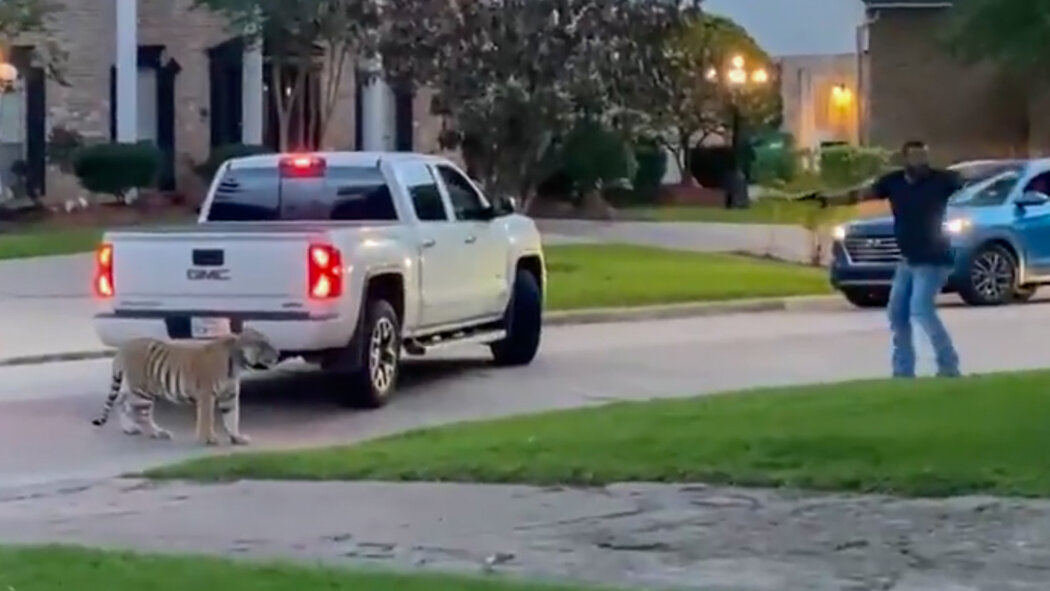 A Bengal tiger that was last seen wandering around a residential neighborhood last weekend has been found unharmed and will be taken to an animal sanctuary, the Houston police said.CreditRob Wormald, via Twitter

A tiger that was last seen wandering around a residential neighborhood in Houston last weekend has been found and “appears to be unharmed,” the Houston police said on Saturday.

The tiger, a 9-month-old Bengal named India, was taken to an animal shelter, and on Sunday it will be brought to the Cleveland Amory Black Beauty Ranch in Murchison, Texas, the police said.

“We got him, and he’s healthy,” Ronald Borza, a commander with the Houston Police Department, said in a video released by the department, which showed him petting the tiger as it drank from a bottle.

The tiger drew widespread attention after videos circulated online that showed it meandering through a West Houston neighborhood.

At a news conference on Saturday night, Commander Borza said the tiger had been found after an employee of the city’s animal shelter spoke to a friend of the tiger’s owner, who said the owner wanted to turn the tiger in.

Commander Borza said the owner was the wife of Victor Cuevas, 26, who had been the last person seen with the tiger.

She brought the tiger to the Houston police on Saturday, Commander Borza said.

He said the tiger would be able to roam freely at the ranch in Murchison, “where, hopefully, he’ll live the rest of his life in a very safe environment.”

“You should not have that in your home,” he said. “It’s not good for the tiger.”

Commander Borza said Mr. Cuevas’s wife was not facing charges, but that an investigation was continuing. He said the tiger had been “passed around a little bit” but that she had known all along where the tiger was.

Commander Borza thanked several officers who had helped search for the animal.

“I think the public thought it’d be easy to catch a tiger,” he said, “but it wasn’t at all.”

On Friday, Commander Borza had said at a news conference that he believed the tiger had been passed around six to eight times in recent days among the homes of people involved in handling exotic animals.

Commander Borza said the police had visited known owners of exotic animals in the Houston area in hopes of finding it.

In the videos that circulated online, an off-duty sheriff’s deputy who lives in the neighborhood draws his handgun when he sees the tiger. Later, Mr. Cuevas comes out to corral the tiger. A video shows him kissing the animal as he leads it away.

Mr. Cuevas was arrested on Monday and charged with evading arrest, a felony, after he was seen putting the tiger in a white S.U.V. and driving off from the scene, according to the Houston police.

On Wednesday, Mr. Cuevas was released from the Fort Bend County Jail, where he had been held on a $50,000 bond, according to Wesley Wittig, executive assistant district attorney in Fort Bend County.

But two days later, a judge revoked the bond, turned Mr. Cuevas over to the custody of the Fort Bend County Sheriff’s Office and set a new bond at $300,000.

Mr. Cuevas had previously been charged with murder in the shooting of a man in 2017, but he had been released on bond by the time the tiger incident occurred.

A city ordinance bars Houston residents from owning tigers, and a violation is a misdemeanor. Outside Houston but within the rest of Harris County, owning wild animals, such as tigers, is permitted under certain conditions.

The missing tiger had prompted concern among homeowners as well as animal rights activists, including Carole Baskin, who was featured in the 2020 Netflix documentary series “Tiger King.”

Ms. Baskin said in a Facebook post that she would offer a $5,000 reward to whoever could safely hand over the tiger to an animal sanctuary accredited by the Global Federation of Sanctuaries, a nonprofit that cares for animals that are abandoned, displaced or hurt.

Country diary: why do birdwatchers prize the ring ouzel so much?

Back to the office? The complaints and lawsuits are already…

How humans develop larger brains than other apes

Europe plans sat-nav and telecoms network at the Moon