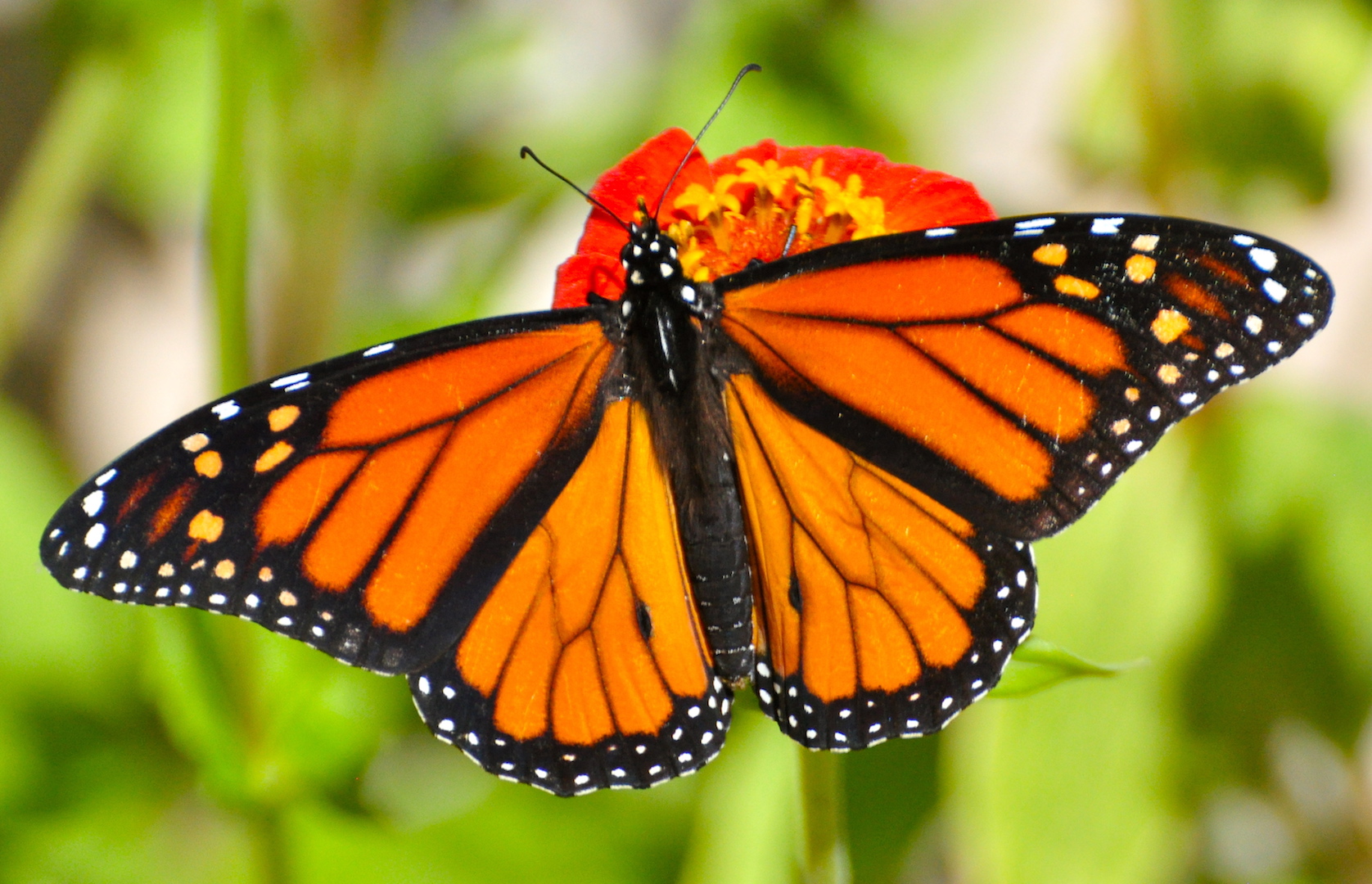 JUMP TO: Life cycle Are they poisonous? Where do they migrate? How do they navigate? Are monarch butterflies endangered? Additional resources

With their bright orange hues and lengthy migration, monarch butterflies (Danaus plexippus) are one of the world’s most iconic insects. But their population has steadily dropped in recent decades as they face habitat loss and other threats.

They can mate several times, sometimes for 16 hours at a time, after which the female immediately starts laying eggs on milkweed plants, according to Monarch Joint Venture (MJV), a non-profit partnership of organizations that facilitate monarch conservation. Monarch eggs are about the size of a pinhead and are football shaped, with vertical ridges, said Laura Lukens, the national monitoring coordinator for. The eggs are off-white to yellow in color.

Female monarch butterflies typically lay 300 to 500 eggs on different species of milkweed plants (Asclepias sp.), but they’ve been known to lay more than 1,100 eggs in captivity, according to MJV. However, only about 10% of those eggs survive to the larva stage due to heavy predation by spiders and stink bugs, Lukens said. It takes the eggs about three to five days to hatch.

From the egg emerges a small, striped caterpillar, or butterfly larva. Larva is the term for an insect’s growth stage. As the little monarch caterpillars grow, they become too big for their semi-rigid exoskeleton and must molt and replace this outer layer five times, according to MJV. The period between each molt is called an instar.

This growth period doesn’t last long — the first four instars last between one and three days each, and the fifth instar lasts between three and five days. Between the first and fifth instar, monarchs can grow from a little over 0.08 inch (2 millimeters) long to 1.75 inches (45 mm) long.

At the end of the larva stage, the caterpillar finds a safe place to hang from so it can transition into a butterfly. Once attached, the caterpillar sheds its skin one last time to reveal a jade-green sheath, or chrysalis.

Although a chrysalis is like a cocoon in that it serves to protect the developing insect, they are not the same. Cocoons are silk coverings made exclusively by moths, while chrysalises are hard exoskeletons that aren’t made of silk.

Monarch butterflies have orange wings criss-crossed by a lattice of black veins. Females are darker in color and have thicker veins, while males have two black spots on the veins in their hindwings, according to MJV. The border of the wings is black with white, brown and yellow spots in both males and females. A monarch’s wingspan is 3 to 4 inches (7 to 10 centimeters), according to the National Wildlife Federation.

Adult monarchs are poisonous to most of their potential predators. This is because during the larval stage, monarchs feed exclusively on milkweed sap, which contains toxic steroids called cardenolides, according to MJV. Monarchs have evolved to tolerate the toxic sap, at least to an extent; a larva that eats too much of the plant’s latex might experience temporary paralysis or seizures.

Cardenolides, also known as cardiac glycosides, are similar to digitalis, a plant compound used in medicine to help with heart conditions, according to JourneyNorth, a citizen-science program operated by the University of Wisconsin-Madison Arboretum.

Adult monarchs retain the toxins they ate as larvae, making them poisonous to predators such as birds, frogs and lizards, according to a 2018 review published in the journal Current Biology. The monarchs’ bright colors and bold markings serve as a warning signal of their toxicity to other creatures. Although most birds learn to associate a toxic insect’s bright colors with bitterness and vomiting, some species of birds in Mexico, such as the black-headed grosbeak (Pheucticus melanocephalus), have evolved to enjoy the flavor of monarchs and have no qualms with eating the bitter butterflies, as reported in a 1981 study published in the journal Nature. 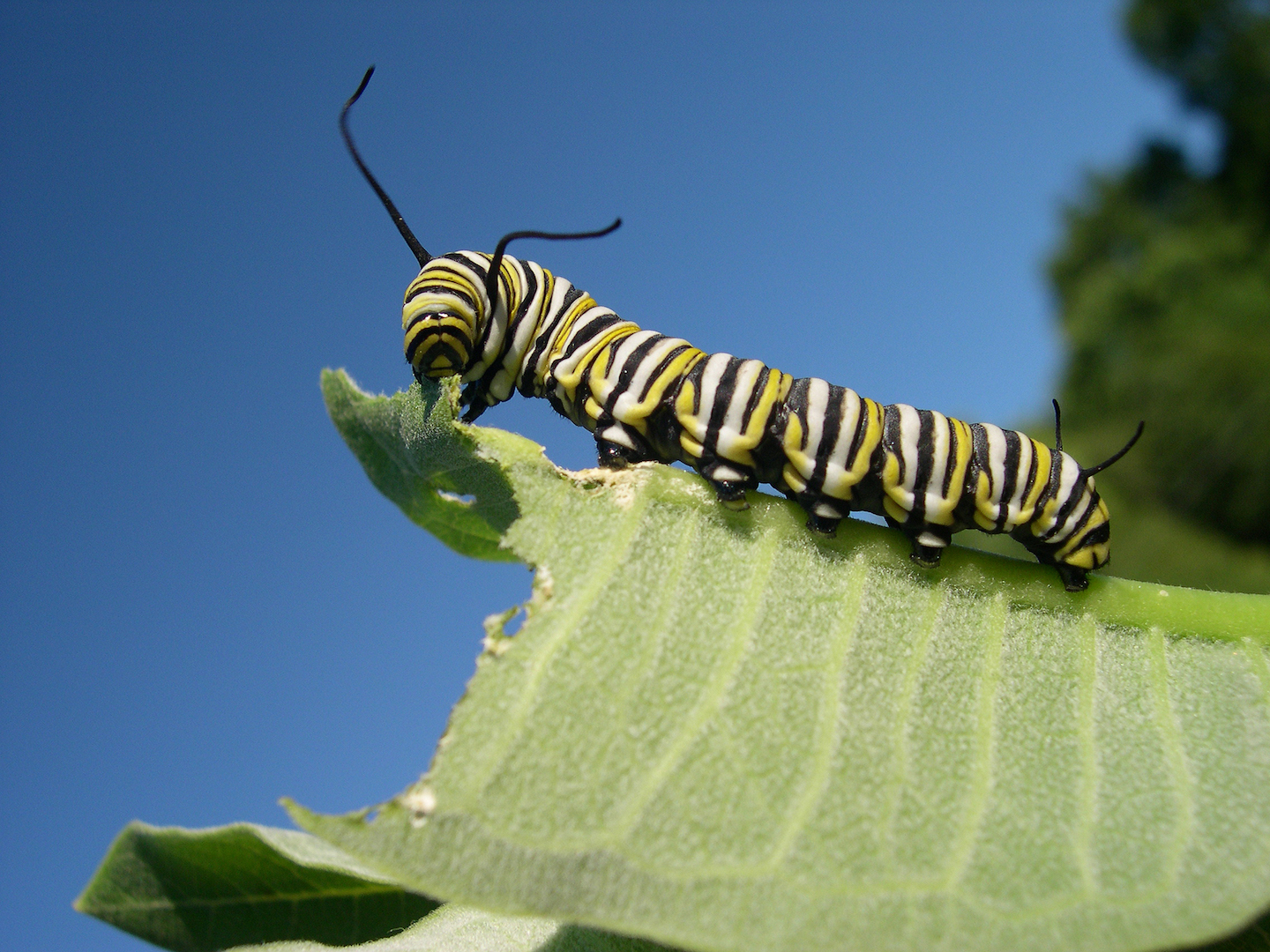 Where do they live and why do they migrate?

D. plexippus lives in North and South America, including the famous population that migrates between Mexico and Canada. This species can also be found in parts of Australia and other countries in Oceania, plus Indonesia, Portugal, Spain and the state of Hawaii. Biologists think that the butterflies that initiated these far-flung populations either hitched rides on ships coming from North America, or made the flight themselves, according to a 2014 study in the journal Nature.

D. erippus lives only in South America, and its population does not overlap with D. plexippus. Both species have migratory and non-migratory populations, according to MJV.

Though there are some migratory monarchs in Australia, the two North American populations of D. plexippus monarchs might be the most famous. “I think people are so in awe of them because they have this amazing migration,” Lukens said.

One of the migratory North American populations lives west of the Rocky Mountains, while the other lives east of them, Lukens said. The two populations aren’t genetically different, but they have different migration patterns.

The eastern population of monarch butterflies spend the fall and winter roosting in a small area of the mountains in Michoacán, Mexico, according to MJV. The butterflies cluster in fir trees when the temperatures range from 32 to 59 degrees Fahrenheit (0 to 15 degrees Celsius). During this period, the monarchs are in a state of diapause, which is similar to a hibernation. They don’t eat; instead they survive by using fat stores they accumulated on their migration south, according to a 2006 study in Integrative and Comparative Biology. They also shiver to keep warm. 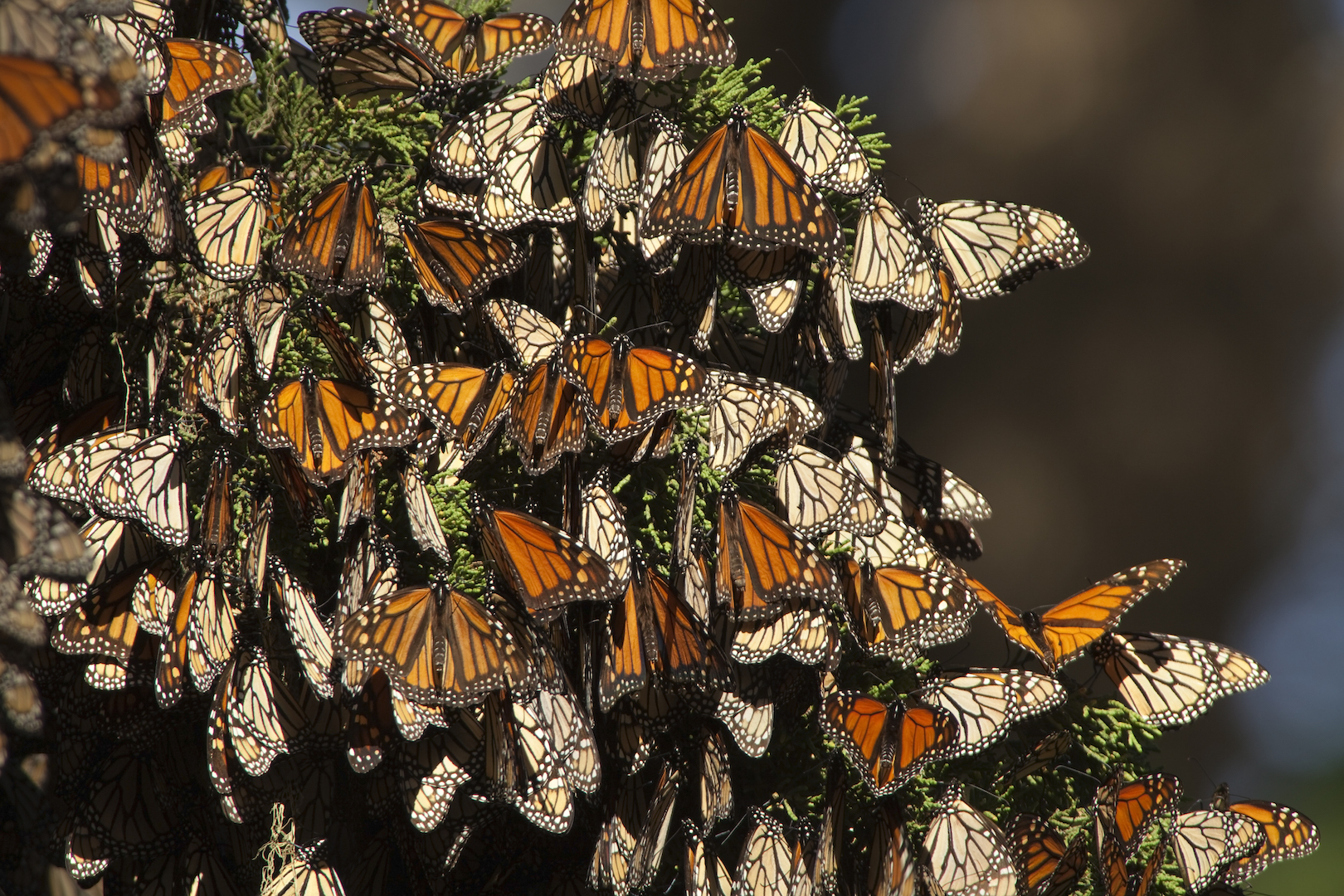 In March, longer days and warmer temperatures are likely what cue the monarchs to end their diapause, begin reproducing, and migrate north, according to the University of Michigan. The butterflies will begin making their way into northern Mexico and the southern U.S., according to MJV.

By the time the wintering adults die, they may have lived for nine months. Successive generations of spring and summer monarchs live for two to six weeks, according to MJV. As new generations are born, they continue migrating north, as far as southern Canada. As they move north, they search for grassland or agricultural habitat where milkweed and other flowering plants grow that offer nectar for adults.

The final generation, usually butterflies born after mid-August, enter reproductive diapause and make the long journey back to Mexico without reproducing, according to MJV. Depending on where they were born, this flight could be up to 3,000 miles (4,800 kilometers) and can take up to two months, according to the U.S. Forest Service.

Less is known about the migration of the western monarch butterflies. From October through February, adult butterflies in the western population overwinter along the California coast on native Monterey cypress and Monterey pine trees, as well as non-native eucalyptus trees, according to MJV. This population starts migrating north and east from the California coast in mid-February, traveling as far as southern Canada but staying west of the Rocky Mountains.

Not all monarch butterflies are migratory. For example, there are populations in Florida that don’t migrate, and it’s unclear if any mixing happens between them and migrating monarchs, according to MJV.

Southern monarchs (Danaus erippus) live only in South America and are considered distinct species from the monarch butterflies of North America, according to a study published in the Biological Journal of the Linnean Society. Some groups of southern monarchs in northwestern Argentina and the Bolivian Andes and lowlands migrate seasonally, while other groups in the Bolivian lowlands appear to be year-round residents, according to a 2015 study published in the journal Biotropica.

How do they navigate?

Exactly how monarchs navigate across such vast distances is a bit of a mystery, but scientists suspect the traveling insects use a combination of their internal clock, the sun and magnetic receptors to get where they need to go, according to MJV.

Monarchs migrate in the daytime, and studies suggest that monarchs can navigate using a sun compass mechanism, which incorporates signals from the butterflies’ biological clock with the location of the sun. However, monarchs still migrate on cloudy days when the sun is hidden, so it’s likely the butterflies also use an internal magnetic compass to navigate. A 2014 study published in the journal Nature found that monarchs orient themselves using an internal compass that relies on ultraviolet light sensors in their antennae. When exposed to ultraviolet light, monarch butterflies are able to point themselves south even if they can’t see the sun. 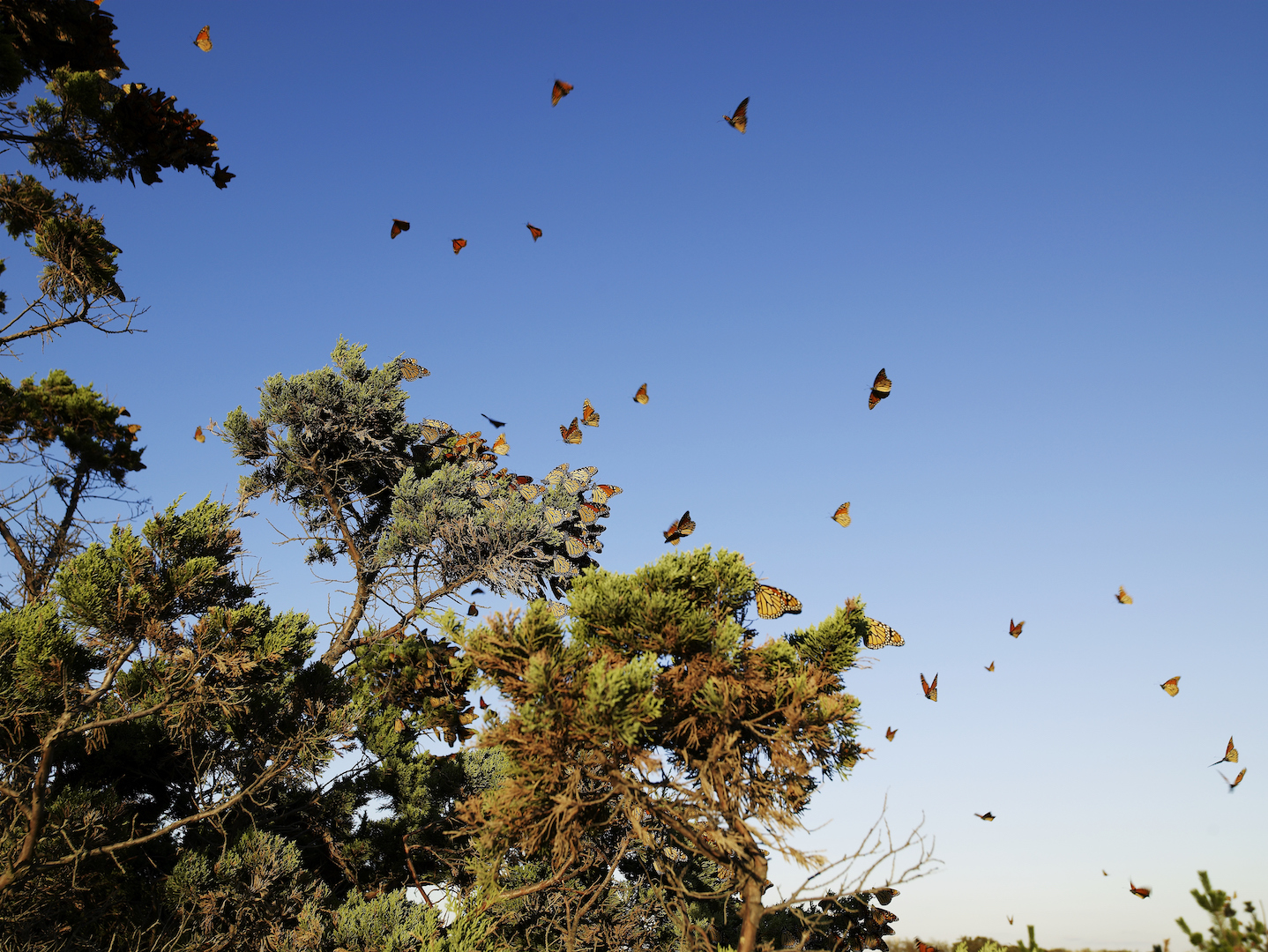 The population of North American monarch butterflies has declined drastically since the 1990s, from nearly 1 billion adults to just 35 million. Loss of habitat due to development and the use of agricultural herbicides that kill milkweed are the main causes, according to a 2016 study published in the journal Insect Science. The loss of plants that provide nectar for the butterflies could also be affecting populations, Lukens said.

Planting native milkweed species and other native plants that offer nectar helps support monarch populations, according to MJV. Research and conservation groups such as Michigan State University and the Xerces Society for Invertebrate Conservation offer more specific suggestions of ways to create and maintain butterfly habitats at home and in public places. Working to protect monarchs also helps other pollinator species, such as insects and birds, Lukens said.

In December 2020, after an assessment of the monarch butterfly population, the U.S. Fish and Wildlife Service concluded that “listing the monarch as endangered or threatened under the Endangered Species Act is warranted, but precluded by higher priority listing actions.” The decision gives monarchs “candidate” status, and the species will continue to be considered for listing each year until a decision is made.

Additional resourcesWatch a monarch butterfly emerge from its chrysalis, from the U.S. Fish and Wildlife Service.See video of the Mexico overwintering sight and learn about monarch migration from PBS’s It’s Okay to Be Smart.Learn more about milkweed and nectar plants from the Lady Bird Johnson Wildflower Center.
Source