More Than 30 Pelicans Have Been Mutilated on California’s Beaches 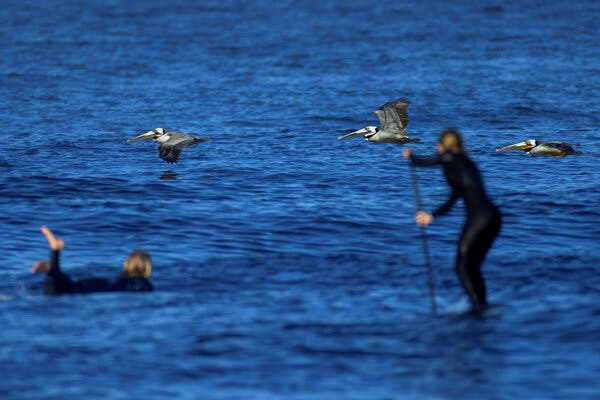 Since March, the Wetlands and Wildlife Care Center of Huntington Beach, Calif., has treated 32 pelicans with mutilated wings. Only 10 of the birds have survived, an official said.Mike Blake/Reuters

The lifeguards in Orange County, Calif., brought the injured brown pelicans to the veterinarian one at a time, the birds’ large wings mutilated, their bones twisted and fractured.

Debbie Wayns and her colleagues at the Wetlands and Wildlife Care Center, a nonprofit organization that works with injured wildlife, examined the birds and came to a conclusion about a likely cause: Someone had done it deliberately.

“It was just wrong on every level,” said Mrs. Wayns, the center’s operations manager. “There was no question that a person or persons did this.”

Since March, more than 30 pelicans have been attacked and injured along Orange County’s coastline, according to the Wetlands and Wildlife Care Center. The attacks have spurred an investigation by the California Department of Fish and Wildlife, which is working with the local authorities to find the person or people responsible, Mrs. Wayns said.

Of the 32 brown pelicans that Mrs. Wayns and her team have treated since March, only 10 have survived, she said.

The low survival rate is tied to the “extensive injuries that have been brought to them,” Mrs. Wayns said in an interview on Tuesday.

Debbie McGuire, executive director of the Wetlands and Wildlife Care Center, said many of the injured brown pelicans had bone fractures that protruded from their skin.

As they prepared for a recent operation, Mrs. McGuire said, she and the veterinarian who was performing the surgery couldn’t stop themselves from crying as they listened to the brown pelican screech in pain.

“This is so bad,” Mrs. McGuire said. “We need the public’s help to stop this. If you see something, say something.”

Mrs. Wayns said the authorities hoped that a witness would come forward, perhaps with video footage that shows someone injuring the bird.

“This isn’t something you can hide,” Mrs. Wayns said, emphasizing that the brown pelicans are large, noisy and sometimes aggressive. “The type of damage that’s happening with these pelicans, someone is brutally hurting these animals.”

It is a violation of California and federal laws to harm a brown pelican, according to the website of California’s Department of Fish and Wildlife. Department officials did not respond to a request for comment.

Dan Anderson, a professor emeritus at the College of Agricultural and Environmental Sciences at the University of California, Davis, who has been researching brown pelicans for over 50 years, said the birds used to be an endangered species. The use of DDT, a synthetic insecticide that was banned in the 1970s, caused a steep decline in California’s brown pelican population, he said.

There have also been cases, he said, in which people attacked brown pelicans that got too close to their boats as they were fishing.

“We’ve seen all this before,” Mr. Anderson said. “But this mutilation goes way too far.”

Even though pelicans are relatively large birds, they are essentially helpless when it comes to defending themselves against humans, said Hannah McDougall, communications coordinator for Pelican Harbor Seabird Station in Miami.

Last year, five brown pelicans were found in Southern California with straight slashes across their pouches. Conservationists were alarmed, saying at the time that they believed someone had hurt the birds on purpose.

“They’re a beautiful bird,” Ms. McDougall said. “It’s important to us that we protect them.”

Climate change has caused California’s brown pelicans to gradually move their breeding grounds northward, reaching as far as Oregon, Mrs. McGuire said. While the species isn’t currently endangered, she said, protecting the brown pelicans is essential for the state’s biodiversity.