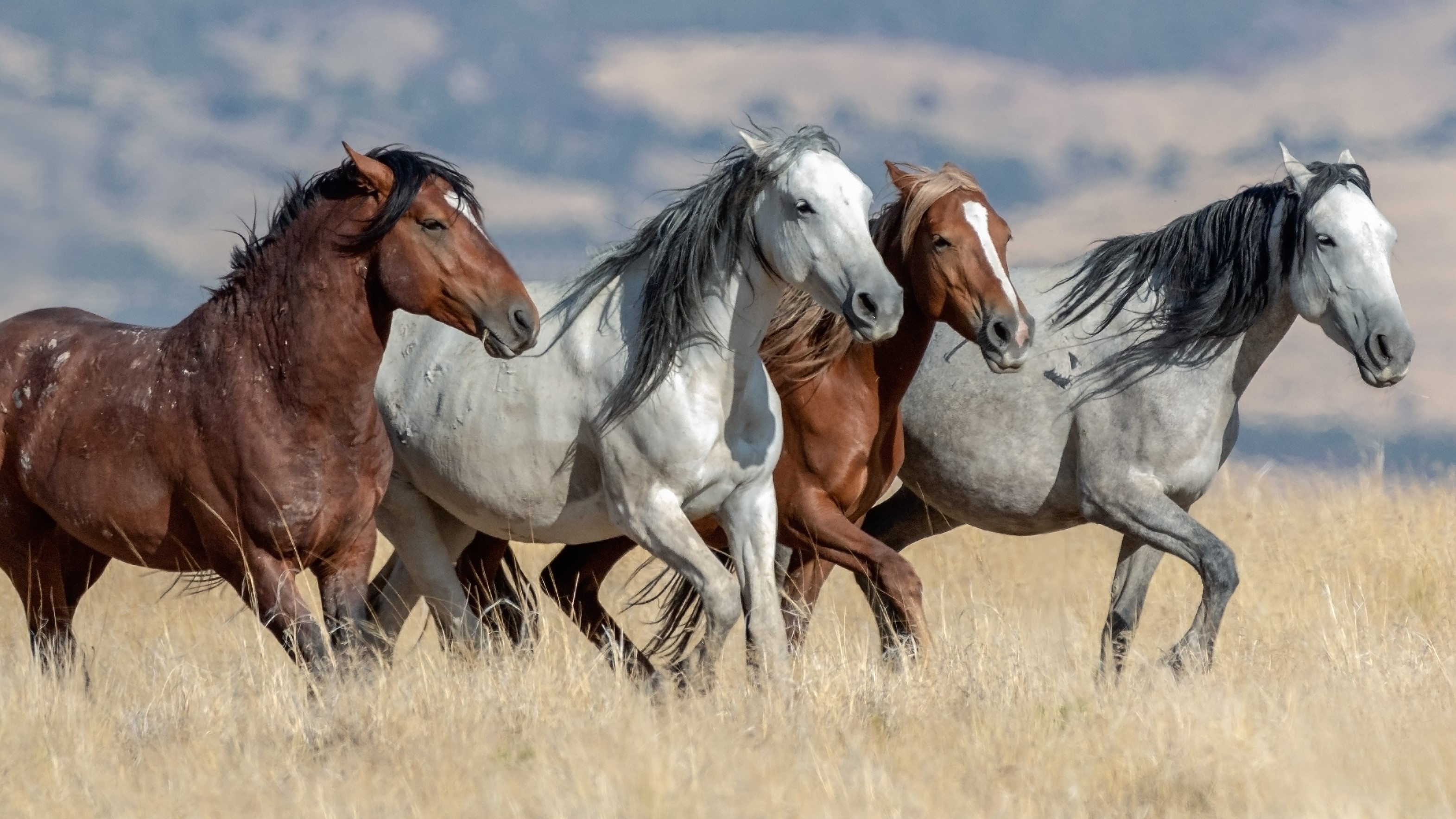 Mustang horses are descendants of escaped, domestic Spanish horses that were brought to the Americas by Spanish explorers in the 16th century. The name is derived from the Spanish words “mestengo” and “mostrenco” — meaning “wild or masterless cattle,” according to the Oxford Learner’s Dictionaries.

Mustangs are not technically wild horses because they came from a domesticated population, and so the mustangs living in the wild are considered feral, according to the American Museum of Natural History (AMNH). They can be found roaming free across the western United States but are also kept by humans in captivity and ridden like other horses. Mustangs have muscular bodies and hard hooves, which makes them suitable for scouting and trail riding, according to Horse Canada, a government-run equine website.

Horses belong to the genus Equus, which evolved in North America about 4 million years ago, before spreading out to the rest of the world. The last truly wild horses of America died out about 10,000 years ago, likely due to climate change and interactions with humans, Live Science previously reported.

Mustangs, which like other horses, are typically measured in hands,  typically stand 14 to 15 hands tall. This measurement equals 56 inches to 60 inches (140 to 150 centimeters). They weigh around 800 pounds (360 kilograms), according to the America’s Mustang program.

Mustangs can be a wide variety of different colors and, according to Oklahoma State University, their coats show the entire range of colors found in all horses. Usually, they are bay, which is a reddish-brown, or sorrel, which is a chestnut color. They can also have a variety of patches, spots and stripes.

Where do mustangs live and what do they eat?

Mustangs live in the grassland areas of the western U.S. and mostly eat grass and brush. The U.S. Bureau of Land Management oversees the “wild” horse and burro (donkey) populations, and allows them to run free on 26.9 million acres (10.9 million hectares) of public land. This range is split across 10 herd management areas in: Colorado, Nevada, Arizona, California, Idaho, Montana-Dakotas, New Mexico, Oregon-Washington, Utah and Wyoming. Feral horses also live on the Atlantic coast and on islands such as the Sable, Shackleford and Assateague Islands, according to Smithsonian Magazine.

Life in the herd

Mustang horses live in groups called herds. A herd consists of one stallion, and around eight females and their young, though separate herds have been known to mix when they are in danger, according to the Humane Society. Each herd is led by a female horse, or mare, and a stallion that is over 6 years of age. In dangerous situations, the head mare will lead her herd to safety, and the stallion will stay and fight.

Like other mammals, mustang horses give birth to live young, which are called foals. Mares carry their foal for an 11-month gestation period and typically give birth in April, May or early June, according to “The American Mustang Guidebook” (Willow Creek Press, 2001). This gives the young horse time to grow before the cold months of the year.

Domestics horses, which includes mustangs, usually live about 25 to 30 years in captivity, although some live into their 40s and beyond. Horses living in the wild, like the feral mustang populations on public lands in the western U.S., typically have shorter life spans, though they have been recorded living up to 36 years, according to the University of Michigan’s Animal Diversity Web (ADW).

Are there different types of mustang?

The original horses brought into North America by the Spanish have bred with other domestic horses over the years and so mustangs are typically a mixture of several different breeds. These breeds include draft (large horses bred to be working animals) and Thoroughbreds, according to National Geographic.

Mustang interbreeding varied between different populations and some are closer to their Spanish horse ancestors than others. For example, Kiger mustangs in Oregon live in small, isolated herds and their bloodline are largely descended from the early Spanish horses, which means they mixed less with other breeds, according to Oklahoma State University.

Can mustangs be tamed?

Mustang horses are known for having a wild nature, but they can be tamed and ridden like other horses. However, this process will take longer if they are taken directly from the wild — rather than bred in captivity — and they are not used to being handled by people, according to Horse Canada.

Cowboys used to catch, tame and sell mustangs in the Wild West — the western U.S. — from about the 1850s to 1900. These cowboys were called “mustang runners.” 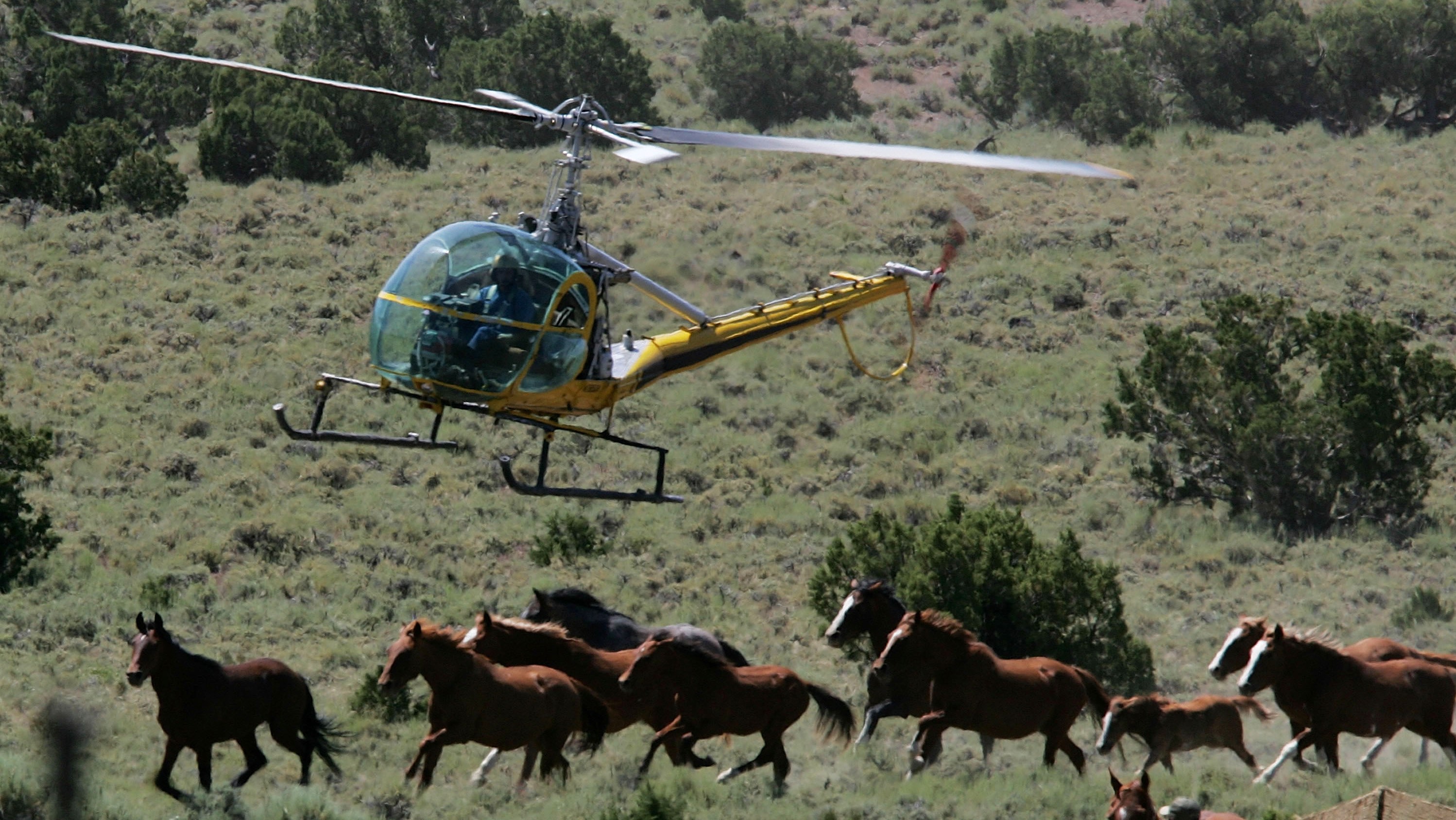 Mustang horses are not wild animals and therefore cannot be considered an endangered species. Feral populations descended from domestic animals, like mustangs, are not included on the IUCN Red List of Threatened Species.

There are currently more than 70,000 free-ranging mustangs in the U.S., according to the America’s Mustang program. Mustang numbers declined dramatically in the 20th century as the horses were killed and captured for a variety of reasons, including for human and dog food, America’s Mustang program notes. There were about 2 million mustang horses roaming the North American terrain in 1900; by 1971, their population had been reduced to just 17,300, according to AMNH. Mustangs then became protected on public lands, along with burros, under the Wild Free-Roaming Horses and Burros Act. Congress declared them “living symbols of the historic and pioneer spirit of the West.” This act also allowed for them to be managed and controlled.

The U.S. Bureau of Land Management controls mustang and burro numbers on public lands by capturing, holding and offering them for adoption. The process is controversial and some groups, such as the American Wild Horse Campaign, argue that mustangs and burros should be left on the public lands and that officials should, when necessary, instead use contraceptive treatments to control their numbers.

Without human intervention, the mustang horse population can increase rapidly because there aren’t many predators, such as wolves, to naturally control them, according to AMNH. The Wildlife Society, a wildlife management and conservation organization, considers feral horses and burros to be invasive species — non-native species that cause harm to native wildlife or local economies. The Wildlife Society argues that horses and burros compete with native wildlife and damage their habitats, such as by overgrazing and trampling vegetation. Cattle ranchers also complain about having to share land with feral horses, according to AMNH.

Nina Sen contributed to this article. This article was updated on May 4, 2021 by Live Science staff writer, Patrick Pester.

Is ‘Emotional Intelligence’ Even a Thing?…