Mysterious ‘blobs’ near Norway are full of squid mucus and embryos, study finds 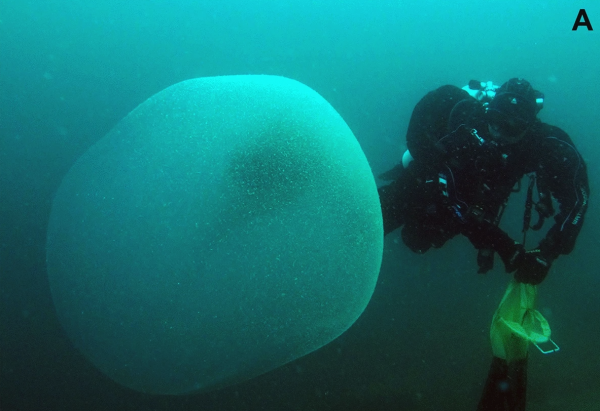 Several years ago, divers exploring the western coast of Norway encountered an object they couldn’t explain: An enormous, jelly-like orb, more than 3 feet (1 meter) wide, was hovering in place partway between the seafloor and the surface. A dark streak cut through the center of the orb, but the object was otherwise translucent and totally featureless.

It was, simply put, a perfectly inscrutable blob.

Nearly 100 similar blob sightings have been reported around Norway and the Mediterranean Sea since 1985, but the mysterious gelatinous masses have always evaded classification. Now, thanks to a year-long citizen science campaign and a new DNA analysis, researchers have finally identified the blobs as the rarely-seen egg sacs of a common squid called Illex coindetii.

According to a new study, published March 30 in the journal Scientific Reports, each blob may contain hundreds of thousands of teensy squid eggs, encased in a bubble of slowly disintegrating mucus. Remarkably, while scientists have known about I. coindetii for more than 180 years and have observed the species widely around the Mediterranean and both sides of the Atlantic, this is the first time they have identified the squid’s egg sacs in the wild, the researchers wrote.

“We also got to see what’s inside the actual sphere, showing squid embryos at four different stages,” lead study author Halldis Ringvold, manager of the marine zoology organization Sea Snack Norway, told Live Science. “In addition, we could follow how the sphere actually changes consistency — from firm and transparent to rupturing and opaque — as the embryos develop.” 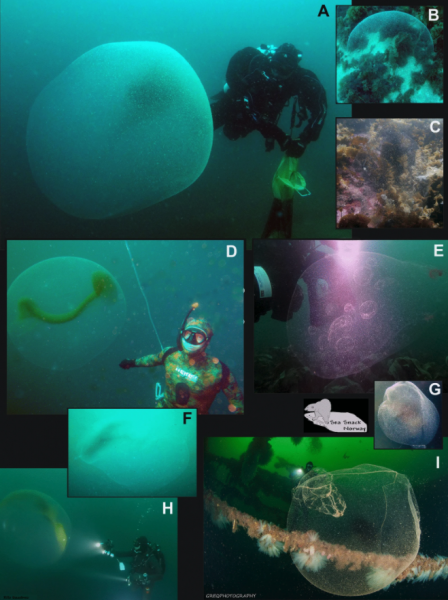 I. coindetii belongs to a common group of squids called Ommastrephidae. During reproduction, females in this group produce large egg spheres — or egg masses — made of their own mucus to keep their embryos buoyant and safe from predators, Ringvold said. However, sightings of these masses are rare, and some species’ masses have never been seen before.

When the Norwegian blob sightings became international news several years ago, some researchers suspected that the spheres were Ommastrephid egg masses, Live Science previously reported. But without a DNA analysis of the blob’s tissue, there was no way to show what squid species, if any, had created them.

So, Ringvold and his colleagues launched a citizen science campaign that encouraged divers to collect small tissue samples of any blobs they encountered in the waters near Norway. In 2019, divers came through with tissue samples from four separate blobs, which they collected in small plastic bottles and stored in home refrigerators (the tissue collection did not appear to damage the egg masses in any way, according to the study).

The samples included both the gooey body of the blobs, plus embryos at different stages of development. A DNA analysis of the tissues confirmed that all four blobs contained I. coindetii squids, the researchers wrote.

So, mystery solved? Partially. Without sampling tissues from every single sphere, the researchers can’t be sure that all of the nearly 100 observed blobs belong to the same species, the team wrote. However, given that all of these blobs were very similar in shape and size, it’s likely that “many of them” were made by I. coindetii, the team concluded.

As for the strange, dark streak running through many of the spheres? According to the researchers, this could be ink released when the eggs were fertilized.

“Spheres with or without ink may be a result of spheres being at different maturity stages, where spheres with ink are freshly spawned,” the researchers wrote in their study. “After a while, when embryos start developing, the whole sphere, including the streak, will start to disintegrate.”

The streak could also be a sort of camouflage mechanism, the team wrote, meant to mimic large fish and scare off potential predators. The solution to that mucus-y mystery will have to come another day.

Lightning Strikes Will More Than Double in Arctic As Climate Warms, Driving Increased Wildfires and Warming

$5,000 reward offered for information in case of pelicans…