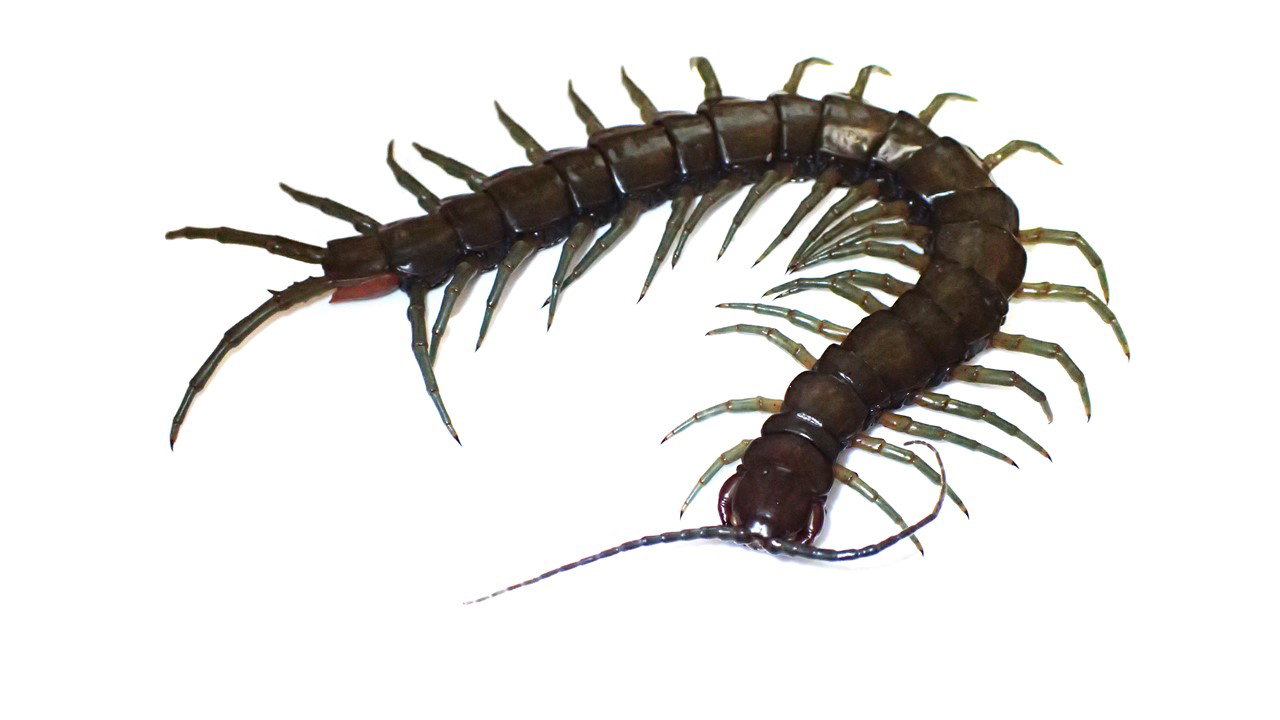 What has nearly two dozen legs, swims in forest streams and is longer than your hand?

Meet Scolopendra alcyona, a newfound species of amphibious, giant centipede that was recently discovered on several islands in an archipelago in Japan. It’s the first new species of centipede to be identified in the country in 143 years and is only the third swimming centipede worldwide in the Scolopendra genus, which includes about 100 species.

Leggy S. alcyona measures about 8 inches (20 centimeters) long, has 20 leg pairs and is the biggest known centipede in the Ryukyu Islands, a chain of about 200 non-volcanic islands that lies between Kyushu, Japan’s southernmost island, and Taiwan, according to a new study.

S. alcyona‘s species name comes from Alcyone, a woman in Greek mythology who was cursed by the gods after comparing herself to the goddess Hera and turned into a “halcyon bird,” now known as a kingfisher. One of the S. alcyona centipedes that was collected had jade-green legs that were similar in color to kingfisher legs; that and the centipedes’ preference for a watery habitat inspired the name choice, the study authors wrote.

In Japanese, the new species’ name is Ryûjin-ômukade, which is also rooted in mythology. Hundreds of years ago in the Ryukyu Islands, people decorated their boats with pictures of centipedes on flags as protection against ryujin — a dragon god. Local legends at the time told of a ryujin that feared centipedes after he had been bitten by one in the ear, according to a statement.

The researchers collected seven specimens of the then-unknown species, and seven centipedes of two other species in the Scolopendra genus — S. mutilans and S. subspinipes — gathering the centipedes from Okinawa-jima Island, Kume-jima Island, Chichi-jima Island and central Honshu in Kanagawa prefecture. They examined physical features in the undescribed individuals and conducted genetic analysis to place the arthropods on the centipede family tree, publishing their findings April 12 in the journal Zootaxa.

Some of the S. alcyona centipedes were found under stones in streambeds, or they were seen preying on river shrimp. Other centipedes evaded their would-be captors by diving into the rivers, suggesting that S. alcyona was equally at home in water and on land, according to the study.

Variations between certain physical features in animals can help scientists differentiate between species that are very similar, but such analysis can be tricky when it comes to Scolopendra centipedes, said study co-author Katsuyuki Eguchi, an associate professor in the Graduate School of Science at Tokyo Metropolitan University.

“Generally speaking, although Scolopendra species are large in body size, there are only a few morphological differences between closely related species,” Eguchi told Live Science in an email. Scolopendra centipedes also vary greatly in body color within a given species, which can complicate efforts to tell species apart. In the end, a combination of physical features — a spur on the 20th leg pair and the absence of specialized legs for transferring sperm to females — and molecular data identified S. alcyona as a distinct species, Eguchi said.

“The discovery of one of largest new species of terrestrial arthropods in Japan and Taiwan seems to indicate that the Ryukyu Islands are a treasure trove of nature and biodiversity,” Eguchi said. However, the scientists are concerned that plant and animal species that are still undescribed may be lost before researchers can identify them, “due to the alarming speed of the habitat losses.”

Giant centipedes such as S. alcyona are also much sought-after as pets, though they are extremely difficult to breed and sustain in captivity. Eager collectors for the pet trade could therefore also hasten the decline of these centipedes, Eguchi said in the email.

“We hope that our discovery will increase the momentum for the conservation of Ryukyu’s biodiversity,” he said.

CO2 Rise in The Amazon Could Affect Rainfall More Than…

The wave beneath their wings

Noisy environments can have detrimental effect on plants,…