Newts, tarantulas, ringtails: What you need to know about trail critters 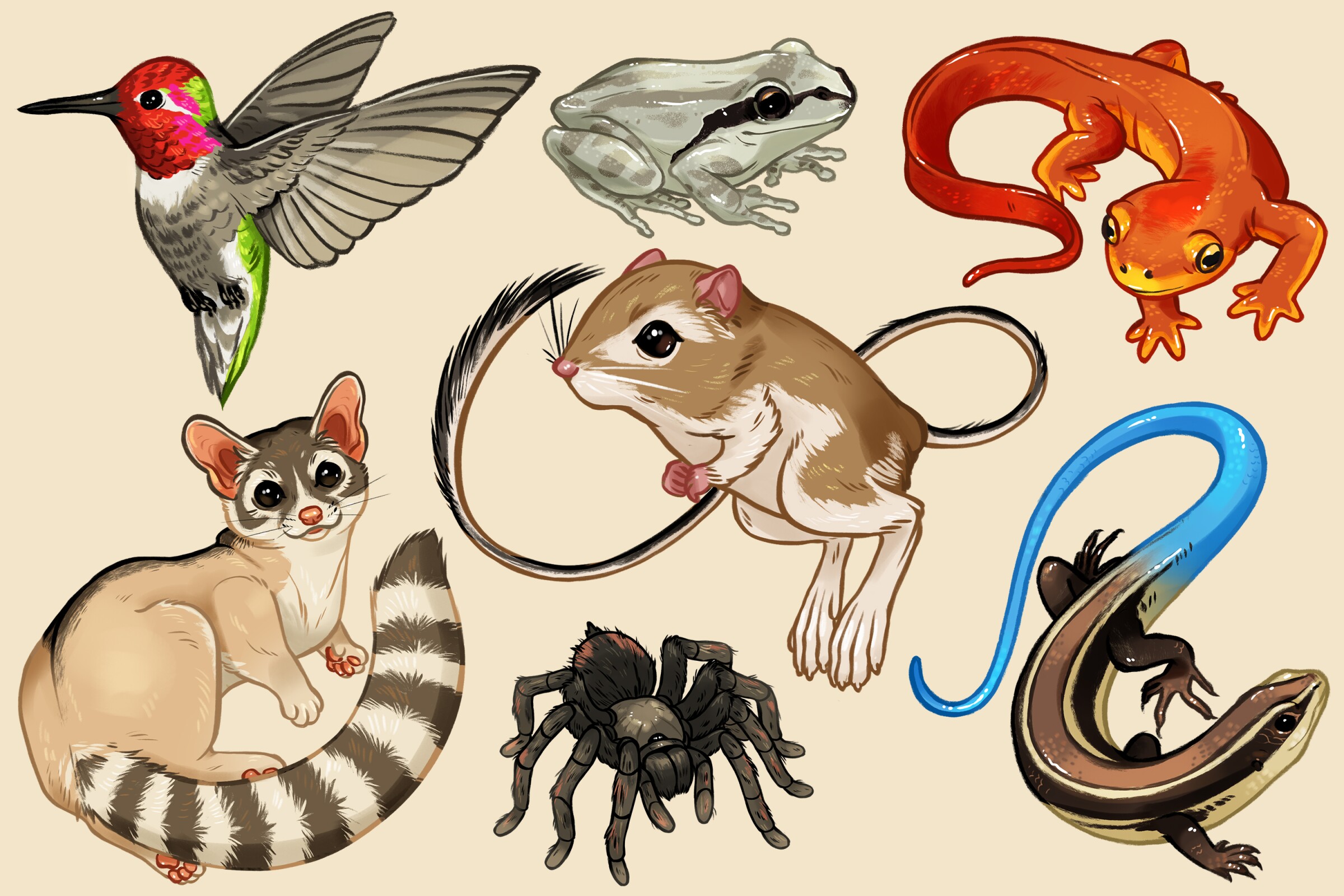 This story is part of our ultimate guide to hiking in L.A. You can buy a print copy at the L.A. Times store.

Spoiler alert: You probably aren’t going to see P-22 on a hike in Griffith Park. Coming in contact with a mountain lion on a trail in Southern California is beyond rare. But if you take the time to observe, there are other creatures you may encounter. Here are some of our favorites and what we think makes them special. Just don’t ever pick up or handle a wild animal. Your best chance to catch a glimpse of this track and “field” superstar is just before sunset when it heads out on its nocturnal grocery run. Kangaroo rats use the cover of night to transport seeds to their burrows for storage. On a successful food-gathering evening, rats can resemble a mini Marlon Brando in “The Godfather” with cheek pouches stuffed with seeds. Like their namesake, these rats use their long hind legs to leap distances spanning up to 9 feet. One more foot and they could dunk! (L.A. Lakers scouts, are you reading this?) Hikes near the Santa Clara River and the Antelope Valley offer opportunities to see these diminutive “roos.” Their off-the-charts cuteness means these orange-bellied amphibians are ripe for an in-the-wild touch tank experience, but don’t! These squishy members of the salamander family, if threatened, can secrete a powerful neurotoxin — a hundred times more toxic than cyanide — deadly to man or unfortunate predator. But that’s only if you ingest the poison. Best to watch them swim and rest in the shallow pools of creeks in the Santa Monica Mountains. Even though they’re small and mighty, this newt is in danger from invasive species introduced by man and is on California’s Species of Special Concern list.

A guide to hiking in L.A.

A guide to hiking in L.A.

Why hike in Los Angeles? Lots of reasons. Use our guide to navigate 50 trails in Southern California, plus tips on gear and treats for the trail. Don’t be fooled by their fuzzy good looks. Hand-size tarantulas are docile but do have a secret weapon: microscopic spikes on their hind legs that they shoot when they feel threatened. If you’re at eye level — not that you should be — you could get an eyeful (people have). Tarantulas bite too, but those bites aren’t deadly. Tarantula mostly hang out underground during daylight hours, but in late summer and early fall the males surface to mate with a willing female. Expect to see them in many areas in Southern California. A Disney artist could have dreamed up these little hummers. The glint of magenta on a silvery green body makes them look “more like flying jewelry than bird,” the Cornell Lab of Ornithology says. Of course, only the males have bright throats. The birds, no larger than a ping-pong ball, are New World creatures are named for the 19th century French duchess Anna Massena, wife of an amateur ornithologist who collected bird skins. You must be quick to see these speed demons — 25 mph in flight, faster when they’re courting — in downtown L.A. or on the trails. Another endearment: A flock of hummingbirds is called a “charm.” Ringtails have cat-like faces, which leads to their other name, ringtail cats, but they are related to racoons. The most dramatic feature is the tail, which can be longer than its slender weasel-like body. One biologist declared their cuteness factor, on a scale of 1 to 10, to be a 15. Your chances of seeing them? Slim, but not impossible. They are nocturnal and lead solitary lives, except when it’s mating time. They do live in the Angeles and Los Padres national forests, so keep your eyes peeled when you’re out camping at night. . This is the only frog in the world that actually says “ribbit.” You can thank Hollywood studios for recording the local frog call and using it in movies. When Rambo runs through the Vietnamese jungle? Yep, the frogs you hear are local crooners. Somehow the frog made the leap to a foreign planet in at least one “Stargate SG1″ episode. Of course ribbit isn’t the only sound they make; these frogs have six types of calls. Look for the mottled brown frogs with a distinctive eye stripe in the early morning or at dusk on hiking trails near creeks and marshes. From Malibu to La Jolla, here are five Southern California trails that do something most hikes don’t — take you to the edge of the ocean. Often the only part of this animal you’ll see is the flash of a long, electric blue tail. That’s the Western skink, which has dark brown and light beige stripes, one edged in black, on a body that wields that astonishing tail. Skinks don’t hang out and bask in the sun the way other lizards do. They jet across the trail. Consider yourself lucky if you get a picture of one curled up for a fleeting moment. Skinks are about 7 inches long, and their blue tails fade as they get older. Don’t touch them because, like other lizards, they may drop their tails, which could affect their life span and life cycle.

Forest ranger stumbles onto garden of ancient beasts in…