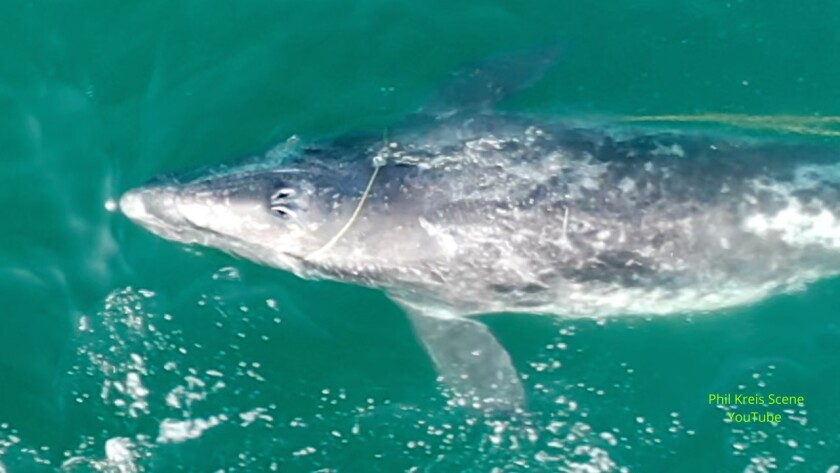 The plight of an entangled baby whale off Orange County has sparked an urgent multi-agency rescue effort, highlighting again the perils that ocean debris poses to marine mammals and other wildlife.

The baby gray whale has a rope around its mouth and trailing in the water behind it. That’s prompted a team of ocean animal experts from Dana Point to Monterey to closely follow the whale, hoping to get close enough to extricate it.

As the calf grows, the rope could tighten around it, potentially tearing off skin or breaking limbs. The consequences could be deadly.

“Unfortunately, with most of these entanglements, if the whale can’t get it off and we can’t get it off,” said Justin Viezbicke, California Stranding Network coordinator for the National Marine Fisheries Service, “they ultimately lead up to death.”

Hugging the California coast, the calf and mother are making the arduous annual migration to forage off Alaska. They left behind their winter home in Mexico, where Viezbicke said the mother probably spent a busy season breeding and calving, to swim 24 hours a day on a dwindling supply of energy. A bastion of killer whales looms ahead in Monterey, he added.

A photographer who volunteers at the Pacific Marine Mammal Center in Laguna Beach spotted the mother-child pair Monday while aboard a Captain Dave’s Dolphin Safari tour near Dana Point Harbor, said Krysta Higuchi, PMMC spokesperson. A team of PMMC and National Oceanic and Atmospheric Administration workers quickly loaded onto a boat to rescue the entangled whale.

Each year, according to NOAA, billions of pounds of trash enter the ocean, and nets, ropes and other gear from boats add to the debris.

In the current rescue, Viezbicke said, the goal is to save the whale but also learn how to prevent another entanglement. NOAA reported 17 whale entanglements along the West Coast last year.

“The entanglement response team is really a Band-Aid,” Viezbicke said. “We want to be more preventative in nature than reactive.”

But when the boat approached the pair, Viezbicke said, the mother whale went into protective mode — pushing the calf toward shore while positioning herself between it and the boat, hiding her child beneath her and flipping underwater to evade the rescue team.

Whales are dying, but numbers are unknown. Coronavirus has stalled scientific fieldwork 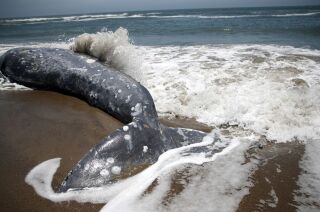 Whales are dying, but numbers are unknown. Coronavirus has stalled scientific fieldwork

Stay-at-home requirements have upended the field work of researchers, including that of scientists and volunteers who track migrating gray whales.

“Just like any protective parent, the last thing you want is a boat zooming around the water and pinning your child down,” Viezbicke said, adding that the calf is probably less than a year old. “This is clearly not this mom’s first rodeo.”

After nearly five hours, the mother whale was so agitated, he said, the team decided to go home.

“That adds a whole other dynamic to this where it’s really about human safety,” Viezbicke said. “All it takes is one swing of that tail and we’re done. It makes it super dangerous.”

On Tuesday, whale watcher Phil Kreis took his drone to Point Dume in Malibu to see the sights. He filmed the calf gliding through seafoam-green water, the rope dangling from its mouth. It was only the second time Kreis had ever captured footage of a calf, so he was euphoric.

“It’s kind of like a video game. When it comes in, it’s exhilarating,” Kreis said. “It’s awesome. I love it when the whales come in.”

Just as he was packing up the drone for the night, fellow whale enthusiast Alison Mytych called. Mytych has religiously counted whales during migration season for the past nine years. All of Tuesday, she had been on high alert for the mother-calf, spending the entire day at Point Dume beach because of a “gut feeling” that they would swim by. As she stepped away for tea, she called to check in with Kreis and heard about his sighting.

Mytych quickly calculated how fast the whales had been swimming, then jumped into her car. As she drove along Pacific Coast Highway to the beach where she estimated they’d go next, she said she spotted the pair in the water.

“I was like yes, yes, yes!” Mytych said in an interview Thursday. While feeding information to NOAA, she followed the whales to another beach before watching them swim away from Leo Carrillo State Beach into the sunset.

“It was absolutely perfect,” she said, adding that she has loved whales her whole life.

Three gray whales have died on their recent southbound journey along the West Coast, prompting fears of another year of strandings and questions about what is imperiling the creatures.

A former nurse, Mytych has been enduring cancer treatments throughout the pandemic.

“Being out at the beach for the whales has motivated me to get back out, to get back in shape, to get my stamina back, my energy back,” she said. “The whales, as much as I love seeing [them], I feel like they help me.”

Viezbicke said he expects the whales will show up next in Monterey, where killer whales live. The mother will probably be even more protective of her young, he said, which could make for another difficult encounter with the humans trying to help. A team of experts from California to Washington are preparing for their arrival — and hopefully a rescue.

Spring 2021 STEM and STEAM Activity Books for Kids and Teens

L.A. Unified to roll out major COVID-19 vaccine effort at…

Outcry over plans for Sussex holiday village next to rare…