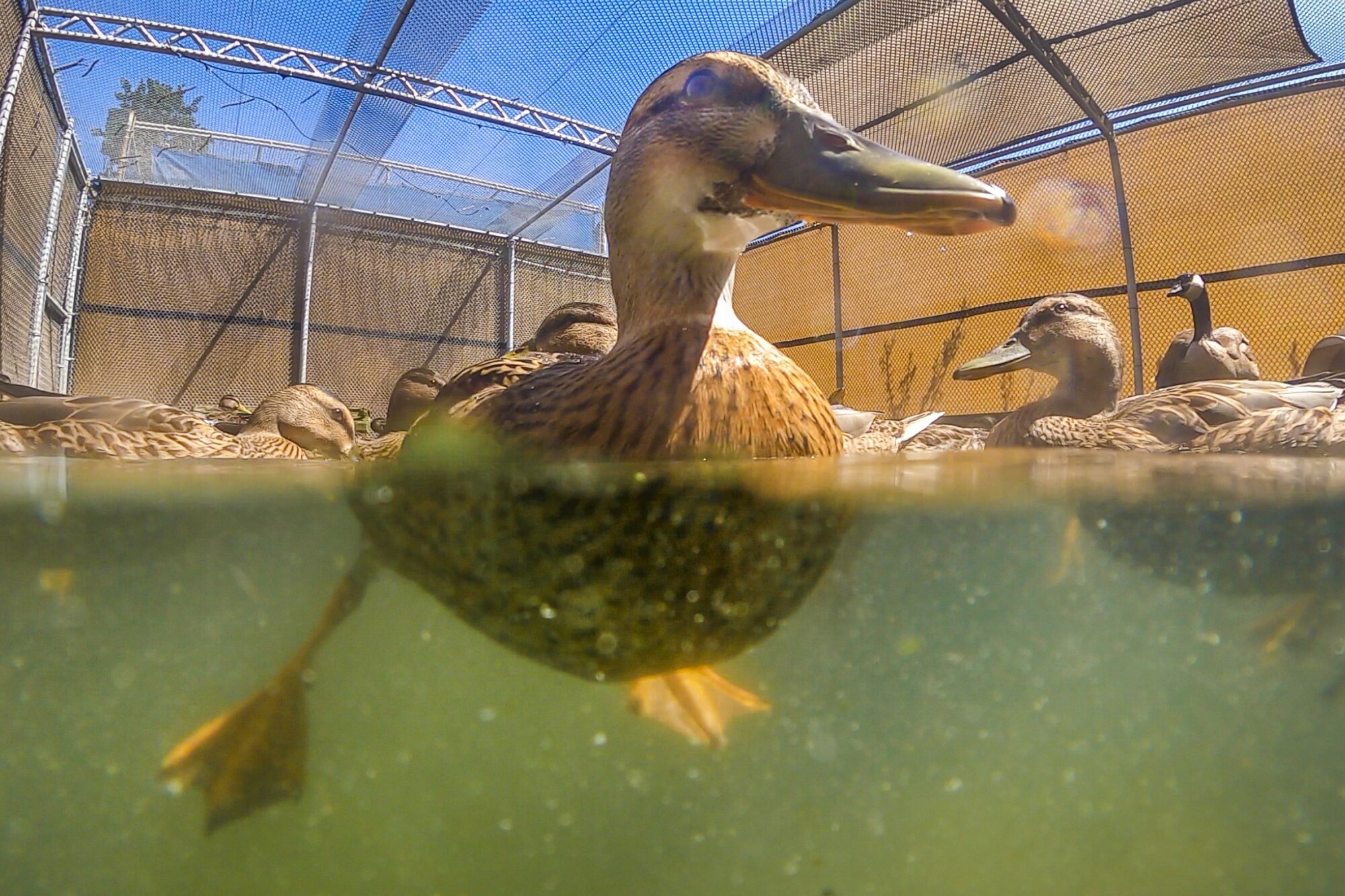 A variety of ducks and ducklings swim after “a tsunami of orphans came in,” according to Debbie McGuire, board member and executive director at the Wetlands and Wildlife Care Center in Huntington Beach.(Allen J. Schaben / Los Angeles Times) Share Close extra sharing options

Around this time every year, the Wetlands and Wildlife Care Center in Huntington Beach is filled with quacking from hundreds of ducklings orphaned during spring “baby season.”

In part because of the coronavirus pandemic, this spring has been especially busy. The center is seeking help from community members to feed and care for more than 500 young birds, operations manager Debbie Wayns said.

“For whatever reason, these ducklings were abandoned by mom, or mom was killed, and so then these babies aren’t old enough to survive on their own, so they were brought to us either by the public or by animal control,” Wayns explained.

More baby mallards are expected soon from nearby Disneyland, which usually drops off thousands every year so they are out of harm’s way at the busy theme park, Wayns said.

Last year, with the park closed because of the pandemic, the center didn’t get any ducklings from Disneyland.

“For us to be so swamped with ducklings right now, and we’re not even getting Disneyland ducks, is a little scary,” she said, laughing. Wayns attributed the influx of birds, in part, to the pandemic. People working from home are more likely to notice wild animals and take them to the center.

Most of the ducklings are the mallards commonly seen in parks, though rarer varieties sometimes find their way to the center.

Often, Wayns said, members of the public bring in wildlife from their backyards, mistakenly believing that the animals — for example, ducklings in a swimming pool — are in distress.

“If you see mom and ducklings around, leave mom and ducklings alone,” Wayns said, adding that people should refrain from feeding wild animals. “It’s only cute for two weeks until they start pooping in your pool or pooping your backyard. And then they have pet ducks!”

Ducks can travel up to three miles, Wayns said, and if the mother is still present, the birds are likely OK. Baby animals taken away from their mother or natural habitat will have a harder time adjusting to life in the wild.

“Their best chance of survival is really in the wild with their family,” she said.

Some animals do come to the Wetlands and Wildlife Care Center injured or, like the ducklings, orphaned. If an animal has noticeable wounds or blood on it, or if it has been attacked by a pet, it should be cared for professionally, according to Wayns.

The mission of Wetlands and Wildlife Care Center is to rehabilitate animals, raise them and release them back into the wild.

“If it’s hurt, if there’s any indication that it’s hurt or it’s sick, by all means bring it to us — and the sooner the better for that,” she said. 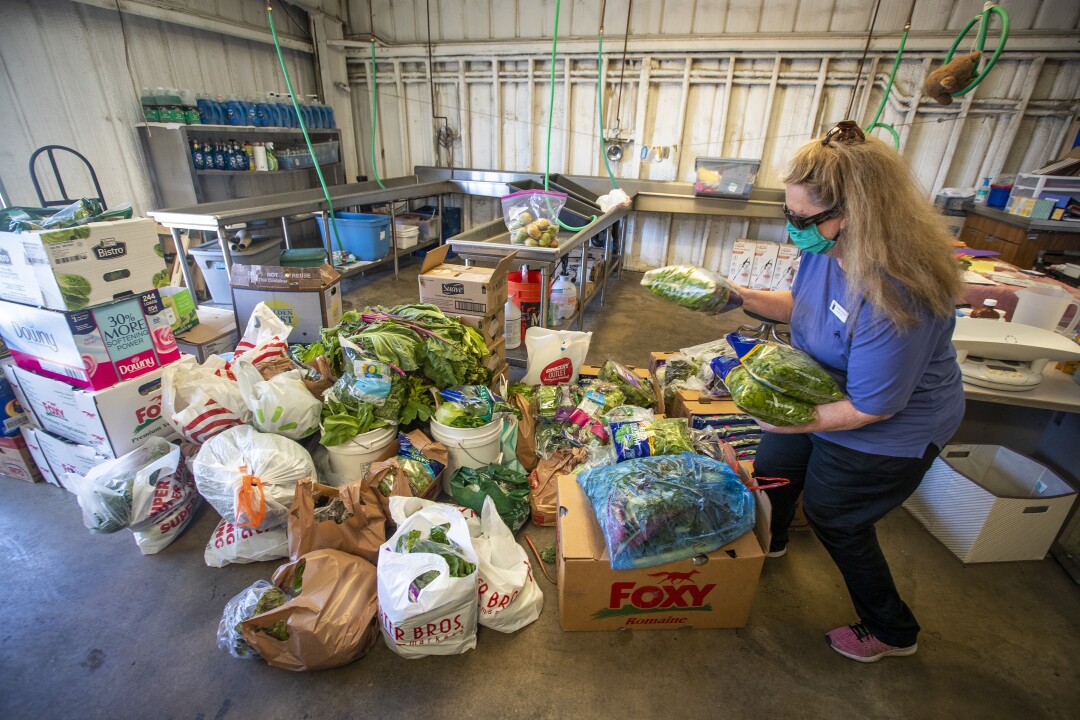 All those ducklings add up to many hungry mouths to feed.

The center posted a plea on Facebook on Monday, asking for donations of lettuce. Mustard greens, kale, Swiss chard and other greens poured in.

“The response has been wonderful,” said volunteer Belinda Shepherd. “It’s made a huge difference for us. We’re usually crying for lettuce.”

Shepherd, who usually spends one or two mornings a week at the center, begins her day with the baby ducks — giving them water, mincing the greens in a food processor and cleaning out their cages.

“That’s their favorite thing of the whole day is the lettuce,” Shepherd said. “Oh, my gosh, they love it … they devour it.”

Many people donated another kind of green, too.

Wayns said the center received about $5,000 Monday, which will cover about three days of food and care for the animals. The center is soliciting more donations to keep the ducklings for the roughly two months they’ll spend there, until they’re fully feathered and ready to return to the wild.

The baby birds are kept in temperature-controlled nursery cages until they graduate to “elementary school,” “junior high” and “high school,” with increasingly more time spent outside and in pools until they are acclimated and able to be released, Wayns said.

“We get them from start to finish,” she said. The center needs helping hands, too. About eight staff and 100 volunteers keep the place humming, caring for thousands of animals every day.

“The volunteers are our lifeline,” Wayns said. “If it wasn’t for them, we wouldn’t be able to do it.”

Cool Jobs: Saliva offers a spitting image of our health

Brain Shrinkage: Your Neighborhood May Affect Your Brain…

How an elephant’s trunk manipulates air to eat and…