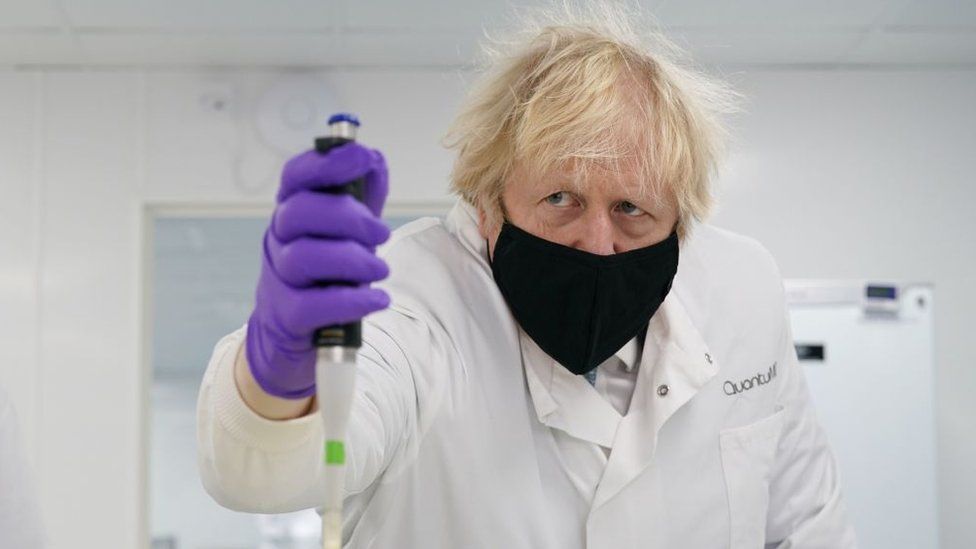 The prime minister has set out plans to cement the UK's place as a "science superpower".

Boris Johnson announced how increases in the research budget would be spent.

He will chair a new National Science and Technology Council to provide "strategic direction" on how research is harnessed for the "public good".

And Sir Patrick Vallance, the chief scientific adviser to the government, will lead a new Office for Science and Technology Strategy.

He will take up the role of the new national technology adviser, alongside his current role.

Mr Johnson said the UK's vaccination programme had proven what the UK can achieve at scale and speed.

"With the right direction, pace and backing, we can breathe life into many more scientific and technological breakthroughs that transform the lives of people across the UK and the world," he said.

This government plans to put its money where its mouth is as it talks about plans to reinforce the UK's position as a global science superpower.

The stated aim is to use the extra money to tackle societal challenges, such as the impact of climate change, level up across the country and boost prosperity around the world.

As ever though, with greater budgets, comes greater ministerial supervision – in the form of a new committee chaired by the prime minister.

On the one hand it puts science at the heart of government, but on the other there's concern that there will be more political control on research budgets that could mean money being diverted toward pet projects – rather than spent on what is independently judged by experts to be best for science – as happens currently.

The Office for Science and Technology Strategy will aim to push forward the government's research priorities. It will also identify resources needed to secure the UK's science capability.

The prime minister is said to want to build on the success of the UK's approach to vaccines and apply it to other priorities, such as developing technology to reach net zero carbon emissions and curing cancer rather than simply treating it.

Writing in the Daily Telegraph on Monday, Mr Johnson referenced the coronavirus pandemic when he said: "I cannot think of a time in the past 100 years when the entire population of this country has been so deeply and so obviously indebted to science – and to scientists."

"We have spent too long in a state of semi-detachment from science," he added, "as though it was something intimidating and remote from out lives.

"If the Covid experience has taught us anything, it is that government does have a role in making demands, in explicitly framing the challenges we hope science can meet.

"If we don't, there are others who will. We made no particular effort to develop 5G, for instance, and we have paid a price. For the first time since the Second World War, the biggest Western democracies were left behind in the race for a significant new communications technology. It is a mistake that has proved expensive to rectify, and we do not want to make another one like it."

Sir Patrick said the new office would put science and technology "right at the heart of policy making" and strengthen working across government.

He added that he looked forward to helping identify "cutting-edge research and technologies that deliver strategic advantage for the UK".

AI used to 'predict the next coronavirus'

Microplastics Found in Europe’s Largest Ice Cap – In a…

Even Closed Oil Wells Are Still Spewing Methane Into The…