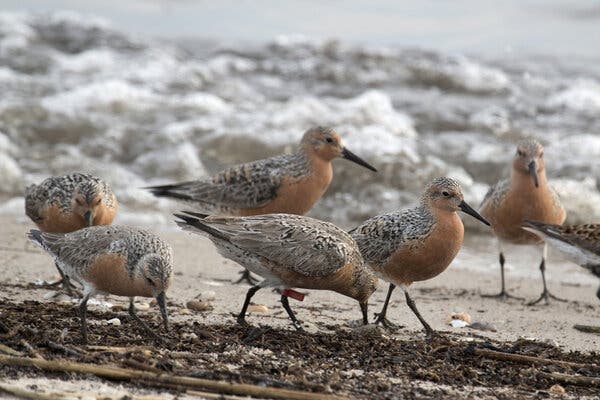 Conservationists found fewer than 7,000 of the bird’s rufa subspecies during extensive counts on land, air and water on the New Jersey and Delaware sides of the bay last month.Business Wire, via Associated Press

The number of red knots visiting the Delaware Bay beaches during this spring’s northbound migration unexpectedly dropped to its lowest since tallies began almost 40 years ago, deepening concern about the shorebird’s survival and dealing a sharp setback to a quarter-century of efforts to save it.

Conservationists found fewer than 7,000 of the bird’s rufa subspecies during extensive counts on land, air and water on the New Jersey and Delaware sides of the bay during May. The number is about a third of that found in 2020; less than a quarter of the levels in the previous two years; and the lowest since the early 1980s when the population was about 90,000.

Numbers were already well below the level that would ensure the bird’s survival. An earlier decline had been halted by years of conservation efforts, including a ban by New Jersey on the harvesting of horseshoe crabs, whose eggs provide essential food for the birds on their long-distance migrations.

The latest drop makes the rufa subspecies — which has been federally listed as threatened since 2014 — even more vulnerable to external shocks, such as bad weather in its Arctic breeding grounds, and pushes it closer to extinction, naturalists say.

“I think that we need to think about the red knot as a species that is dying, and we really need emergency measures,” said Joanna Burger, a biologist at Rutgers University. She has studied the knot and other declining shorebirds such as ruddy turnstones and semipalmated sandpipers on the Delaware Bay since the early 1980s.

She called for an immediate ban on the harvesting of horseshoe crabs for bait, an industry that is still active in Delaware, Maryland and Virginia, and which is subject to quotas by the Atlantic States Marine Fisheries Commission. Although the regulator does not permit the harvesting of female crabs, naturalists say the rule is not strictly enforced, resulting in the loss of some of the egg-laying animals and a consequent reduction in the birds’ food supply.

The new decline also amplified naturalists’ calls for the pharmaceutical industry to stop using LAL, an extract from the crabs’ blood that is deployed to detect bacteria in vaccines, drugs and medical equipment. A synthetic alternative, rFC, is available, and is used by at least one pharmaceutical company, but the industry as a whole has been slow to adopt the new technique, resulting in continued demand for horseshoe crabs in the bay. 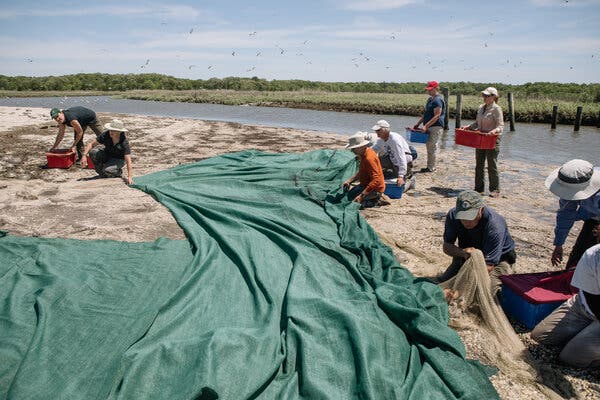 Volunteers trapped shorebirds for counting and tagging at Reeds Beach in Middle Township, N.J., in 2019.Michelle Gustafson for The New York Times

Although the crabs are returned to the ocean after bleeding, conservationists estimate that up to a third die or are unable to breed. Ironically, there were plenty of crab eggs to eat on the bay beaches this year, but a long-term decline in the availability of eggs has severely dented the birds’ population, thinning any cushion that would enable the species to survive natural hazards.

Larry Niles, an independent wildlife biologist who has trapped, monitored and counted shorebirds on the bay beaches of New Jersey for the last 25 years, said he had been expecting some decline in this year’s red knot count because of signs of a poor breeding season in 2020, but was shocked by the size of the drop.

He said it’s likely traceable to low ocean temperatures in the mid-Atlantic during the 2020 migration. The cold water delayed the spawning of horseshoe crabs until early June, by which time the birds had already left the Delaware Bay in an attempt to complete their migration.

Many of the birds, weighing only 4.7 ounces when mature, are already emaciated after flying from Tierra del Fuego in southern Argentina in one of the longest migrations in the avian world. Some fly nonstop for seven days before reaching the Delaware Bay where they typically stay for about two weeks to rest and regain weight.

But last year, many were unable to find food on the bay, and so continued northward in an attempt to reach their breeding grounds. Dr. Niles estimated that around 40 percent of last year’s migrants died before they reached the Arctic, simply because they ran out of energy.

This year, he also blamed predation by peregrine falcons, whose growing coastal population has been helped by the construction of nesting platforms by New Jersey. They frequently hunt over the bay beaches, making it harder for flocks of shorebirds to feed and put on weight.

The best hope for the species to survive lies in a complete ban on harvesting female horseshoe crabs until the crab population recovers, Dr. Niles said.

“Rufa knots, especially long-distance red knots, could be lost,” he said in a note to supporters. “We can’t stop bad winds or cold water, but we can expand the population of horseshoe crabs, so birds arriving in most of these conditions find an abundance of horseshoe crab eggs.”