Scientists analyze the domino effect of breast cancer escalation How scientists figured out a reason behind breast cancer metastasis in the lymph nodes. It’s a cascade of chemical reactions that activate one another until metastasis results.

How scientists figured out a reason behind breast cancer metastasis in lymph nodes. It’s a cascade of chemical reactions that activate one another until metastasis results. 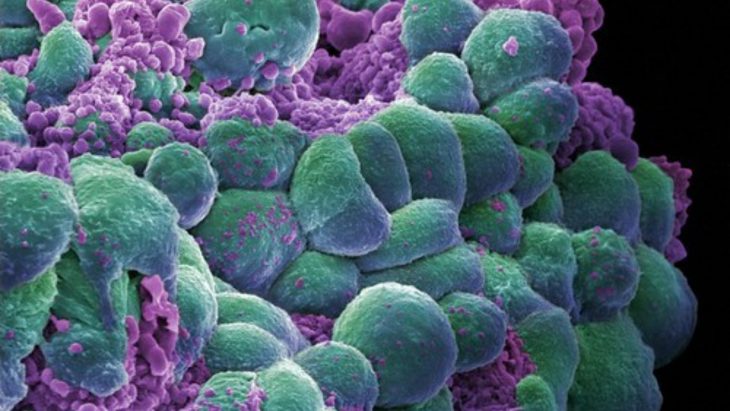 When people think of cancer, breast cancer is usually one of the first mentioned, and rightfully so. Research has shown that breast cancer is the most common type of cancer. Not only does breast cancer occur often, but it is also ranked in the top 5 deadliest cancers. The reason for this high death rate has been determined to be metastasis, the movement of cancerous cells to other locations in the body. These malignant cells are invasive and deadly because they grow back even when removed, unlike benign tumors that cannot spread and will not grow back. So why is this important to note?

Since metastasis is the leading cause of death for breast cancer patients, scientists are still working to figure out how and why this occurs. Further research on the correlation between metastasis and breast cancer revealed that the groups of cells in our body that fight infection, lymph nodes, are the primary region where metastasis occurs. A study was conducted to pinpoint exactly why lymph nodes are involved.

The researchers compared primary tumor cells, metastatic lymph node samples, and normal cell samples to identify biochemical differences in these tissues that might explain metastasis. The researchers found a large amount of a long piece of RNA named “LINC02273” in breast cancer cells that had metastasized to the lymph nodes. This piece of RNA, they realized, becomes more stable once it binds to a protein called hnRNPL. When there was more hnRNPL, there was more of the RNA as well. The researchers then identified a gene that regulates cancer progression, AGR2. This gene is important because LINC02273 binds to AGR2 promoter genes, genes that promote the activation of AGR2. With the activation of AGR2, metastasis increases and the cancer progresses.

This “metastasis system” consists of four components where each part has a direct impact on the next. You could compare the function of this system to the concept of the Domino Effect, where the downfall of one domino directly impacts the one immediately following. The initial domino would be the hnRNPL protein that initiates the entire process leading to the breast cancer metastasis to the lymph nodes. The rest of the dominoes fall with LINC02273 first, then the AGR2 promoter genes are turned on, and then AGR2 is activated. The result of the last domino falling would lead to metastasis.

What Do Scientists Actually Do When They Research ‘Dangerous’ Viruses in The Lab?

Urban pollution can pose unseen risks to kids’ immunity and…

Nature ‘more important than ever during…