Scientists Drove Mice to Bond by Zapping Their Brains With Light 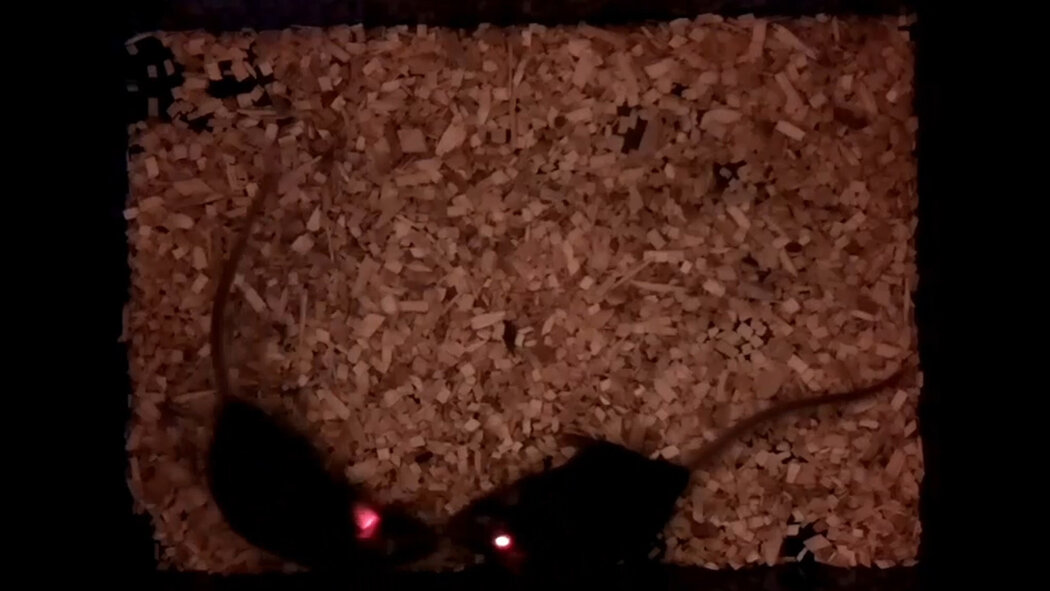 Mice with tiny devices implanted in their brains showed a great affinity to one another in an experiment when the signals were synchronized.CreditNorthwestern University 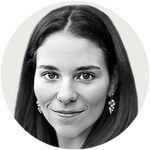 Late one evening last March, just before the coronavirus pandemic shut down the country, Mingzheng Wu, a graduate student at Northwestern University, plopped two male mice into a cage and watched as they explored their modest new digs: sniffing, digging, fighting a little.

With a few clicks on a nearby computer, Mr. Wu then switched on a blue light implanted in the front of each animal’s brain. That light activated a tiny piece of cortex, spurring neurons there to fire.

Mr. Wu zapped the two mice at the same time and at the same rapid frequency — putting that portion of their brains quite literally in sync. Within a minute or two, any animus between the two creatures seemed to disappear, and they clung to each other like long-lost friends.

“After a few minutes, we saw that those animals actually stayed together, and one animal was grooming the other,” said Mr. Wu, who works in the neurobiology lab of Yevgenia Kozorovitskiy.

Mr. Wu and his colleagues then repeated the experiment, but zapped each animal’s cortex at frequencies different from the other’s. This time, the mice displayed far less of an urge to bond.

The experiment, published this month in Nature Neuroscience, was made possible thanks to an impressive new wireless technology that allows scientists to observe — and manipulate — the brains of multiple animals as they interact with one another.

“The fact that you can implant these miniaturized bits of hardware and turn neurons on and off by light, it’s just mind-blowingly cool,” said Thalia Wheatley, a social neuroscientist at Dartmouth College who was not involved in the work.

For centuries, she noted, most neuroscientists have been focused on the individual brain and the function of its various parts. “The whole field is built on looking at a brain in a jar — Where’s memory? Where’s vision?” Dr. Wheatley said. But to understand nuanced social behaviors, which by definition can’t be observed in isolation, “it’s very important that we’re beginning to look at more than one brain at the same time.”

The new study also raises questions about a tantalizing phenomenon that has been observed in humans for decades, with potential implications for everything from social anxiety disorders to pandemic isolation: When two people interact, their brain patterns align in intriguing ways. 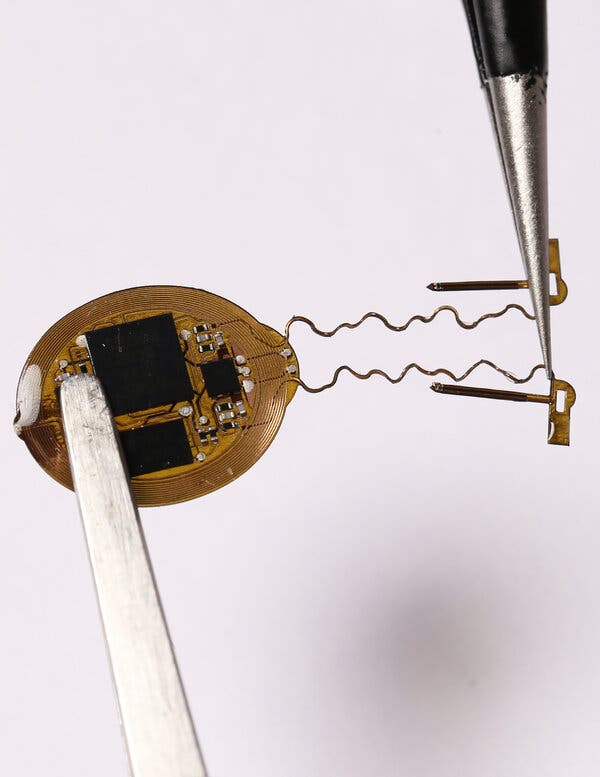 An optogenetic device used a tiny LED light, implanted into the mice’s brains, to activate groups of neurons.Northwestern UniversityFrom ghosts to bats

When research on so-called interbrain synchrony emerged in the 2000s, some scientists dismissed it as parapsychology, a trippy field of the 1960s and ’70s that claimed to find evidence of ghosts, the afterlife and other wonders of the paranormal.

In 1965, for example, two ophthalmologists published in the prestigious journal Science an absurd study of 15 pairs of identical twins. Each twin, with electrodes on their scalps, was placed in a separate room and asked to blink on command. In two of the pairs, the study reported, one twin showed distinctive patterns of brain activity while the sibling was blinking in the other room. The doctors called it “extrasensory induction.”

“The paper is hilarious,” said Guillaume Dumas, a social physiologist at the University of Montreal who has studied brain-to-brain synchrony for more than a decade. In that far-out era, he said, “there were many papers with methodologically questionable conclusions claiming to demonstrate interbrain synchronization with two people.”

Since then, however, many sound studies have found brain synchronies emerging during human interactions, starting with a paper in 2002 that described how to collect and merge data from two brain scanners simultaneously as two people played a competitive game. This enabled researchers to observe how both brains were activated in response to each other. In a Science paper in 2005, this “hyperscanning” technique showed correlations of activity in two people’s brains when they played a game based on trust.

In 2010, Dr. Dumas used scalp electrodes to find that when two people spontaneously imitated each other’s hand movements, their brains showed coupled wave patterns. Importantly, there was no external metronome — like music or a turn-taking game — that spurred the pairs to “tune in” to each other; it happened naturally in the course of their social interaction.

“There’s no telepathy or spooky thing at play,” Dr. Dumas said. Interacting with someone else is complicated, requiring an ongoing feedback loop of attention, prediction and reaction. It makes sense that the brain would have some way of mapping both sides of that interaction — your behaviors as well as the other person’s — simultaneously, although scientists still know very little about how that happens.

Later research showed that brain synchrony depended on the social relationship of the two people. Strangers and couples seem to have differing levels of brain synchrony, for instance. Another study found greater brain synchrony between a leader and a follower than between two followers. 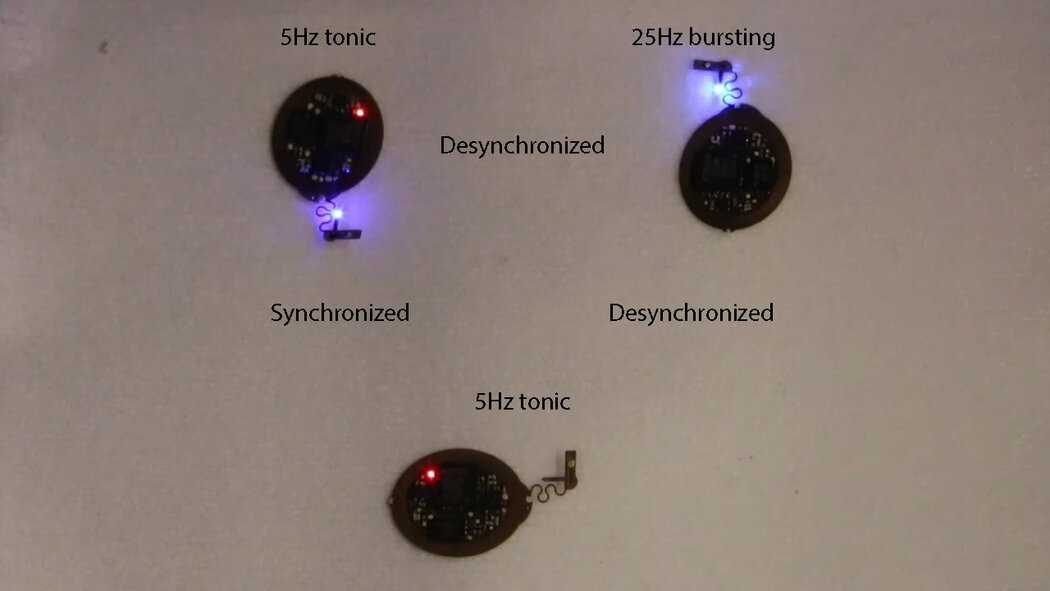 A test of the devices showing synchronized and desynchronized signals.CreditNorthwestern University

Weizhe Hong didn’t know about any of these human studies when, a few years ago, his team stumbled upon the same sort of synchrony while recording from brain cells of interacting mice. “For about six months, we were very puzzled by it,” said Dr. Hong, a neuroscientist at the University of California Los Angeles. “I just found it too good to be true, too surprising to me.”

In most social interactions, after all, the two interacting animals aren’t doing the same thing at the same time; in a conversation, one person may listen while the other talks. So it did not immediately make sense to him why his mice would show such robust neural synchrony. But after digging into the scientific literature, he said, “I realized, oh actually, there’s 15 years of history of studying human synchrony.”

In their experiments, Dr. Hong’s team recorded this synchrony in a part of the brain called the medial prefrontal cortex, which had been linked to a range of social behaviors. Certain neurons in each animal’s brain seemed to encode the animal’s own behavior, whereas other cells’ activity correlated with the behavior of the other animal. There was some overlap between the two groups, suggesting that certain cells were responsive to both animals. These findings could be related to previous studies of “mirror neurons,” which fire when an animal acts or when it observes that action in another animal, although that link is far from clear, Dr. Hong said. “Whether they’re mirror neurons or not is definitely something we’re very interested in,” he added.

When his team went to the large Society for Neuroscience meeting to share their preliminary mouse data, in 2018, they discovered that scientists from the University of California, Berkeley, had found stunningly similar results in socially interacting bats. The mouse and bat studies were both published in Cell in 2019.

“We were amazed and encouraged,” Dr. Hong said. “This hadn’t been done for years, and now somebody else did it in another species.” 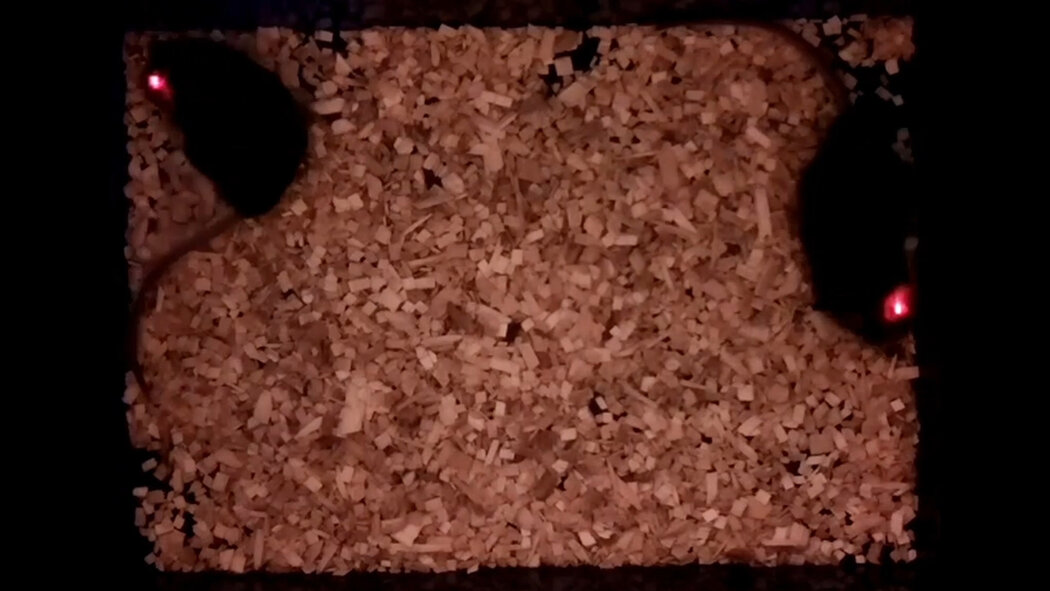 When the signals were issued at a different frequencies, the mice showed far less interest in one another.CreditNorthwestern University

The Northwestern researchers who carried out the new study in Nature Neuroscience were familiar with these human and animal experiments on interbrain synchrony. “It seemed interesting and a little bit strange,” Dr. Kozorovitskiy said. She thought the phenomenon could be further probed with a new tool they had developed to manipulate the brains — and activities — of animals.

Their tool involves optogenetics, a technique that uses a tiny LED light, implanted into an animal’s brain, to activate discrete groups of neurons. (A gene that encodes a light-sensitive protein derived from algae is first inserted into the neurons of interest, to make them responsive.)

But studying social behavior with optogenetics had historically been difficult because the light source was typically attached to the animal’s head through fiber-optic cables, which interfered with the animal’s normal behavior. So John Rogers, a biomedical engineer at Northwestern who specializes in bioelectronics, developed tiny wireless devices that, once implanted, can be controlled remotely by a nearby computer.

“Because everything is implanted, mice can behave naturally and they can socially interact with one another naturally,” Dr. Rogers said. “You don’t have the cables that get tangled up, and there’s no head-mounted gear” for the mice to gnaw on.

The tool also allowed researchers to independently control multiple devices — and multiple animals — at once. Dr. Rogers and Dr. Kozorovitskiy began looking for a way to test it. Dr. Kozorovitskiy had seen the Cell study showing that interacting mice produce synchronies in the medial prefrontal cortex. Perhaps, she thought, the optogenetic device could test the converse relationship: If two animals’ brains were synchronized, would the animals become more social?

The answer, as Mr. Wu discovered that late night last spring, was yes. The results may suggest that brain synchrony is a causal driver of social behavior — and is more than just a byproduct of brains performing similar activities, or thinking similar thoughts, in a shared environment.

But many more experiments will be needed before scientists can reach that conclusion with confidence. Almost all of the data in people, too, is ambiguous: Neural synchrony seems to be tightly linked with behavior, but that doesn’t mean it is the root cause. That uncertainty has led many researchers to wonder whether synchrony really matters.

“There is an overwhelming amount of evidence that we synchronize our behaviors and physiological rhythms spontaneously, and when we do so, we cooperate more and like each other better,” said Ivana Konvalinka, a cognitive scientist at the Technical University of Denmark who studies two-person neuroscience. But, she said, “despite working within this field, I am still not entirely convinced that the fact that our brains sync up has any functional significance at all.”

And yet, if brain-to-brain synchrony does turn out to be a real driver of social interaction, it could have some meaningful applications for people who struggle with social anxiety disorders, for example. Several noninvasive techniques, like transcranial magnetic stimulation, can stimulate people’s brain activity and are being tested as treatments for a range of psychiatric disorders.

“I don’t want to be too prescriptive or fantastical about it, but the human sociality spectrum is very broad, and there’s probably a subset of people who wouldn’t mind if it was possible to influence their level of sociality,” Dr. Kozorovitskiy said, pointing out that many of us already do this every time we meet friends at a bar.

Still, she said, “we cannot even start thinking about those kinds of experiments in clinical context until we understand much more about what’s happening.”

New study finds the more people interact with sharks the…

Advocacy, Inclusion, and Options: Q & A with ALSC…