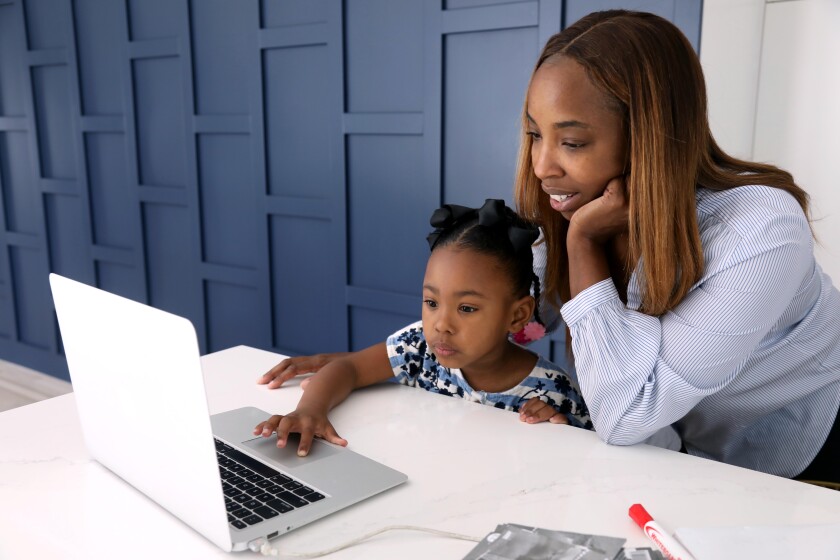 Cali Corbin, 5, a kindergartner at Westwood Charter School, works on a mathematical exercise under the watchful eye of her mother Renee Bailey in their home in Los Angeles on April 9. (Genaro Molina / Los Angeles Times) Share Close extra sharing options

Some parents of Black Los Angeles school students opted to keep their children in distance learning after schools reopened in April because they wanted to shield them from inequitable and sometimes harsh treatment on campus, according to a report from a local advocacy group.

Among Black parents surveyed, 82% cited COVID-19 as one factor for keeping their children home and 43% said they were concerned about bullying, racism and low academic standards, according to the report by Speak Up, which conducted focus groups, analyzed district data and conducted its own survey.

The survey of 500 L.A. Unified parents — 96 of whom were black — asked parents about their children’s academic experiences during the pandemic. The opinions expressed by Black parents added new insights into the low return-to-school rates this spring in the nation’s second-largest school district.

The perils of parenting through a pandemic

What’s going on with school? What do kids need? Get 8 to 3, a newsletter dedicated to the questions that keep California families up at night.

Speak Up’s survey respondents roughly match district demographics. Additional Black parents were then surveyed to take a closer look at themes that emerged from focus groups that Speak Up conducted with Black students in 2020. The survey was conducted March 18 to 23.

Participants were recruited by Facebook ads that targeted parents who lived in L.A. and were screened to exclude those who did not identify as LAUSD parents. The survey was conducted by Goodwin Simon Strategic Research and has a margin of error of 4.5 percentage points for the entire survey, the report said.

“Black parents were able to see how their children were treated by their peers and instructors while kids learned at home, and in some cases, saw a system that did not benefit them,” the report said. “Many of the same parents who saw that their children seemed to learn better and thrive emotionally away from school now question whether it is in their child’s best interest to return to campus.”

National polls have found that Black and Latino parents — whose communities have been disproportionately hit by COVID-19 — were far more likely than white parents to keep their children in distance learning when schools reopened.

“This loss of faith in the public school system will have long-term repercussions,” the report said. “The only way to undo the damage of the pandemic is to dramatically reimagine how the public schools system serves its Black students.”

Speak Up is calling for LAUSD to dedicate more time and resources to the needs of Black students, who have continued to achieve lower rates of academic success in LAUSD and across the U.S. when compared with their peers.

School board President Kelly Gonez said it is a district priority to ensure “our Black students and families are safe, welcomed, and supported on campus.”

“While the survey had a small sample compared to the full Black student population, even a single student experiencing bullying or racism in L.A. Unified is unacceptable,” she said.

The survey also asked about general satisfaction with distance learning. On this parameter, 72% of Black parents and 66% of Latino parents agreed that they were satisfied with how distance learning was working for their child, compared with 36% of white parents.

In February, the district announced that $36.5 million — with $25 million from diverted school police funds and the remaining $11.5 million from next school year’s general fund budget — will go toward an achievement plan for Black students.

Most of that money will fund the hiring of school climate coaches and other support staff, such as school nurses and counselors. The coaches will be responsible for applying de-escalation strategies for conflict resolution, eliminating racial disparities in school discipline practices and addressing implicit bias. A restorative justice advisor will also be placed at 53 schools where more than 200 Black students are enrolled.

“We have seen the district implement multiple initiatives to address Black student achievement in the past, but without true accountability that authentically acknowledges and incorporates the voices of Black parents and their experiences, these measures have been meaningless,” she said. “The needle has not moved.”

L.A. Unified board member Tanya Ortiz Franklin, who represents neighborhoods including parts of South L.A. and Watts, said the district must develop a strategic and inclusive approach to support the academic achievement of Black students.

“This report reminds us that we are not just recovering from 15 months of a global health pandemic, but also from over 400 years of neglect, abuse and mistreatment,” Franklin said. “This coming school year, particularly with the additional relief dollars, is an important opportunity to collectively plan, act, reflect, and serve in truly anti-racist ways that result in transformational outcomes for our Black scholars in L.A. Unified.”

Black parents surveyed by Speak Up said they felt they had to advocate more persistently for their children than white parents.

Michelle Tillett, whose daughter is a second-grader at Birdielee V. Bright Elementary in South L.A., said that when her older son was a middle schooler at Audubon Middle School, he had a semester-long substitute for his algebra class who “just didn’t want to teach Black kids.”

“I wanted my voice to be heard, I wanted my son to learn math. I knew it was a critical subject,” Tillett said in an interview with The Times. The mother of three took several days off from work to speak to school administrators about the issue. She also drove her son to math enrichment programs in West L.A. to help him catch up.

So when Tillett was able to monitor what and how her daughter was learning over Zoom, she saw it as an opportunity to have greater agency over her daughter’s education.

“I was worried about distance learning at first, but I now see that it’s very beneficial to have her at home because I am able to see what’s taking place in the classroom, and whether or not the curriculum is set up to benefit her as an African American student,” said Tillett, who now works remotely half the time so she can stay at home with her daughter.

Surveyed Black parents also said that some LAUSD teachers and administrators could not communicate effectively with them or their students — they often felt like their kids were automatically seen as guilty in any student conflict, according to the report.

“I think LAUSD has taken some steps over the last 15 months … to try to be more intentional about how it can best support black students and families,” Howard said. “But I think more needs to be done structurally, and the data bear this out.”

A 2021 report by the UCLA Center for the Transformation of Schools found that Black students with learning disabilities are two to 10 times more likely to be suspended than the overall suspension rate in the county across 13 of the 14 school districts studied in L.A. County, reflecting national trends of high rates of punitive treatment of Black students.

Jan Williams, the parent of a student at Dorsey High School, agreed with what the survey found.

“The report is right about its most basic finding, which is that Black students face a great deal of institutional racism at LAUSD,” said Williams, a leader in Reclaim Our Schools LA, a teachers-union-backed coalition that includes parents and other local organizations. In addition to investing in Black student achievement, Williams also called for eliminating school police as part of any systemic effort to improve the fate of Black students.

Speak Up, which has had funding from union opponents, and the Reclaim group have often been at odds over education issues, including when it was safe to reopen campuses.

Patterns in brain activity can identify who will struggle to…

Mammals can use their intestines to breathe

The Mystery Deepens Over Why The Lost City of Cahokia Was…