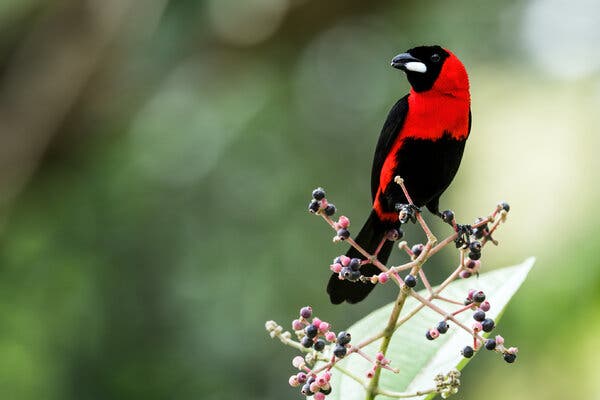 To achieve this flashiness, the birds must spend time and energy foraging for, and metabolizing, plants that contain special color pigments, which make their way into the feathers. A vibrantly colored male is thus sending an “honest signal,” many scientists have long theorized: He is alerting nearby females that he has a good diet, is in good health and would make a worthy mate.

But some birds may be guilty of false advertising, a new study suggests. Male tanagers have microstructures in their feathers that enhance their colors, researchers reported Wednesday in the journal Scientific Reports. These microstructures, like evolution’s own Instagram filters, may make the males seem as if they are more attractive than they truly are.

“Many male birds are colorful not just because they’re honestly signaling their quality, but because they’re trying to get chosen,” said Dakota McCoy, a doctoral student at Harvard University who conducted the research as part of her dissertation. “This is basically experimental evidence that whenever there’s a high-stakes test in life, it’s worth your while to cheat a little bit.”

The new study is an important contribution to the longstanding debate over how, and why, brightly colored feathers evolved in birds, said Geoffrey Hill, an ornithologist and evolutionary ecologist at Auburn University. “Scientists have spent the last 150 years since Darwin and Wallace trying to understand ornaments in animals and especially colors in birds,” he said. “And this is the kind of original approach that helps us.”

Tanagers, like many other birds, owe their red, yellow and orange hues, in part, to a group of pigments known as carotenoids, which they cannot make themselves and must find in the wild. Metabolizing the pigments requires physiological processes that a bird can’t fudge. To put the pigments to use, birds “have to be healthy at a cellular level,” Dr. Hill said. 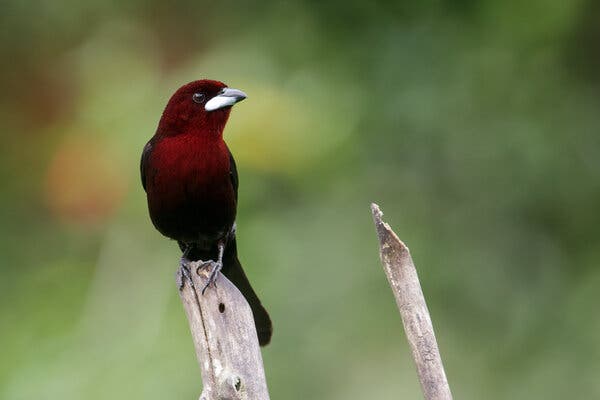 Researchers have found, for instance, that many birds with vivid carotenoid-based colors, and higher carotenoid levels, have better metabolic function than their more muted peers. As a result, carotenoid-colored feathers are often considered an honest signal — one that truthfully communicates a bird’s good physiological condition.

“By this theory, a bright red bird is basically shouting, ‘Look how healthy I am,’ ‘My immune system is working,’ or ‘My metabolism is working,’ or ‘I’m so healthy that I’m able to invest pigments into my feathers,’” Ms. McCoy said. “This study was our attempt to say, well, is that true? Or have males found a clever way to cheat a little bit in the game of life?”

For the new study, Ms. McCoy and her colleagues studied 20 specimens — one male and one female from each of 10 different tanager species or subspecies — in the ornithology collection at the Harvard Museum of Comparative Zoology.

Female tanagers are generally much duller than their male counterparts, an observation that the researchers confirmed with a spectrophotometer, which measures how much light reflects off a surface. The males, they found, had both darker blacks and more saturated colors than females.

They were surprised, then, when they extracted some of the carotenoid pigments from each specimen. Despite their obvious differences in appearance, males and females had roughly similar amounts and types of carotenoid pigments. “I was shocked,” Ms. McCoy said.

But a key difference emerged when they put the feathers under a high-powered microscope. The feathers of female birds were relatively simple, with cylindrical barbs emerging from the feather’s central shaft. Smaller, thinner filaments, known as barbules, branched straight off each of these barbs.

Feathers from male birds, however, had much more elaborate microstructures, with barbs and barbules that were abnormally flat, wide or oblong, or that jutted out at odd angles.

The researchers then used optical modeling software to simulate how light interacted with these unusual feather structures. The microstructures had significant optical effects, they found.

The wider, more oblong barbs that were common in males, for instance, helped focus the light that hit the feather. “It acts as kind of like a lens, and means that more light is interacting with the pigment inside the feather,” Ms. McCoy said.

Together, the various microstructures make the blacks appear darker and the colors appear richer and more saturated, the researchers found.

“It’s a fascinating work on this understudied area of plumage,” said Richard Prum, an ornithologist and evolutionary biologist at Yale University. “Very few people are diving in and analyzing it at this scale, and that’s a really exciting thing.”

Although data are sparse, some research suggests that the microstructural features of feathers are not linked to an individual bird’s current condition.

“What makes the logic of honest work is that the trait is not merely itself, but that its appearance or its perceivable qualities are correlated with some other measure of quality and health condition,” Dr. Prum said. But there’s no obvious reason “having the barbules at this angle or that angle” would be linked to an individual bird’s quality, he said.

That means that the microstructures may have evolved as a “cheap way” for male tanagers to enhance their appearance, Ms. McCoy said. “But as with all things in science, we need some more careful research to be sure that that’s true.”

The findings don’t mean that there is no link between color and quality — just that the microstructures muddy that connection a bit, in a way that could allow mediocre males to seem like standout mates.

“Honest signaling is a key concept in animal behavior, but it’s important to keep thinking about how these traits will evolve,” Dr. Hill said. “Evolution may find ways to erode the honesty of a signal.”

And as for human males? Ms. McCoy cautions against extrapolating too much from other species.

“This is a study of birds,” she said. “You can’t just claim evolutionary reasons for human behavior without thinking really carefully. That being said, I think we all have probably had experiences where, whether it’s in the game of love, or getting grades, or playing a game or trying to pass fuel standards with your car as a company — people are constantly gaming the system and trying to appear a little bit better than they are.”

In what is hailed as a conservation success story, bald eagle numbers have soared

What is the Paris climate agreement and why did the US…