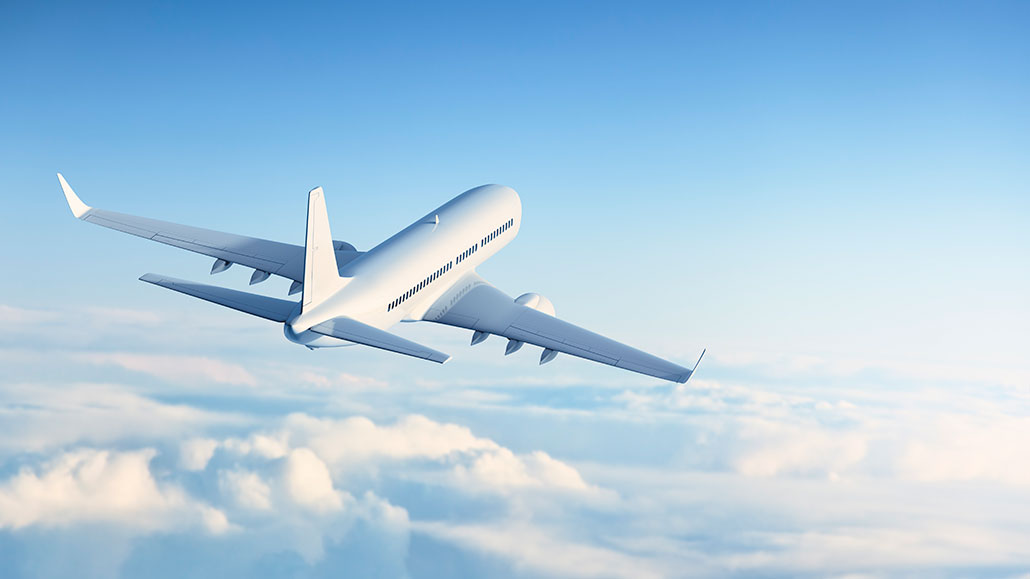 Flying someone one-way from London, England, to New York City produces nearly a ton of carbon dioxide. That’s a lot of this climate-warming greenhouse gas. In some countries, few people do enough in a whole year to emit that much CO2. But there are ways to cut the climate impact of flying. One new innovation: Ask planes to surf high-altitude winds every chance they get.

It’s not something they’ve been allowed to do. But that may change — and soon.

Explainer: CO2 and other greenhouse gases

Most jets crossing the Atlantic Ocean follow one of several fixed paths that are widely spaced. The reason: Radar had not been able to track aircraft everywhere above the Atlantic. But a new network of satellites in low-Earth orbit could soon change that. They’ll allow people to track these flights throughout their route.

“Instead of having to have these fixed tracks which keep the planes apart, airlines can fly much more flexible routes,” says Cathie Wells. She is a PhD student in mathematics who led the analysis. She works at the University of Reading in England.

Wells was part of a team in England that calculated the fastest possible routes for passenger planes. They used computer algorithms, sets of stepwise instructions that help solve mathematical problems. Travel time varies with the winds that a plane encounters. For instance, eastbound flights can get a powerful boost from the vigorous jet stream. That’s a strong current of air flowing from west to east across the Atlantic. Westbound routes miss that benefit. But they could avoid unfavorable headwinds that would otherwise lengthen a trip. Faster flights burn less fuel. And less burning emits fewer greenhouse gases.

Explainer: What is an algorithm?

For its new study, the team analyzed 35,000 eastbound and westbound flights between New York’s Kennedy airport and Heathrow airport in London. Jet streams vary a lot in winter, sometimes reaching speeds of more than 320 kilometers (200 miles) per hour. This means that optimal flight times would tend to vary more at this time of year. So the new study looked at all flights that took place over three months, starting on December 1, 2019.

On average, routes making the best use of wind assists would have taken less time than the actual flights did, the group showed. One particular eastbound flight could have saved one-sixth of the fuel it actually burned.

Wells and her team published its findings January 26 in Environmental Research Letters.

Change may be on the way

The aviation industry knows it has a high “carbon footprint.” That’s a measure of the greenhouse gases it spews. There are ways to shrink that footprint, but most are costly and would take a lot of time. For instance, jet manufacturers could redesign their planes. Or airlines could switch to fuels made from renewable sources, such as plants. Some researchers are even designing and testing hybrid-electric and hydrogen-powered planes.

But it takes decades and many billions of dollars to design, test and fly new fleets of planes. Changing a flight path, in contrast, can cut costs and energy right away. “Reducing fuel [use] is a win-win,” says Irene Dedoussi. It allows the aviation industry to “save money on fuel while reducing emissions.” Dedoussi works at Delft University of Technology in the Netherlands. Even savings of just one or two percent is generally considered important, this aerospace engineer says. Using something so simple to cut fuel use by a sixth is huge, she says.

The new study doesn’t show how well such wind surfing would work for all planes, in all skies and the world over. But it does suggest that making flight routes more flexible could cut both fuel use and CO2 in some places.

Before that can happen, however, the algorithm this study used may need a few tweaks. And if flight times vary depending on the wind, scheduling connecting flights and managing runways and gates would become more complicated. The researchers would have to work out the best flight paths that take such scheduling issues into consideration. They also may want to see if flying at different altitudes gives them a wider choice of flexible routes at the times most people want to fly.

National Air Traffic Services (NATS) provides air-traffic control for the United Kingdom. It invited Wells to describe her new findings to them. Just one week after her team’s new study was published, NATS said it would temporarily disband its flight-paths system. For now, they will be working with airlines and their Canadian counterpart (NAV CANADA) to allow airlines to choose routes that would best limit their fuel use.

“This is a very exciting new twist,” says Wells.

This is one in a series presenting news on technology and innovation, made possible with generous support from the Lemelson Foundation.

These Ants Shrink Their Brains for a Chance to Become Queen

NASA Is Sending a Human Model Into Space

Grumpy Dogs Outperform the Friendlies on Some Learning Tests