Taiwan is taking serious steps to deal with its worst drought in 56 years. The extreme dry weather has left many farmers unable to grow crops and is threatening many other businesses in the country.

Taiwan’s Weather
Taiwan is normally a pretty wet place. It gets a lot of rain at different times of the year, especially in its two monsoon seasons. It also gets a lot of rain from the three to four typhoons that usually hit it every year. Though typhoons can be dangerous, they also bring much-needed rain.

Last year, Taiwan had very little rain and it wasn’t hit by a single typhoon. That has left the island nation struggling with its worst drought in at least 56 years.

Lakes and rivers in the central and southern part of the country are drying up. Many of the country’s reservoirs are only 20% full. Some, like the Baoshan No. 2 Reservoir, are less than 10% full.

In response to the shortage, the government has been limiting water. For example, people in the central city of Taichung only get water five days a week. For the other two days, they use water stored in buckets or bathtubs. Some businesses that use a lot of water, like swimming pools and car washes, have been forced to shut down.

The drought has forced the government to choose between the country’s two biggest users of water: farmers, and companies that make computer chips. The government has chosen to support the chip makers.

Normally, Taiwan’s farmers use about 70% of the country’s water irrigating their crops. This year, the government has prevented many farmers from growing crops at all, stopping irrigation on 286 square miles (741 square kilometers) of farmland. The government is paying the farmers for their lost business, but many farmers are still upset. 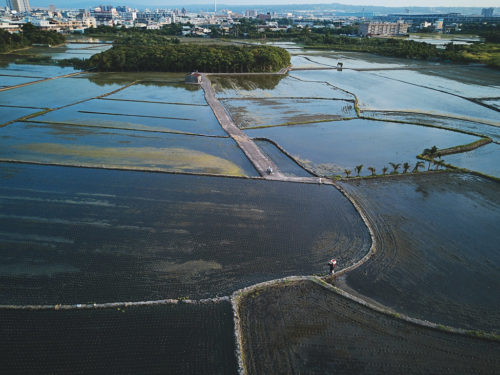 Instead, the government is trying to make sure the country’s computer chip makers have enough water to stay in business. Computer chips, also called microprocessors, are used in all kinds of electronic devices, from smartphones, to microwaves, to cars. Taiwan makes most of the world’s computer chips and the business is incredibly important for the country.

But chip makers also require huge amounts of water. The government is limiting water supplies to chip makers, but not shutting them down. As a result, chip makers are taking steps to use water more carefully. TSMC, the world’s largest chip maker, says it recycles 86% of its water.

The government is also trying to create more water. It has built a factory to turn sea water into drinkable water, and is drilling many new wells. The government has also sprayed chemicals in the clouds to try to bring rain. It even held a special religious ceremony to pray for rain.

Some people say the government hasn’t managed Taiwan’s water wisely. Experts say the country loses too much water to leaking pipes. Many people believe that Taiwan needs to charge more money for water so that people don’t waste it.

But the problem is also partly caused by climate change.  The amount of rain that Taiwan gets has been dropping steadily since the 1960s.

Many people are hoping that Taiwan’s normal summer monsoons will begin in May and will end the drought. But it’s clear that Taiwan will also need to think carefully about how to solve its water problems for the future.

Did You Know…?
Taiwan is expected to get some rain this week. Though the rain will help a little, it’s not nearly enough to solve the problems caused by Taiwan’s drought.

Could “Fools’ Gold” have helped build the first proteins?

Heaviest moth in the world found at primary school