The Birds and the Buoys: Using Googly Eyes to Avert Extinction 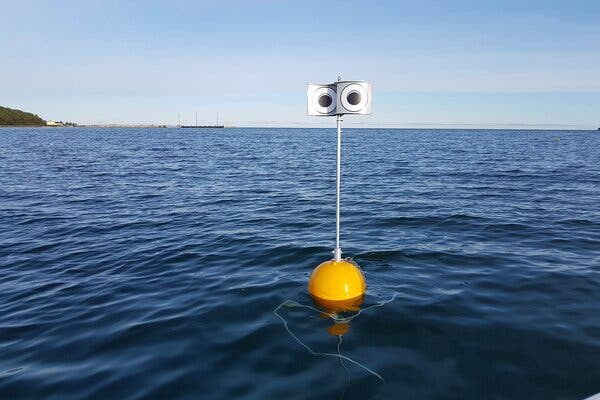 Every day, thousands of hooks and nets meant for fish end up catching seabirds — a global problem that is pushing many seabird species to the brink of extinction. But no fishing gear may do more damage than the gillnet, which entangles and kills at least 400,000 seabirds each year.

What if all it took to save them was a pair of googly eyes?

It’s not quite that simple, but a team of scientists, conservationists and engineers are developing a device that has the potential to save many seabirds from gillnets. This device, known as the looming-eyes buoy, is essentially a floating scarecrow.

A prototype was recently tested on long-tailed ducks in Küdema Bay in Estonia. The results of this study, published on Wednesday in the journal Royal Society Open Science, suggest that looming-eyes buoys can reduce the number of seabirds by up to 30 percent within a 165-foot radius. Although the looming-eyes buoy won’t completely solve the problem, it’s a step in the right direction, experts say.

Preventing albatross, petrels, gannets, boobies and other seabirds from being caught in gillnets is not easy. The smell of a gillnet loaded with fish can attract seabirds from miles away. And when these birds dive into the water to get what they thought was a free meal, they can become entangled in the gillnet and drown.

In 2018, conservationists from BirdLife International, a conservation organization, began brainstorming ways to prevent such occurrences.

“We thought that if we could prevent vulnerable seabirds from diving too close to the gillnets in the first place, we might be able to finally tackle bycatch significantly,” said Yann Rouxel, a project officer at BirdLife International and lead author of the new study. That’s when Mr. Rouxel and his team came up with the idea for a marine scarecrow.

He and his colleagues shared their idea with scientists from the Estonian Ornithological Society and engineers from Fishtek Marine, a company that makes fishing equipment, and just over a year later the looming-eyes buoy was born. 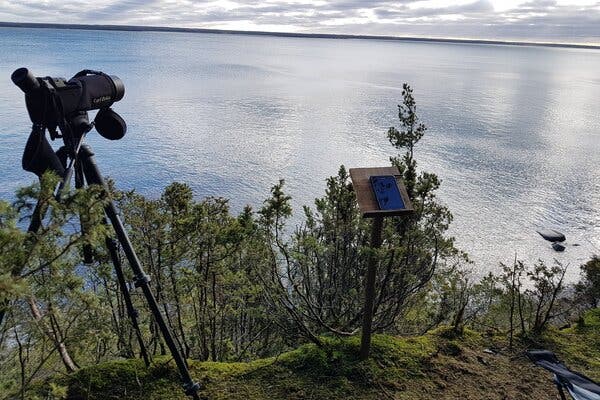 A field work station for observing the deployed buoys. The team found that the buoys reduced the number of long-tailed ducks within a 165-foot radius by 20 percent to 30 percent compared with traditional buoys.Andres Kalamees

Much like the scarecrows that line cornfields or the plastic owls that sit atop office buildings, the looming-eyes buoy deters birds through intimidation. The large, rotating eye spots that sit atop the bobbing buoy are designed to resemble the staring eyes of a large predator.

Last year, the researchers behind the looming-eyes buoy placed several prototypes in Küdema Bay to see whether they could effectively deter the local long-tailed ducks. After 250 hours of observation, the team found that the presence of the bug-eyed buoys reduced the number of long-tailed ducks within a 165-foot radius by 20 percent to 30 percent compared with traditional buoys.

“If we put ourselves in the place of the diving birds, it is not surprising that large staring eyes at the surface of the water may dissuade them from coming near, mimicking the gaze of a potential predator,” said Brendan Godley, a professor of conservation science at the University of Exeter in England.

“It is an excellent example of the kind of innovation that needs to be encouraged,” said Dr. Godley, who was not involved in the study.

The researchers also found that long-tailed ducks returned to the areas they had vacated once the looming-eyes buoys were removed, suggesting that the buoys’ effects were not permanent.

Although the prototype showed promise, more research and development are needed.

“Our previous prototype worked great, but it is currently too heavy and large to be used” in gillnet fisheries, Mr. Rouxel said.

The researchers plan on testing a smaller and lighter version in the Icelandic lumpfish fishery soon.

If successful, these devices could be used to reduce seabird bycatch in small- and large-scale gillnet fisheries around the world. However, the looming-eyes buoy is far from a panacea to save seabirds from fishing gear. The extent of seabird bycatch is probably underreported and not fully understood, and the problem won’t be solved by technical solutions with googly eyes alone.

“It is unlikely that a silver-bullet solution exists, though,” Mr. Rouxel said, “so a toolbox of measures is probably our best option.”

Juliet, the last wild macaw in Rio, is lonely and looking for her Romeo