These Ants Shrink Their Brains for a Chance to Become Queen 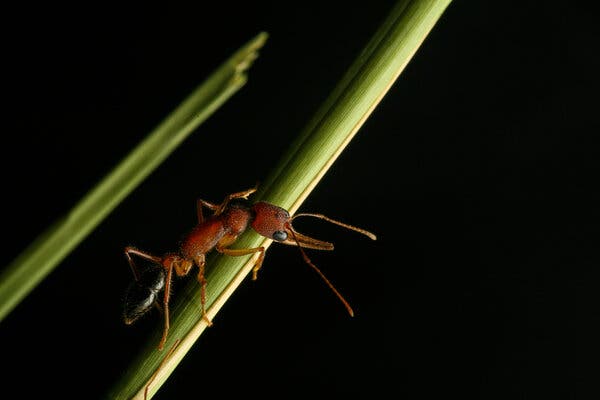 Indian jumping ants can leap high, take out prey and economize the size of their brains.Clint Penick

The Indian jumping ant, Harpegnathos saltator, has many talents. This inch-long arthropod, found in flood plains across India, has a four-inch vertical leap and the ability to take down prey nearly twice its size. If that wasn’t enough, these amazing ants can also adjust the size of their own brains.

In a study, published Wednesday in the journal Proceedings of the Royal Society B, scientists found that Indian jumping ants can shrink their brains by nearly 20 percent and unshrink them in a matter of weeks. Although other insects, including honeybees, have been known to possess the ability to increase their brain size, the Indian jumping ant is the first insect known to be capable of both increases and decreases in brain size. The researchers behind the study say that females of the ant species use this ability to prepare their bodies for reproduction.

Like most ant colonies, those of Indian jumping ants consist of a queen, males for reproduction and an all-female worker class. The queen holds the most coveted position in the colony. Not only do queens get waited on hand and foot by worker ants, but they also live more than five times longer. And in a typical colony, the queen is the only female that is allowed to have offspring.

For most species of ant, queens are born, not made. However, Indian jumping ants are a species that allow worker ants to compete for a chance to become royalty.

When a queen Indian jumping ant dies, about 70 percent of the females in her colony enter a battle royale-style tournament that lasts up to 40 days where competitors beat one another with their antennae until a group of five to 10 victors emerges. These victors get to spend the rest of their days doing nothing but pumping out babies. 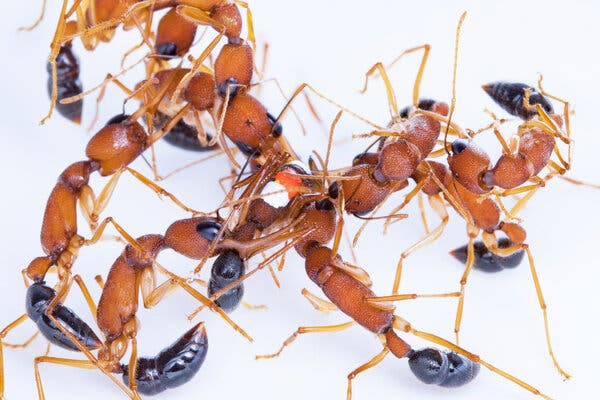 While in other ant species’ colonies, queens are born, Indian jumping ants fight for a chance at motherhood.Clint Penick

As soon as the tournament begins, hormones drive the competitors to undergo an intense physiological transformation that turns them into reproductive queenlike ants, called gamergates. Although worker ants and gamergates are similar in size, their internal anatomy is vastly different.

“If you look inside their bodies, you can see the huge transformations that they undergo,” said Clint Penick, assistant professor of biology at Kennesaw State University in Georgia and lead author of the new study.

Dr. Penick and his colleagues compared the internal anatomy of workers and gamergates and found that becoming a gamergate not only caused worker ants’ ovaries to balloon to five times their normal size, but it also caused their brains to shrink by roughly 20 percent.

The researchers then used laser-assisted imaging technology to study the brains of gamergates and found that, during their transformations, their optical lobes experienced the greatest degree of shrinkage. Dr. Penick attributes this to the fact that gamergates don’t need good eyesight in their underground nests.

“They live in complete darkness, so there’s no reason for them to maintain the ability to process visual signals,” Dr. Penick said.

Workers that transformed into gamergates also experienced significant shrinkage of their central brain. Dr. Penick believes this is because the gamergates don’t have to perform cognitively difficult tasks, such as finding food and defending the nest from predators.

“Worker ants need a large brain to deal with these cognitive tasks, but gamergates don’t need to think that much,” he said. “Once they win the tournament, they become little more than egg-laying machines.”

The researchers believe that these ants shrink their brains to conserve energy, a behavior also observed in Etruscan shrews, a tiny mammal that sheds brain size in winter to keep other parts of its body warm. It then regrows its noodle in the spring.

“The brain is a costly organ to operate,” said James Traniello, a professor of biology at Boston University who was not involved with the study. “It demands a lot of energy.”

Dr. Traniello, who studies brain evolution in other ant species, believes that when female Indian jumping ants transform into gamergates, most of the energy that was once spent on the brain gets diverted to parts of the body that are responsible for reproduction.

To see if this reallocation of resources was reversible, Dr. Penick and his colleagues collected several newly transformed gamergates and isolated them from their colonies.

“I thought they would probably just die, but within a couple of days they completely switched back,” Dr. Penick said. “It was pretty amazing to see that they were able to completely re-expand their brains to the exact same size that they were before.”

The researchers suspect that the ability to switch between worker and gamergate likely evolved as a means of ensuring that those that fail in their bids to be queen can go back to their previous role of maintaining the colony.

“This species shows an incredible amount of plasticity, both at the larval stage and the adult stage,” Dr. Penick said. “And for that reason, they can be a model for understanding things like epigenetics and the control of plasticity in organisms, even scaling up to humans.”

$5,000 reward offered for information in case of pelicans…

Rats reappear on Lord Howe Island for the first time since…