These Brittle Stars Have Thousands of ‘Pig Snouts’ on Each Arm 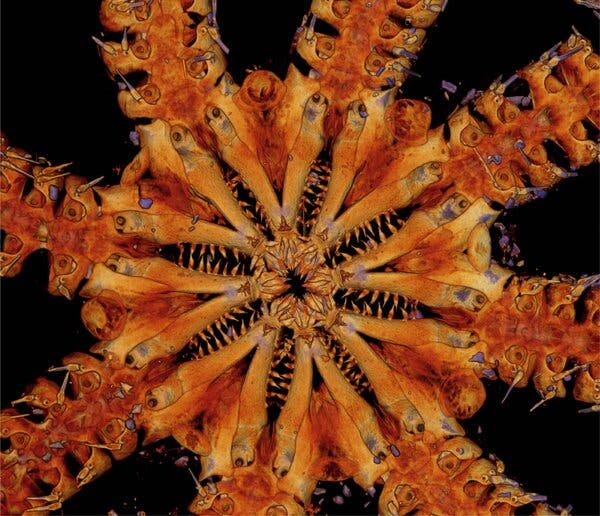 Eight arms, and a whole lot of teeth on a sea creature with a lineage stretching back to the Jurassic Era.Jay Black/University of Melbourne

In theory, Tim O’Hara had come to Paris to map the biodiversity of a faraway seamount. In practice, this meant sifting a plastic barrel of preserved brittle stars floating in 95 percent ethanol.

For weeks, he sorted through common, five-armed species of echinoderms that are related to starfish, many of which he’d seen before. “You get humdrum things,” said Dr. O’Hara, a senior curator at Museums Victoria in Australia.

One specimen Dr. O’Hara scooped from the bucket looked unlike any brittle star he’d seen before. It had a thorny nest of teeth and, quite peculiarly, eight arms. “Brittle stars always have five, a few have six, and the very odd one has more than 10,” he said. “To suddenly have eight arms? That was special.”

Dr. O’Hara believes the echinoderm, which was collected on an earlier expedition to a seamount east of New Caledonia in the South Pacific, represents an entirely new family of brittle stars that hails from an ancient lineage dating back to the Jurassic and survives to this day. He and other researchers described the species, Ophiojura exbodi, in a paper published Wednesday in the journal Proceedings of the Royal Society B.

“If I found this thing, I just would have died,” said Christopher Mah, a researcher at the Smithsonian National Museum of Natural History and expert on sea stars, who reviewed the paper. “That thing is all teeth.” 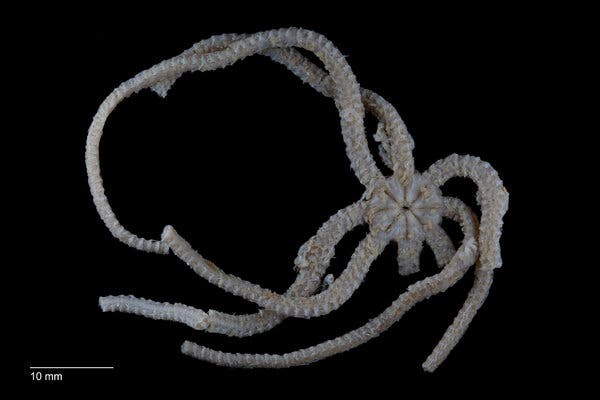 Most brittle stars have five arms, but this species has eight.Caroline Harding/Museums Victoria

After Dr. O’Hara took a genetic sample from the toothy, eight-armed star, he put it in his “weirdo box,” where he stores specimens that puzzle him. A phylogenetic analysis revealed that the star’s singular lineage emerged in the Jurassic or late Triassic, approximately 160 million to 200 million years ago.

“Wow,” Dr. O’Hara remembers thinking. He then called Ben Thuy, his longtime collaborator and a paleontologist at the National Museum of Natural History, Luxembourg, about his eight-armed dilemma. He wanted to know if Dr. Thuy knew of a similarly shaped star in the fossil record. Dr. Thuy responded: “Send me a piece of its arm.”

Dr. O’Hara hand-delivered the arm segment to Luxembourg. Dr. Thuy soaked the specimen in bleach to remove its flesh and coated it in an extremely thin layer of gold to ensure electric conductivity so he could run it under a scanning electron microscope. The scans revealed the brittle star’s arm plates, which join together in a chain to form their internal skeleton; each had a pair of holes, a nerve hole and a muscle attachment hole. Together, the passageways bore an eerie resemblance to a particular set of nostrils.

“Pig snout articulations,” Dr. O’Hara said. “That was our internal joke name, but it’s quite descriptive.”

Each of the arm plates, which together form the brittle star’s internal skeleton, have a pair of holes that are reminiscent of a pig snout.Ben Thuy, Natural History Museum Luxembourg

But Dr. Thuy was stumped. He wracked his brain for other pig-snouted holes he might have seen in the fossil record. Months later and still stumped, he noticed a poster he had long ago hung on the wall of his office. It described some microfossils from the early Jurassic, including arm plates of a fossilized brittle star with the very same snouted openings. “It looked exactly the same,” he said.

With only a preserved specimen, the researchers don’t know how the newly described brittle star uses its proliferation of spine-like teeth, or even what color it was while alive. But they do know this: The brittle star has thousands of pig snouts on each arm, a veritable sty in the benthos.

It is not common taxonomic practice to describe a new species from a single, imperfect specimen. But the researchers’ multiple lines of morphological and phylogenetic evidence offer strong support for their claims, according to Dr. Mah.

“There is no doubt that it is a new species and the genetic analysis suggesting a new family is strong,” Sabine Stöhr, an echinoderm biologist at the Swedish Museum of Natural History who was not involved with the research, wrote in an email.

The researchers do not know the next time an expedition will go to New Caledonia and happen to pick up another specimen of this seemingly rare brittle star. “We felt it was important to come along now and alert people to the fact that this animal exists,” Dr. O’Hara said.

“This could be the last time we find this animal,” Dr. Mah added.

In Dr. O’Hara’s eyes, the deep seamounts east of New Caledonia promise to be a living museum of creatures that have survived since the time of dinosaurs. Here, approximately one to two thousand feet underwater, scientists have found decapod crabs, flowerlike crinoids, nautiluses and other creatures once believed to be extinct, Dr. Thuy said.

“That’s where the ancient things are,” Dr. O’Hara said, shortly after stepping out of the Zoom call for his daily temperature check (no symptoms). He is quarantining in a cabin in Darwin, Australia, until he sets off on an expedition to the ancient seamounts near the Christmas and Cocos Islands in the East Indian Ocean.

“No one’s taken a sample from this area. It’s totally unknown,” he said, adding that he’s hoping to find another weirdo.

Scientists Use Whale Carcasses to Help Answer Mysteries of…

Local lad from Orange named as victim of Friday…

Fish get addicted to meth in polluted rivers, go through…

Miami condo collapse: death toll at 24 as search pauses for…