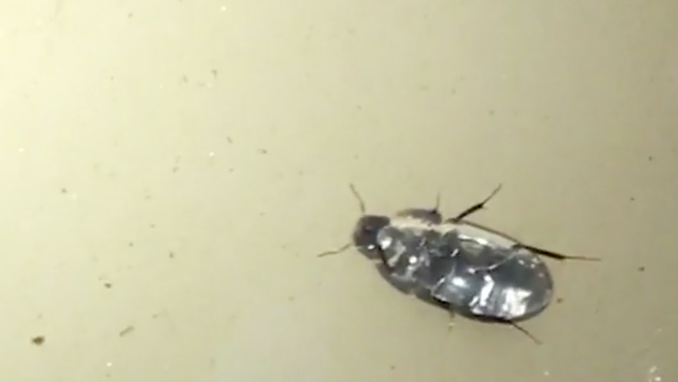 Walking on water is a common enough feat for insects. Water striders, for instance, are famous for exploiting surface tension to achieve it. But a totally surreal video reveals a beetle that has taken an altogether more remarkable step — to the underside of the water’s surface.

The insect, which the researchers who discovered it have proposed comes from the family Hydrophilidae, can scamper along the underside of the water’s surface as if stuck to a pane of crystal-clear glass. It’s the first time an insect has ever been documented moving in such an outlandish fashion.

The beetle’s discovery was made by accident. John Gould, a behavioral biologist at the University of Newcastle in Callaghan, Australia, was searching for tadpoles in a pool of water in Australia’s Watagan Mountains when he saw a small black object moving across the water.

At first, he assumed an insect had fallen into the water and was partaking in some surface swimming. But a second glance revealed that the bizarre bug was attached to the underside of the water’s surface and was scuttling contentedly across it.

“The moment I realised the beetle was moving across the underside of the water’s surface, I knew I had found something truly bizarre,” Gould told Live Science. “The beetle was casually walking along the underside of the water’s surface with ease while upside down. Every now and then, it would come to a stop, and then kept plodding along across the surface as if it was walking across any regular solid surface on land.”

Gould said that the especially fascinating thing about the critter’s strange superpower is that it wasn’t just able to walk, but also rest while seemingly glued to the underside of the water’s surface.

“That means it can remain at the water’s surface without expending any energy,” he said. “This is in contrast to large animals that move across the water’s surface, such as lizards, which need to keep running in order not to sink through the surface. This ability could also mean that it could avert predation by minimizing the amount of noise it makes while remaining still.”

How the fantastical beast is able to physically achieve this feat is unclear, but Gould and his team believe that an important clue may lie in a visible air bubble that is trapped on its upturned belly. The beetle’s body is covered in many tiny, hair-like projections that enable it to capture air, especially on its abdomen and legs. This air could provide an upward, buoyant force that is sufficient to stick the beetle to the water’s surface.

“In addition, we propose that attachment organs on the legs trap air bubbles that allow it to interact with the water’s surface in such a way that it can easily walk without breaking surface tension,” Gould said. “Of course, its small size may also be an attribute that contributes to this ability, as disruption to surface tension is less likely compared to larger insects.”

Further study is needed to find the exact mechanism that enables the insect’s water-walking, as well as the reason for the adaptation. One suggestion is that it could be hanging out at the surface, literally, to avoid ambush predators that lurk at the bottom of pools.

Whatever the answer may be, it will likely provide vital insights for the world beyond the beetle’s small pool — the scientists note that studies of other water-walking insects, such as water striders, have led to advancements in robotic insects that can achieve the same feat.

The researchers published their findings June 28 in the journal Ethology.

Ben Turner is a U.K. based staff writer at Live Science. He covers physics and astronomy, among other topics like weird animals and climate change. He graduated from University College London with a degree in particle physics before training as a journalist. When he’s not writing, Ben enjoys reading literature, playing the guitar and embarrassing himself with chess.

Will anyone ever find Shackleton’s lost ship?

A year of wonderful news at our zoos

Is tax avoidance ethical? Asking on behalf of a few…

Rats reappear on Lord Howe Island for the first time since…