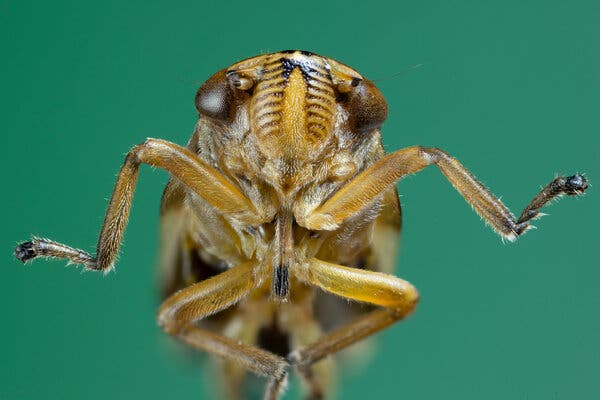 Froghoppers have such suction capability that, according to researchers, if they stood atop the Statue of Liberty, they could drink from a glass of water on the ground if they could find a straw long enough.Philip G. D. Matthews

A meadow froghopper urinates so much that it could drown itself. Luckily, the insect Philaenus spumarius, which is approximately the size of a Tic Tac, has a butt catapult that regularly flicks its globules of liquid waste into the air and safely away from its body.

“At this tiny, tiny scale, ballistics become really complicated,” said Philip G. D. Matthews, an associate professor of comparative physiology in the zoology department at the University of British Columbia. “But they can flick it away pretty far,” he said, clarifying that “pretty far” here means two to four inches.

Among entomologists, the froghoppers’ urinary powers are well understood. But the insects’ suction abilities, which long confounded scientists, have turned out to be much more impressive, according to a paper on the meadow froghoppers’ feeding mechanisms published on Wednesday in Proceedings of the Royal Society B.

Froghoppers are common in Europe and North America and are known to spread certain bacterial diseases among plants. They urinate almost constantly because the insects feed on pure xylem sap, a liquid that is so bereft of nutrients one must sip and sip and sip, sometimes up to 24 hours straight.

Most sap-drinking insects drink phloem, a sugary liquid in plant vessels that is easy to get because it is driven by positive pressure, meaning it gushes forth from a plant stem once pierced by mouthparts. In contrast, xylem is driven by negative pressure — its vessels actually pull inward — which makes the watery liquid excruciatingly difficult to suck out. Such negative pressures exist inside the unbroken columns of xylem vessels where water is pulled up from the roots into the leaves to evaporate into the atmosphere, Dr. Matthews said.

To show the power of the froghoppers’ suction, Dr. Matthews, Elisabeth Bergman, a master’s student he advised, and Emma Green, an undergraduate volunteer, examined the insects’ morphology and tested their metabolic abilities in 2019. Their test subjects hailed from the weeds near their lab.

The researchers took Micro-CT scans of the heads of adult froghoppers and analyzed the morphology of their cibarial pump, a structure in their head that allows them to pull the xylem sap into their face. Like a plunger inside a syringe, a diaphragm is pulled by muscles to increase the volume of the chamber and draw in xylem sap. As froghoppers must rhythmically pull on this diaphragm to suck, the nose-like structure between their eyes, called a post-clypeus, is terrifically strong to accommodate all of that muscle.

“It’s like a huge bicep on their head,” Dr. Matthews said.

This showed the froghoppers were capable of sucking much more than anyone previously believed. If the insects “were on the top of the Statue of Liberty’s torch, they could have a straw going all the way down to the ground going into a glass of water, and they could be quite happily sucking it up,” Dr. Matthews said, adding that the froghoppers would still be fine even yards above the torch.

After calculating the insects’ powerful suction, the researchers wanted to confirm the action didn’t use more energy than it gained. To test this, they placed froghoppers and a length of pea plant in airtight acrylic chambers to measure how much carbon dioxide the insect produced after 30 minutes of slurping sap.

Although the insects appeared still to the human eye, magnified videos of the froghoppers’ faces revealed just how much their face muscles move during feeding.

“All of a sudden, a bug sitting there doing nothing looks like its nose is jiggling around like crazy,” Dr. Matthews said, referring to the froghopper’s post-clypeus.

The pea plant was grown hydroponically, bare roots dangling into a solution of nutrients. This made it easy to swap out the solution for polyethylene glycol, a fluid with even stronger negative pressure than the nutrient solution. Dr. Matthews compared drinking the polyethylene glycol to a cyclist biking up a hill instead of on flat ground. The researchers reasoned the froghoppers would slow down when faced with the even more resistant fluid. But the froghoppers managed to keep up their same sucking velocity, albeit with a rocketing metabolic rate.

Alberto Fereres, an entomologist in Madrid, said the study helped to explain how P. spumarius could feed on plants with “very negative tensions,” such as rain-fed olives and grapevines.

The metabolic measurements demonstrated the insects could gain more energy than they expended even while sucking xylem sap at full throttle. “That’s their existence,” Dr. Matthews said. “Drinking and filtering and peeing and pumping.”

Though this process is extreme on the side of a froghopper, a single sucking bug would most likely be imperceptible to any plant. Unless, of course, there is an infestation, in which case its copious gobs of butt-flung liquid waste can even resemble rain.

‘They got out of hand’: Auckland street wrestles with fate of 400 pet rabbits

These ferns may be first plants known to work together as…

‘Fathom’ Review: A Whale of a Conversation