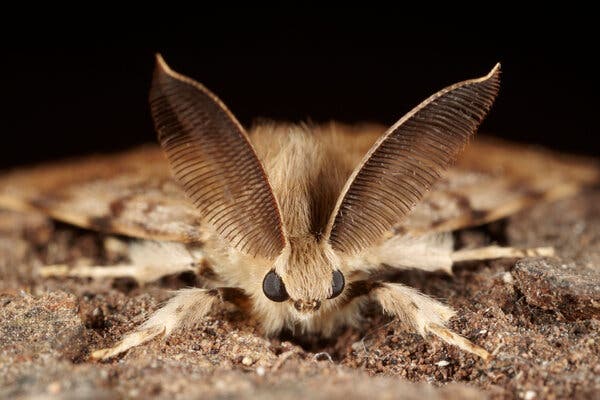 On Wednesday, the Entomological Society of America announced it was removing “gypsy moth” and “gypsy ant” as recognized common names for two insects. For Ethel Brooks, a Romani scholar, the move is long overdue.

As a child in New Hampshire, Dr. Brooks loved watching worms and caterpillars crawl across her hand. But one particular caterpillar, the hairy larvae of the species Lymantria dispar, terrified her. The larvae would swarm and strip the leaves from a tree, leaving behind so much destruction that people sometimes called them a “plague.” But no one blamed L. dispar. Instead they blamed “gypsy moth caterpillars,” the species’ common name.

“That’s how they see us,” Dr. Brooks remembered thinking as a child. “We eat things and destroy things around us.”

Dr. Brooks, now chair of the department of women’s, gender and sexuality studies at Rutgers University in New Jersey, has spoken out against the use of the pejorative in fashion and college parades, she said. But Dr. Brooks never imagined the pejorative could be stricken from its use in the more staid realm of science.

“It’s hideous and super racist and it’s hurtful,” she said. “But what can you do about it?”

The move by the Entomological Society is the first time the group has removed a common name from an insect on the grounds that it is offensive to a community of people, according to representatives from the society.

“If people are feeling excluded because of what we call something, that’s not acceptable,” Michelle Smith, the society’s president, said. “We’re going to make changes to be a welcoming and inclusive society for all entomologists.”

The news of the renaming came as a welcome surprise to many in the scientific community, with some praising the decision on Twitter. “WOO!” tweeted the entomologist Kevin Liam Keegan from his handle @MothPotato.

Though each species has a unique binomial scientific name, such as Lymantria dispar, many are better known by their common names. “No one calls a house fly Musca domestica,” said Chris Stelzig, the executive director of the Entomological Society.

In the 20th century, the Entomological Society of America formally recognized a list of approved common names in an effort to standardize what many insect species were called. The society maintains a committee that reviews proposals and makes recommendations for new or revised common names.

The group was aware that the moth Lymantria dispar’s common name was derogatory, and it received its first formal request to remove the moth’s name from its list in 2020, Mr. Stelzig said. The proposal went to the common names committee, which proposed revising its policies for acceptable common names. The committee also reached out to Romani scholars including Dr. Brooks, Magda Matache and Victoria Rios to hear their thoughts.

In March, the organization’s governing board approved those policies. In June, they elected to remove the pejorative names from the moth and the ant species. “They turned the recommendation around really quickly,” Ms. Smith said.

In the intervening months, staff at the Entomological Society put together the Better Common Names Project, a task force to review and replace offensive or inappropriate insect common names. The project plans to recruit community-driven working groups to propose new names, involving people who study the insects or are from or live in the region where the insects originated, Mr. Stelzig said. The project invites anyone to submit insect common names that should be changed.

In the past few years, many scientific fields have opened up conversations about renaming species with offensive common or scientific names, or even whole publications. In 2020, a scientific journal changed its name from Copeia — a name derived from the racist scientist Edward Cope — to Ichthyology and Herpetology. In 2020, a naming committee of the American Ornithological Society removed the name of a Confederate general from a bird, a proposal the committee initially rejected the year before.

Bird Names for Birds, a campaign to remove all eponymous names — such as Bachman’s sparrow, which is named after a white man who enslaved people — submitted a letter to the American Ornithological Society with more than 2,500 signatures in June 2020. In 2021, the society announced the formation of an ad hoc committee to look into nomenclatures.

Some birders, like Navin Sasikumar in Philadelphia, praised the Entomological Society’s “relatively swift” decision on the moth and ant, and said the group’s five-step process was a commendable way of changing common names.

Though the pejorative “Gypsy” has now been stricken from one entomology group’s records, it still appears in another scientific field: genetics. In February, Dr. Brooks received a message from Kevin Wei, a postdoctoral fellow working with fruit flies at the University of California, Berkeley.

Dr. Wei studies transposable elements, often called “selfish” or jumping genes for their abilities to make copies of themselves and insert them back into the genome. A large family of these jumping genes are commonly called “Gypsy jumping genes,” he said. As he stared at the names of these genes, he kept thinking, This is actually not OK.

“When Kevin reached out, I just found that an incredible act of solidarity,” Dr. Brooks said.

Dr. Brooks, Dr. Wei and other researchers are now working on a paper calling for the slur to be removed from the field of genetics. They happened to have scheduled a meeting to plan their project the day the Entomological Society of America announced the name changes, and were excited by the news, Dr. Wei said.

Lymantria dispar and Aphaenogastedriven araneoides will most likely remain without a common name for some time (though if you have suggestions, the society would like to hear them). In the meantime, if you see a hairy, defoliating caterpillar in New Hampshire, you can call it by its scientific name.

O.C.’s Fletcher the dog a finalist in Cadbury Bunny…