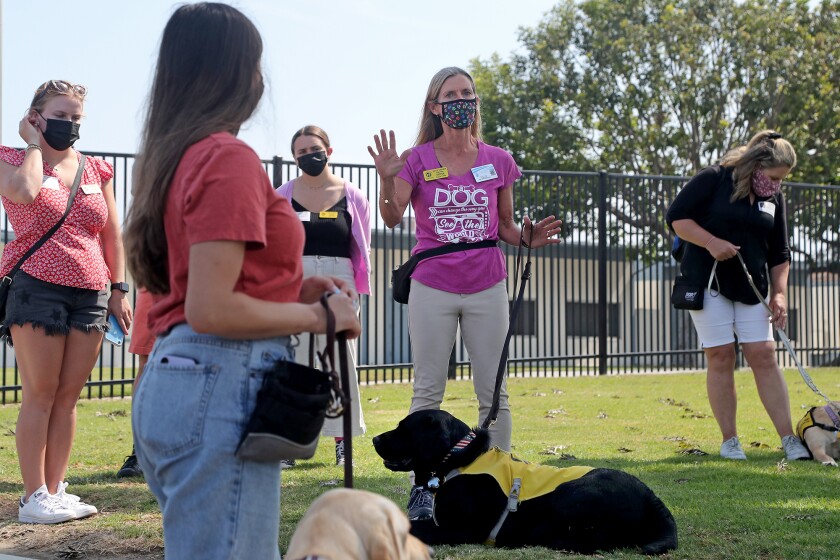 Each Friday, Huntington Beach schoolteacher Holly Sjogren goes to the bank to pour coins into a machine.

The bank employees acknowledge Sjogren’s arrival, but they’re especially happy to see her canine companion. Keeper is an 18-month-old black Labrador retriever and guide dog in training who goes pretty much everywhere with the Hope View Elementary teacher.

“It’s great,” Sjogren said. “The people at the bank all know him. They say, ‘Here comes the Hope View dog!’”

Sjogren and Keeper have been joined at the hip since he was about 8 weeks old, but he’s about to be turned over to the hands of others for “puppy college” through Guide Dogs of America.

Sjogren, who has been teaching in the Ocean View School District for more than 30 years, has raised money for the nonprofit for the last 10 of those. In 2017, the district authorized her to bring a guide dog, Luka, onto the Hope View campus in Huntington Beach.

“I’d love to see it in every school,” said district Board of Trustees clerk Gina Clayton-Tarvin, who was the board president in 2017. “We feel like this program is like the pinnacle of what you can do to support kids, and to make them feel happy when they’re at school.”

All the while, the school has been raising money for Guide Dogs of America — hence the coins. Nearly $20,000 has been raised over the last decade, Sjogren said.

This week, representatives from the organization were on campus to receive a $2,000 check that students, district staff and local Starbucks stores helped raise in just a month’s time as part of the “Pennies for Puppies” program. 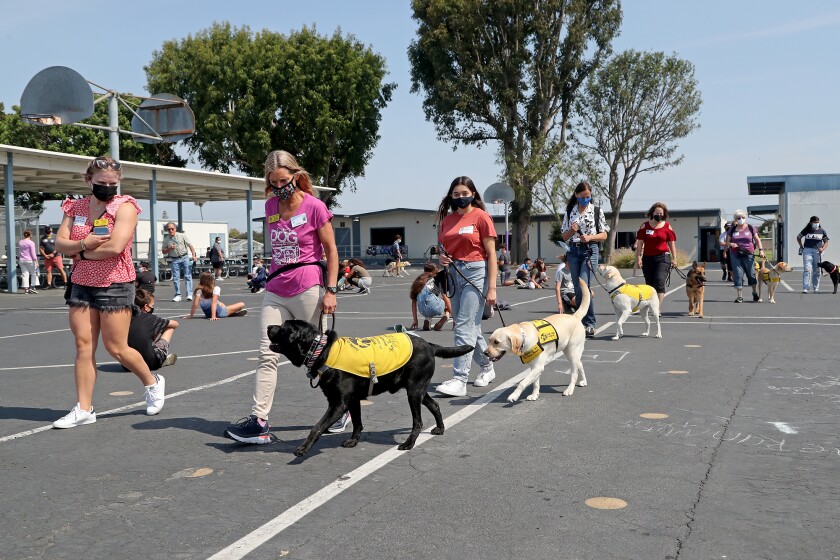 The check was given out as students gathered outside after an earthquake drill, and the money was appreciated. Guide Dogs of America is donation-based; the trained canines are valued at about $60,000 but are given to their partners free of charge.

Sjogren said the Hope View children have grown to love their three guide dogs: Luka, Harry and now Keeper. They use the “Making a Difference” tickets they earn to take pictures with the dog or have the dog visit their classrooms.

Sjogren has several stories about how the guide dogs have made a difference in her students’ lives.

“A fifth-grader in my class was deathly afraid of dogs the first day of school,” she said. “By a month later, he was the first in line to pet the dog.”

The youngster’s mom told Sjogren that until her son became friendly with the dog on campus, he would run away at Halloween if he knocked on a door and a dog barked.

“That year that I had Luka was the first year [the boy] knocked on the door and a dog barked, and he didn’t run away. She said, ‘You’ve changed my child’s life because he’s now not afraid of dogs.’” 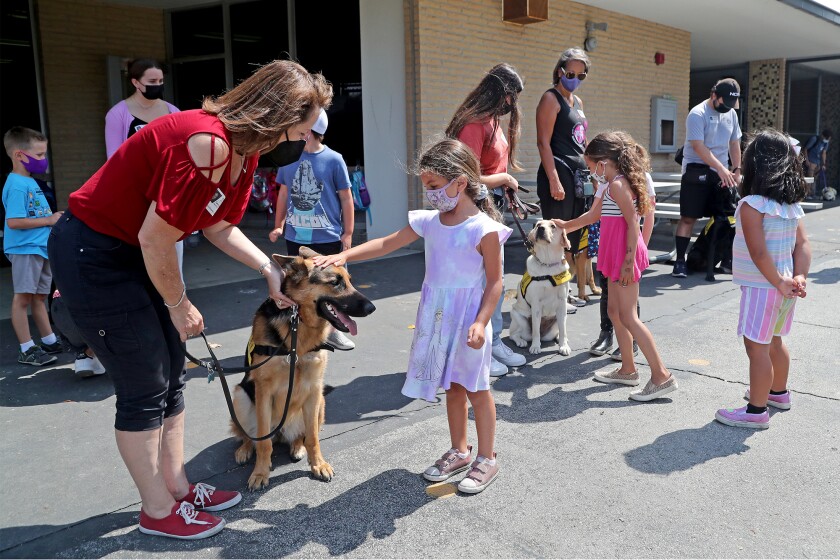 Luka underwent a career change and is now a therapy dog, according to Guide Dogs of America marketing and development associate Mariah Romo. The second pup to go to Hope View with Sjogren, Harry, graduated from the program last month and is now living in Las Vegas with a female partner who is visually impaired.

The day also brought a dozen additional local guide dogs: Puppies ranging in age from seven to 18 months were on campus with their puppy raisers. The dogs went from classroom to classroom, to the delight of the students.

“I liked them because they’re different colors, like black and brown,” said Grant Jacinto, 5, a student in Marci McLaughlin’s transitional kindergarten class.

McLaughlin reminded her students that they had to ask for permission before they could pet one of the puppies.

“This is such a benefit for our kids,” McLaughlin said, adding that her students had filled the “Pennies for Puppies” jar five times over. “They learn proper etiquette with dogs, they learn to overcome their fears with dogs.”

Hope View students also were able to watch a livestream of Harry’s graduation from puppy college online last month, and Sjogren teared up when describing it.

“It’s just amazing that these kids were so involved with that dog,” Sjogren said. “They loved him and invited him to classrooms. We went to birthday parties, we went to soccer games, we went to musical performances. He was a community hero, so that was exciting for me. My husband might tell you something different, but for me, it was all about the school.”

Sjogren said she doesn’t plan to retire anytime soon — she has too many more dogs to get through. With Keeper set to move on as his puppy raising time ends, she said the next Guide Dogs of America puppy should join her in July.

Hope View students are expected to have a vote on the name of the new dog next week, before the conclusion of the school year.

“Our theme at Hope View is ‘A community of caring,’” Sjogren said. “I think we found our niche.”