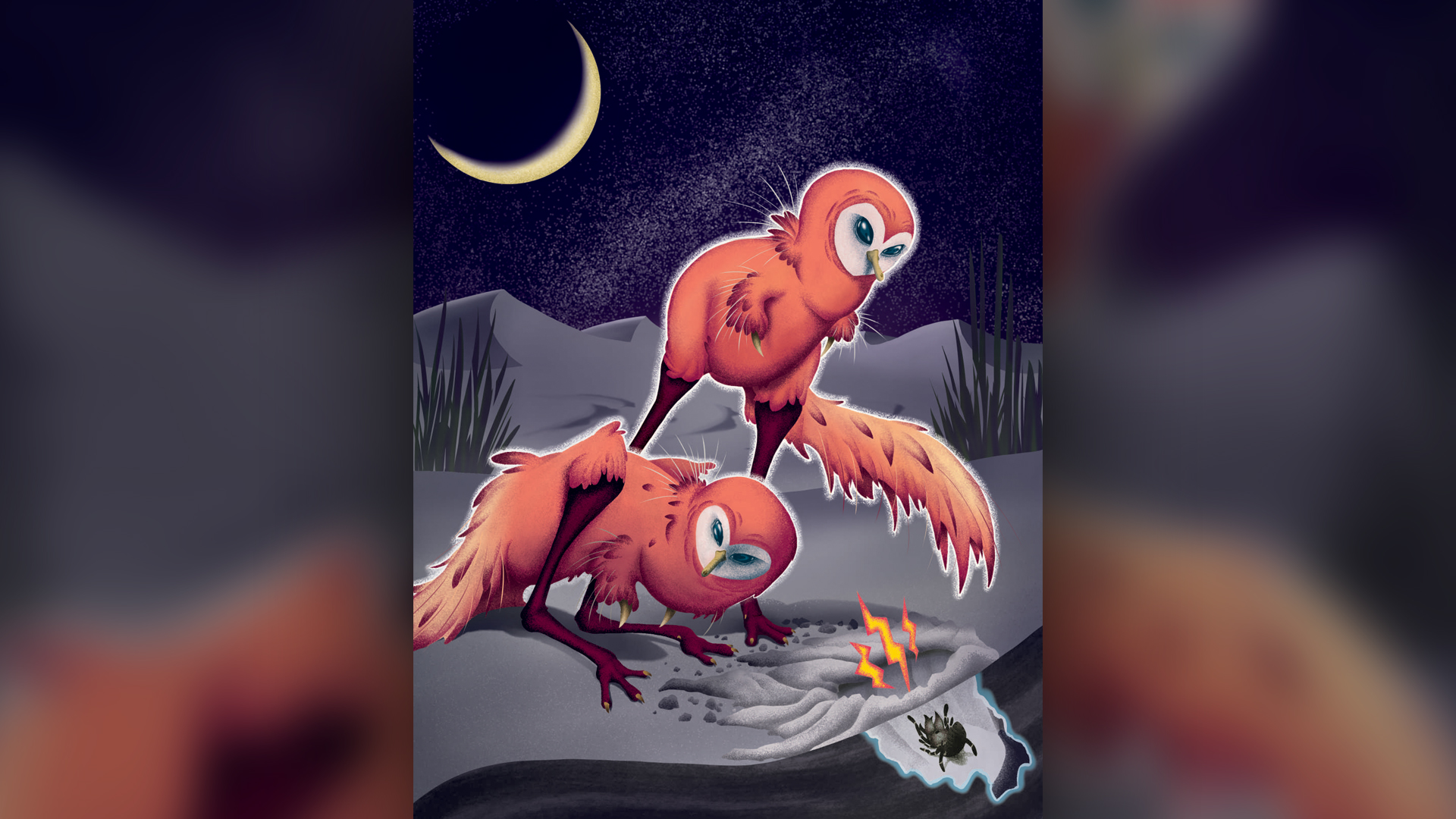 A tiny, meat-eating dinosaur had superb low-light vision and hearing that was likely as good as an owl’s. And like an owl, the wee dinosaur probably used those exceptional abilities to stalk and catch its desert prey under the cover of darkness.

Owl-like Shuvuuia (shu-VU-ya) was a theropod — a three-toed and bipedal carnivorous dinosaur. There’s only one known species, Shuvuuia deserti, and it was smaller than a domestic cat, measuring just 2 feet (0.6 meters) long. Shuvuuia lived about 75 million to 81 million years ago, during the late Cretaceous period (145.5 million to 65.5 million years ago), in what is now the Gobi Desert in Mongolia.

Prior analysis of Shuvuuia‘s fossilized eye bones revealed that it had large eyes that were specialized for seeing in dim light. But at the time, little was known about dinosaur adaptations for nocturnal activity. In a new study, scientists looked at skulls from dozens of species of extinct theropods and modern birds — the only theropod lineage that survived to the present. By comparing dinosaurs’ fossilized eye and ear structures with those in living animals that have nocturnal habits, the researchers were able to see if a dinosaur was adapted for day or night activity.

Soft tissue is rarely preserved in the fossil record, but paleontologists can find clues about dinosaurs’ eyes and vision in the bones that form a circle in the eye socket, known as the scleral ring. Scleral rings are found in many vertebrates (including extinct dinosaurs), and the diameter of this ring reveals the maximum width that an animal’s pupil can dilate, hinting at their ability to see in low light, said lead study author Jonah Choiniere, a professor in the Evolutionary Studies Institute at the University of the Witwatersrand in Johannesburg.

They paid close attention to the cochlea, the part of the inner ear canal that holds sensory receptors for picking up sound waves. Decades of previous research had shown that the length of this canal is closely linked to how well animals can hear, and the length of Shuvuuia‘s ear canal suggested that its hearing would have been “off the charts,” Choiniere told Live Science.

“Shuvuuia had proportionally longer cochlear ducts than even the bird with the best hearing: the barn owl,” Choiniere said. What’s more, the size of Shuvuuia‘s scleral rings showed that it also possessed “incredible night vision — better than any living bird we measured,” he added. 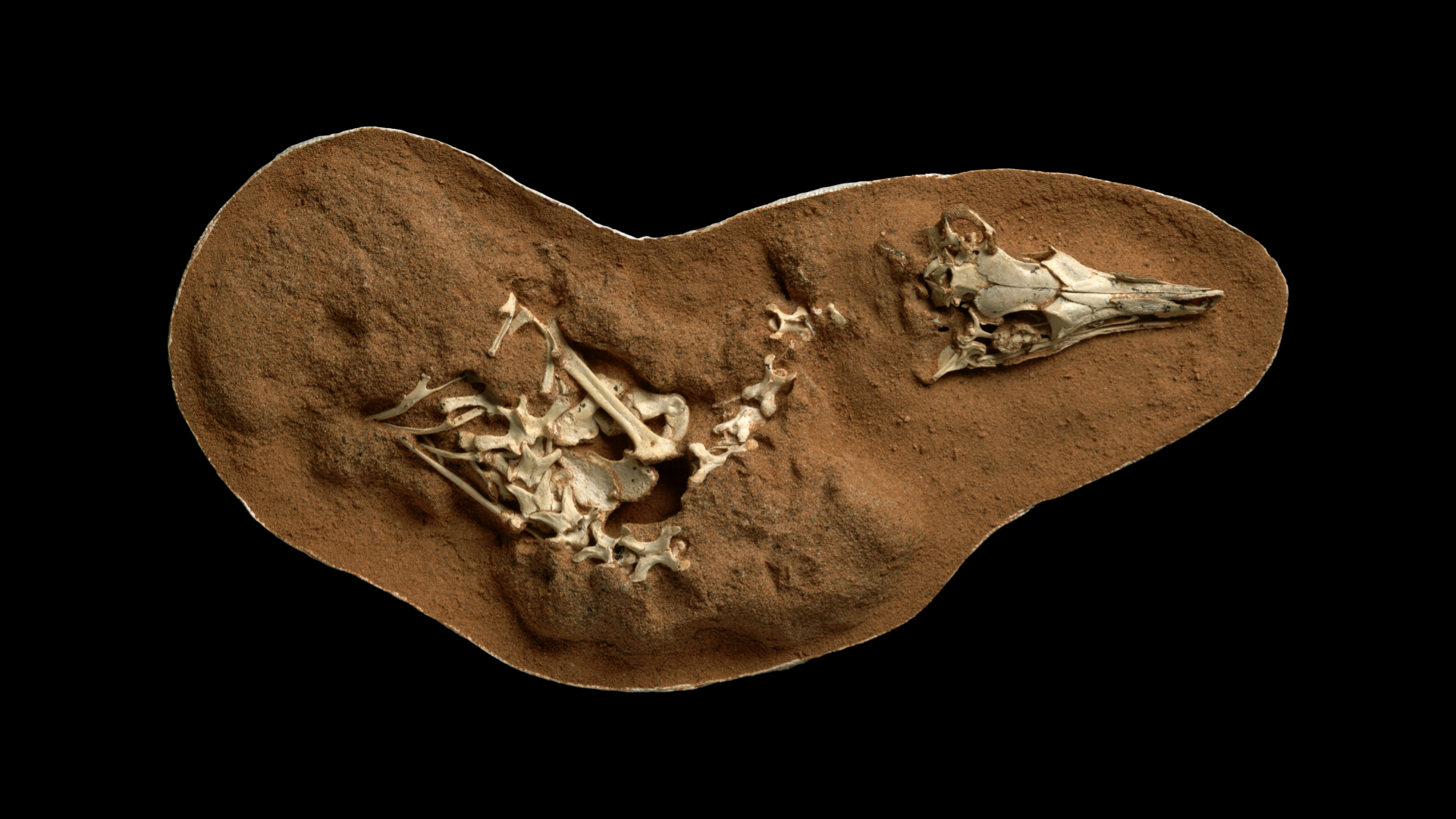 The combination of light-sensitive eyes and superior hearing suggested that Shuvuuia would have been highly effective at detecting and ambushing prey at night, as owls do. By comparison, the theropod Velociraptor, which lived in the Gobi Desert alongside Shuvuuia, had an intermediate eye shape, “and was probably more twilight-active,” said study co-author Lars Schmitz, an associate professor of biology at the W.M. Keck Science Department at Scripps College in Claremont, California.

This is the first time that such extreme specializations for hearing and vision have been documented in an extinct dinosaur; in combining vision with hearing, the study also provides the best evidence for nocturnal behavior in dinosaurs, Schmitz told Live Science.

Shuvuuia was an odd-looking dinosaur, and though it’s related to fearsome meat-eating theropods such as Velociraptor and Tyrannosaurus rex, “it’s totally unlike them,” Choiniere said.

“It’s got a lightly built jaw, and its teeth look like tiny grains of basmati rice. It’s got this massive eye, but the beak is very small,” he said. Shuvuuia‘s forelimbs were powerful and bulky, tipped with a huge claw like an aardvark’s. Capping off this hodgepodge of features was a pair of long, slender hind legs that were built for running. 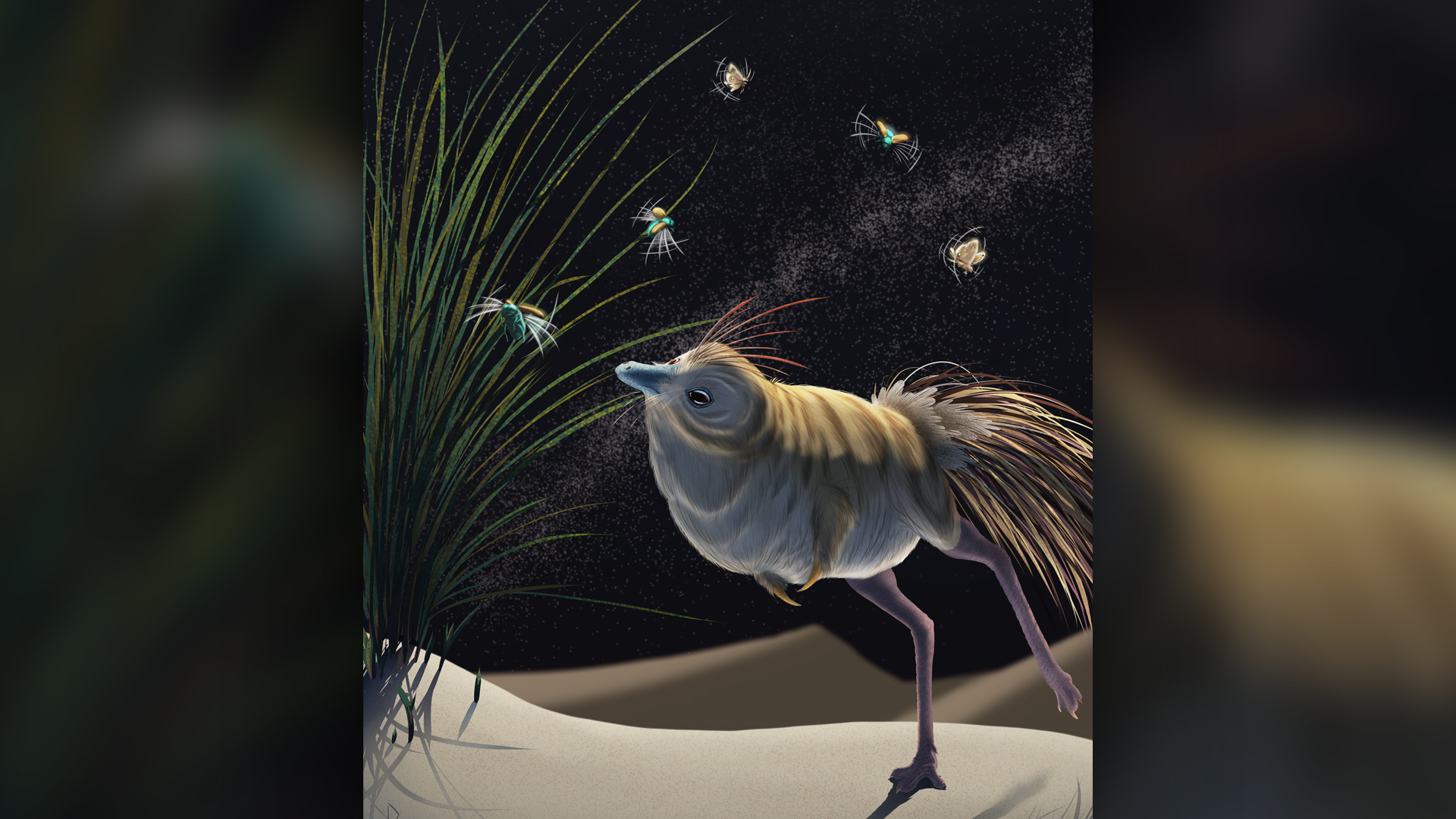 However strange its body may have looked, these traits may have made Shuvuuia a better nighttime hunter. Some modern mammals that live in arid desert environments, as Shuvuuia did, combine lengthy hind limbs with digging forelimbs, “and they often have really good night vision and hearing,” which helps them track and catch hard-to-find prey, Choiniere said. Burrowing desert prey would also be an easy meal for Shuvuuia to dig up with its powerful forearms.

“This observation that Shuvuuia could have operated at night makes a lot of sense in light of the rest of the adaptations,” he said. “It puts those into perspective and allows us to think it would have fit into a desert ecosystem today really well.”

Animals that live together in the same geographical location often require the same resources in order to survive, but they can share them by being either night owls or early birds. Dinosaurs likely did this as well, and this study is just the beginning of paleontologists’ discoveries of nocturnal and daytime preferences in these extinct animals and how those preferences might have affected their habits and behavior, Schmitz said.

“That’s something that we really don’t understand well yet in the fossil record, but we know from looking at living species,” he said. “I think there are some exciting discoveries waiting to be made.”

The findings were published online May 6 in the journal Science.

Using CRISPR Gene Editing Technology as a Research Tool to…