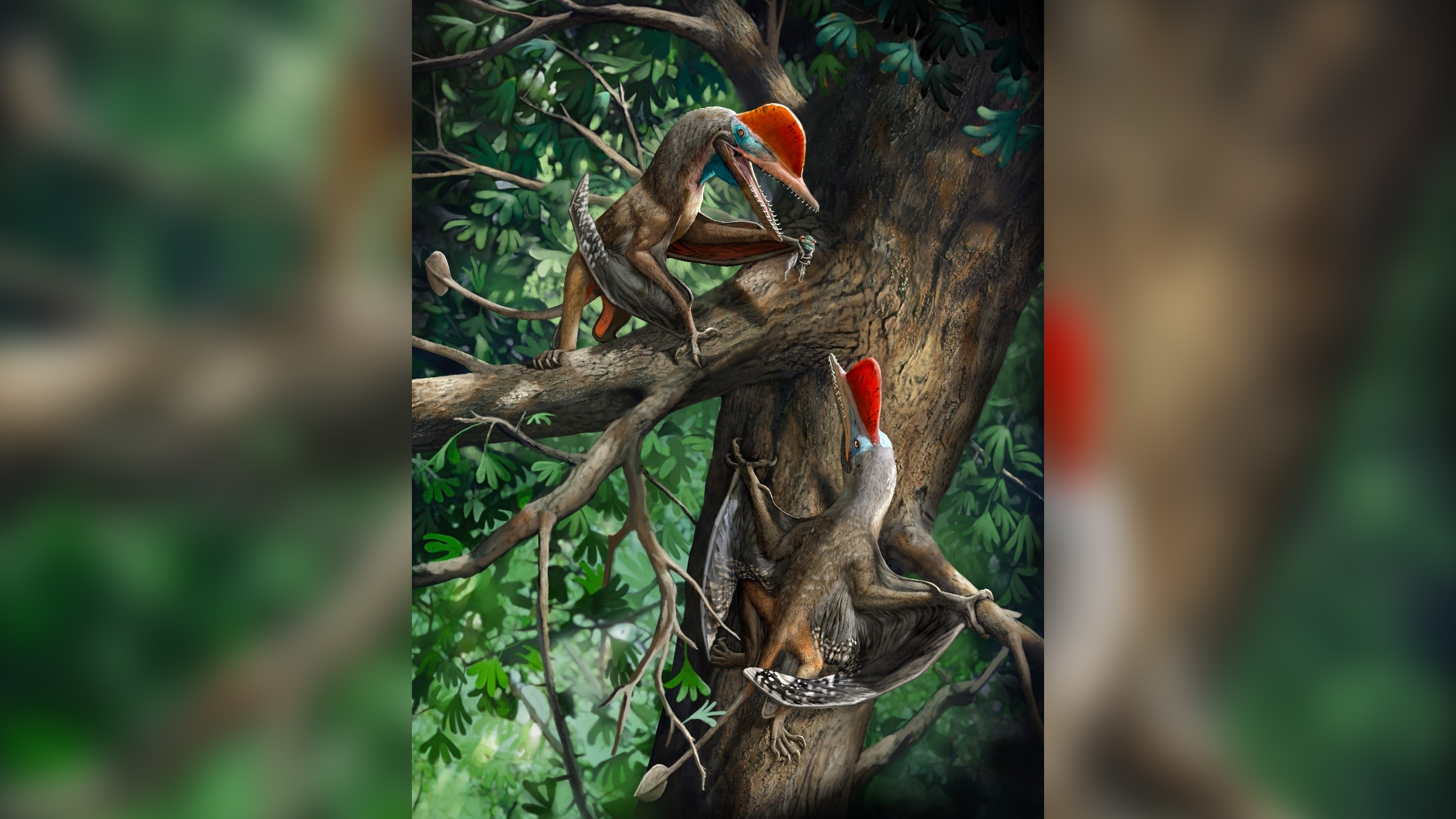 A small, flying reptile glides beneath the canopy of an ancient forest, scouring the trees for tasty bugs. She spots a cicada buzzing in the boughs of a ginkgo tree, then swoops down to snatch it up in her beak. The bug flees; the reptile follows, grasping swiftly along the branches with her sharp claws until — snatch! — she grabs the bug with her opposable thumbs.

It’s not your typical picture of a pterosaur — those iconic, winged reptiles that lived through most of the Mesozoic era (from about 252 million to 66 million years ago). But according to a new study published April 12 in the journal Current Biology, a newly-described Jurassic pterosaur appears to have lived its life among the trees, hunting and climbing with the help of its two opposable thumbs — one on each of its three-fingered hands.

Researchers have named the flyer Kunpengopterus antipollicatus (from the Greek word meaning “opposite thumbed”) — but you can just call it Monkeydactyl. 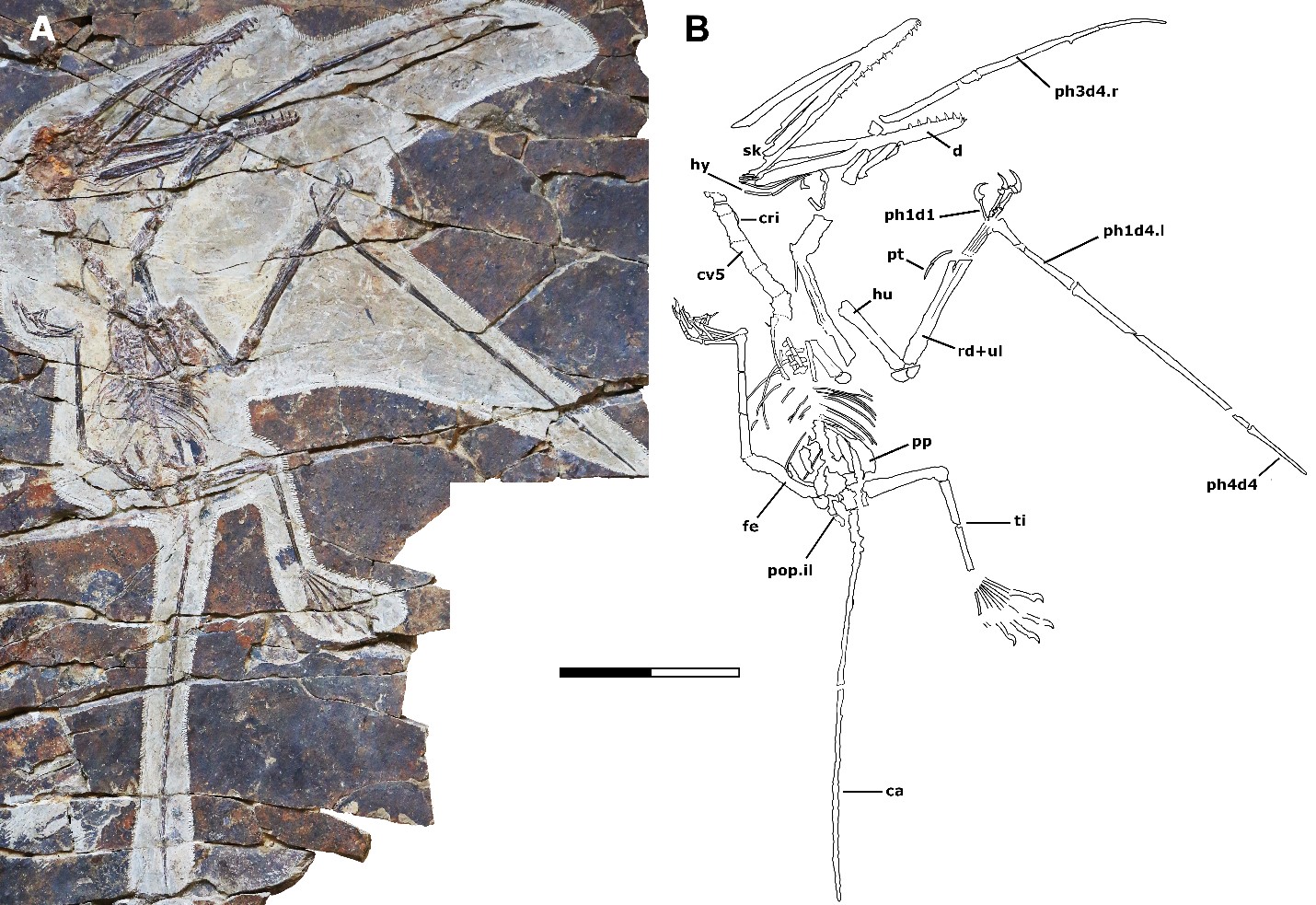 “[Monkeydactyl] is an interesting discovery,” study author Fion Waisum Ma, a doctoral researcher at the University of Birmingham in the U.K., said in a statement. “It provides the earliest evidence of a true opposed thumb, and it is from a pterosaur — which wasn’t known for having an opposed thumb.”

Indeed, the study authors wrote, Monkeydactyl is the only known pterosaur with thumbs, proving that the reptiles were even more diverse and specialized than anyone knew.

The researchers discovered the K. antipollicatus fossil in a slab of rock called the Tiaojishan Formation in Liaoning, northeastern China.

The formation dates to the late Jurassic period (the middle period of the era of the dinosaurs, spanning from about 200 million to 145 million years ago), when the area hosted a lush forest full of tall conifers and flowering ginkgo trees, the researchers said. The formation has yielded more than 100 plant and animal fossils, including dozens of pterosaurs and small, bird-like dinosaurs.

Like many fossils from the area, Monkeydactyl’s remains were incredibly well-preserved. The fossil included several eggs and one near-complete skeleton, clearly showing the opposable thumb or “pollex” on each curled-up arm. The creature was relatively small, with a wingspan just shy of 3 feet (about 90 centimeters), and likely lived a life among the trees, according to the researchers.

Using micro-CT scans (a type of X-ray imaging technique) to “see through the rocks,” researchers examined the complete shape and musculature of Monkeydactyl’s forearms, Ma said. The team concluded that the little reptile likely used its be-thumbed hands to grasp prey and tree branches — an arboreal lifestyle not commonly seen among similar pterosaurs.

In conclusion, the team wrote, this Monkeydactyl’s unique hands reveal “unexpected and invaluable information on the evolutionary history of pterosaurs.” Thumbs up to that!

A new state of light

‘Murder hornet’ found near Seattle is first in the U.S. this…

Rumors have been flying since an adventurous wolf went…

Taliban Want Afghan Deal, Leader Says, Even As They Battle…