To Kill a Swan? Dispute Over a Bird’s Fate Ends With a Twist. 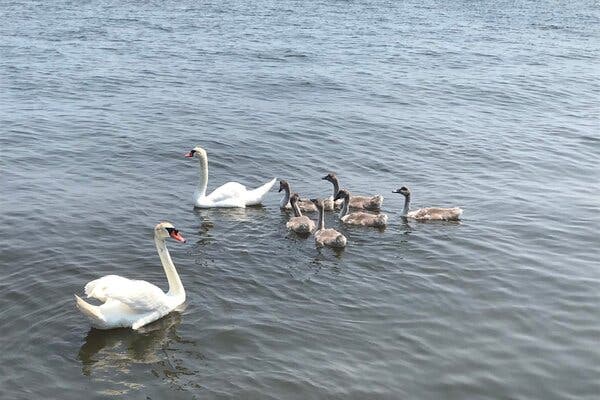 Alfie the swan, foreground, with his mate and offspring. Complaints from some people about what they said was his aggressive behavior led federal wildlife officials to make plans to euthanize him. Irene Almeida

When Friday began, Alfie the swan was on an avian version of death row. By the time evening came, it seemed he had won a reprieve — though not through the efforts of the people who were trying to save him or the government agencies they had pleaded with for help.

Instead, his fate was reversed by an accident.

Mayor John Ducey of Brick Township, N.J., who had been working with residents of his Jersey Shore community to try to find a resolution to Alfie’s plight that did not end with euthanasia, captured the turn of events succinctly.

Alfie, an adult male mute swan, has paddled the waterways in a part of Brick Township known as Seawood Harbor for a number of years, according to Irene Almeida, who moved to the area with her husband, Tony, in 2004 largely because of its natural beauty and wildlife.

“He’s been here forever,” Ms. Almeida said of Alfie, a name that she gave him.

The swan became a local cause célèbre, Ms. Almeida said, after some users of Jet Skis and other personal watercraft complained to federal wildlife officials that he had been dangerously aggressive in their interactions with him.

Ms. Almeida disputed the claim. She said that rather than steer clear of the swan when crossing his path, certain jet ski riders had taken pleasure in provoking him by circling close to him until he became agitated and then filming his reactions on their phones.

“The problem is that some people won’t leave him alone,” she said.

Mute swans are not native to North America and are therefore considered an invasive species. They were introduced to the Northeastern United States in the late 19th century as ornaments on the ponds of wealthy estates and in zoos and aviculture collections, before making their way into the wild. (They are not actually “mute,” but quieter than native swans.)

They can be aggressive, according to the U.S. Department of Agriculture, with some of the behavior occurring because people feed them and usually involving hissing noises rather than physical contact. (Though she said she had warned them against feeding Alfie, Ms. Almeida acknowledged that some people, usually children, did so anyway.)

But mute swans can cause bruises, sprains and bone fractures, according to the agriculture department, and in at least one instance in Illinois, a mute swan encounter resulted in a human fatality after a man in a kayak ventured too close to a nest, was attacked and capsized.

The birds have prompted debate in several states. In 2014, state conservation officials in New York set a goal of eliminating virtually all the swans within 11 years, largely because of evidence that they were destroying the habitats of native ducks and geese while posing a risk to passenger jets that might strike them. The proposal drew strong opposition, and Gov. Andrew M. Cuomo ultimately signed legislation blocking it.

Susan Russell, the wildlife policy director for the Animal Protection League of New Jersey, said that when friction arises between mute swans and people, it is because the people, not the birds, are the aggressors. She noted that there had been similar problems last summer in Greenwood Lake, which straddles the New York border in northern New Jersey.

The solution, she said, is simple: “Leave them alone. Give them room.”

Ms. Almeida said that to her and many of her neighbors, Alfie was not threatening in any way. She and her husband ride jet skis themselves, she said, and had learned to either give Alfie a wide berth or slow down when approaching.

Nonetheless, at least one local resident contacted federal wildlife officials to complain about the swan’s behavior. An inspector visited the area last month, and, according to a Department of Agriculture spokeswoman, witnessed the bird behaving dangerously around people.

“During one of the visits in June 2021, the swan was seen attacking a jet ski multiple times,” the spokeswoman, Tanya Espinosa, said.

(Fred Golden, a local resident who expressed concerns about the swan to federal officials and his neighbors, hung up when called for comment and did not respond to subsequent requests.)

Based on the inspector’s observation, Ms. Espinosa said, the next step — a death sentence — was preordained. Under New Jersey’s wildlife regulations, a species that is deemed invasive cannot be moved to a different habitat.

“The New Jersey Division of Fish and Wildlife does not authorize relocation for mute swan since they are an exotic species,” Ms. Espinosa said. “Because relocation isn’t allowed by New Jersey, the only option is to humanely euthanize an aggressive bird.”

The Almeidas and other residents of Seawood Harbor, which is on Barnegat Bay across from a barrier island that is home to summer destinations like Seaside Heights and Point Pleasant Beach, refused to accept that.

They contacted the operator of a local animal rescue organization, who agreed to take Alfie if the swan could be brought there. But transporting an animal under such circumstances requires a permit from New Jersey’s wildlife enforcement agency.

The swan’s supporters sought the help of Mayor Ducey and other elected officials, including State Senator James W. Holzapfel, in trying to get the permit.

Those efforts appeared to hit a wall on Thursday, when a New Jersey Department of Environmental Protection staff member effectively punted the matter to federal officials in a note to Mr. Holzapfel and two other state lawmakers.

“The department acknowledges the interest in this issue,” the note said, adding that because of a contract with agriculture department officials for handling such issues, New Jersey officials were “deferring this decision to them after the community reached out.”

A spokeswoman for the Department of Environmental Protection said in a statement that the agency “does not relocate aggressive, nonnative wildlife to zoos or other private settings.”

So despite there being a willing recipient for Alfie, he could not be moved and was set to be euthanized as early as Friday.

“It’s criminal,” said Ms. Almeida, adding, “It boggles my mind that I’m even involved in this.”

And then something unexpected happened.

John Bergmann, the director of Popcorn Park, the rescue organization that had agreed to take Alfie, got a call Friday afternoon: There was a swan in the waters near Seawood Harbor with fishing line wrapped around its beak and in need of help.

Mr. Bergmann drove to the area and, using bait, got the swan to shore, into his vehicle and back to his facility.

“I’m pretty sure it’s the same swan,” he said in a phone interview, adding that, given the bureaucratic obstacles to trying to move the bird, the tangle of fishing line had “probably saved his life.”

Late Friday, the rescued swan’s identity still awaited official confirmation. But the likelihood that it was Alfie, and that he had made his way to Ms. Almeida’s desired location even without the necessary paperwork, was welcome news to her.

‘Mistrial of Chinese professor has dented US…

Large Dinosaurs Were Prone to Extinction Way Before The…

RoboWig: A Robot That Can Help You Untangle Your Hair