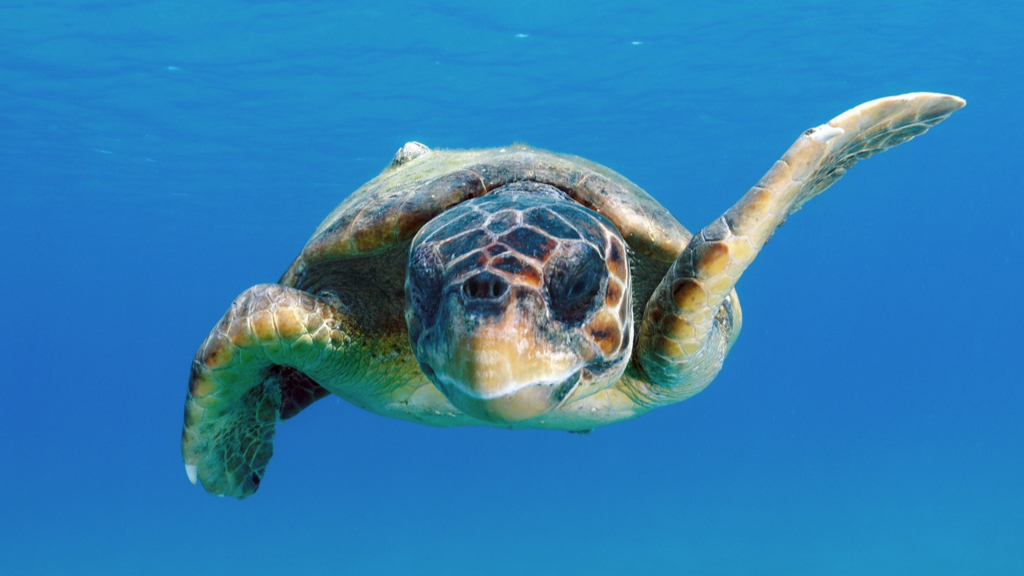 North Pacific loggerhead sea turtles (Caretta caretta) hatch on the shores of Japan and spend much of their time in the open Pacific, but sometimes mysteriously crop up in Mexico, 9,000 miles (14,500 kilometers) away from their original nesting ground.

That incredible journey requires them to pass through potentially deadly, cold waters that should be inhospitable to them, since loggerheads rely on warmth from the surrounding environment to maintain their core body temperatures. Now, scientists have a clue as to how the turtles survive this epic migration.

“This mystery had been around for decades, and nobody had a clue how to explain it,” said senior author Larry Crowder, a professor of marine ecology and conservation at Stanford University’s Hopkins Marine Station and a senior fellow at the Stanford Woods Institute for the Environment.

Along the North American Pacific coast, seasonal winds from the north periodically sweep down the shoreline, pushing warm surface waters offshore. Cold water from the deep ocean then rises up to replace that warm water, dragging up an abundance of nutrients with it. Tropical animals, including loggerheads, rarely venture into these cold waters from the open Pacific, Crowder said. Charles Darwin even described the region as “impassable” for warm-water-loving critters, he added.

But according to the new study, published April 8 in the journal Frontiers in Marine Science, loggerheads may have a fleeting opportunity to reach the Mexican coast during El Niño, a climate cycle that shifts warm water in the western tropical Pacific Ocean eastward along the equator.

“A warm ‘door’ needs to open for these turtles to get to Mexico,” Crowder told Live Science. The study authors refer to this temporary door as a “thermal corridor” — essentially a passageway of warm water. “During El Niño, the turtles get a shot at going across.”

This study not only sheds light on a long-standing mystery but could also provide critical information for protecting loggerheads, which are considered “vulnerable” by the International Union for Conservation of Nature (IUCN). Conservation efforts may need to adapt as the turtles react to warming waters, driven by climate change, Crowder said.

“With climate change comes increasingly warmer sea surface temperatures and longer periods of warm water events in the Pacific Ocean,” said Carolyn Kurle, an associate professor of biological science at the University of California, San Diego, who was not involved in the study.

If the thermal corridor hypothesis is true, more loggerhead juveniles may migrate to the North American coast over time, Kurle told Live Science in an email. This could be beneficial to young turtles, since the ample nutrients in these coastal waters boost the turtles’ food supply, she said. “But it would be terrible” if more young turtles accidentally became ensnared in fishing nets along the coast, especially since those turtles would not have the chance to return to Japan and mate, Kurle told Live Science.

Loggerheads can be found all over the world, primarily in subtropical and temperate waters, and are divided into nine subpopulations, including the North Pacific subpopulation, according to the National Oceanic and Atmospheric Administration (NOAA). Scientists first got a clue that North Pacific loggerheads migrate between Mexico and Japan when Adelita, a female turtle, was released from captivity in Baja California in 1996 and immediately made a beeline for East Asia, Crowder said.

Marine biologist Wallace Nichols had attached a satellite-tag to Adelita, so he was able to track her entire journey to Japan, according to PBS. Crowder and his co-authors used similar tracking data for their new study, but they pulled from an enormous dataset of 231 juvenile loggerheads whose migratory patterns had been monitored for 15 years.

About 97% of these loggerheads remained in the open ocean and did not venture toward the North American coast. In fact, when these turtles did near the edge of the coastal ecosystem, they promptly turned around. Dana Briscoe, a postdoctoral researcher in Crowder’s lab at the time, found that the timing of the turnaround appeared to be driven by Earth’s magnetic field, which the turtles can sense and use to navigate through the ocean. Presumably this ability helps them avoid cold water, Crowder said.

However, Briscoe noticed that not all the turtles turned around at the typical point — six of the 231 turtles just continued on their merry way and swam right into coastal waters, entering an area known as the California Current Large Marine Ecosystem (CCLME). The team looked closer at these six outliers and found that they each made their journey in the spring, and based on data gathered from remote sensors, these wandering turtles “experienced unusually warm conditions,” compared with their counterparts.

“And the two that made it closest to Baja experienced the warmest water conditions,” Crowder said. Seeing this connection to warm water, the team developed their thermal corridor hypothesis.

But because only six turtles out of 231 — roughly 3% — entered the CCLME, the team needed more data to back up their idea. So they teamed up with Calandra Turner Tomaszewicz, a scientist at the NOAA Southwest Fisheries Science Center, whose group had been studying the bones of turtles that had stranded in Mexico and died on the shore. 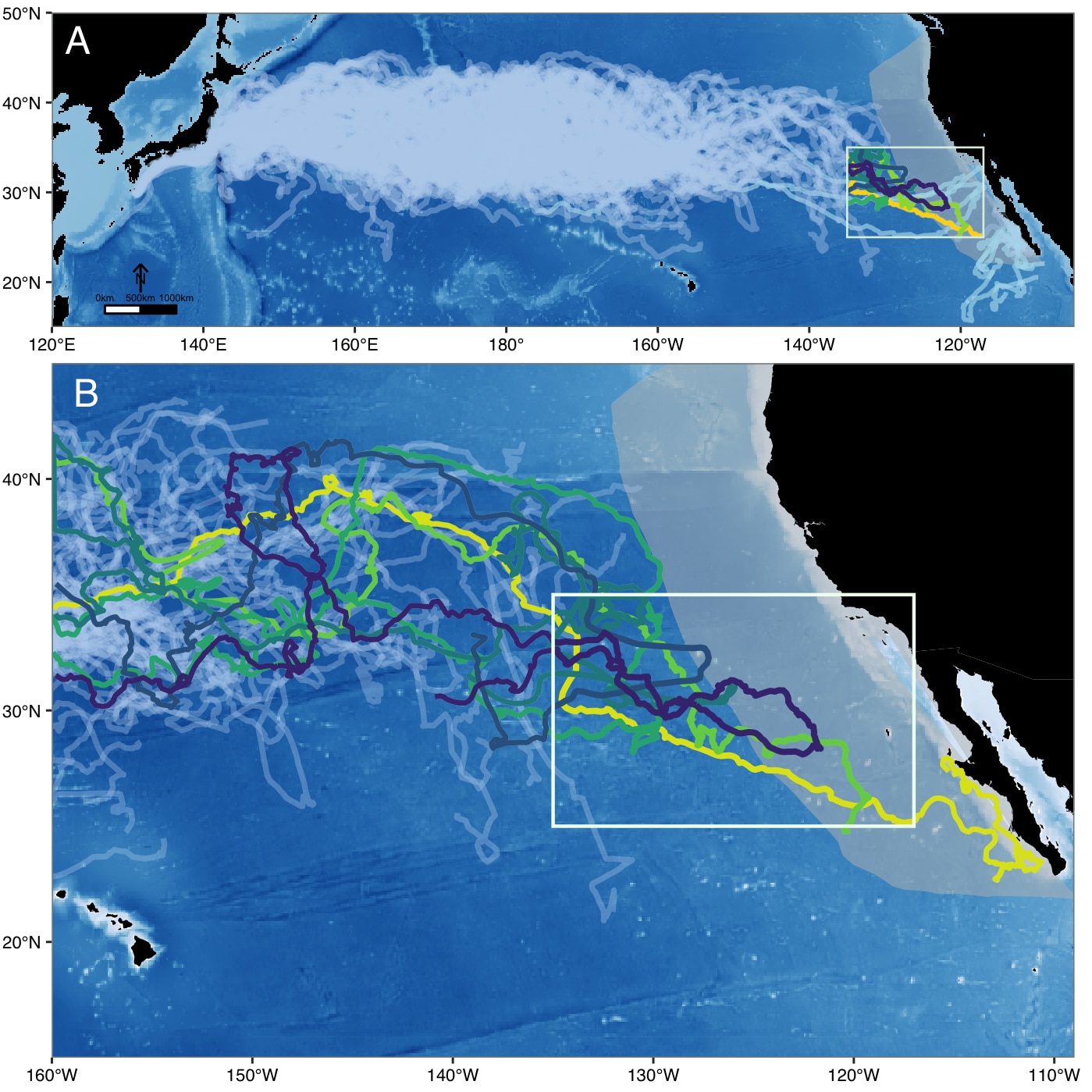 Sea turtle bones contain annual growth rings, similar to trees. A new ring grows around the outside of the bone each year, while one ring erodes from the center of the bone. A turtle’s humerus bone, a type of leg bone, has about six to eight growth rings at any given time, Crowder said.

These growth rings contain clues about what a turtle ate in a given year, in the form of stable isotopes, which are chemical elements with different numbers of neutrons. Provided a scientist knows when the turtle died, they can use these chemical clues to determine what the turtle ate throughout its life, and therefore, where that turtle was likely located.

“And the stable isotope ratios in open ocean-food, like jellyfishes, is dramatically different than in crabs,” which is what a loggerhead would eat in coastal waters, Crowder said. In this way, the team determined when a given turtle made the jump from open to coastal waters. They then looked up water temperatures in that year.

Turner Tomaszewicz and her colleagues analyzed the growth rings of 33 loggerheads in Mexico and found that more than 60% of the turtles entered the region near the shore in a year with warm ocean conditions. Grouping the turtles by year revealed that far more turtles arrived in Mexico in the warm years than cool ones.

The hypothesis might also explain why loggerhead turtles from Japan cropped up in San Diego Bay in 2016, an El Niño year, Crowder said. The turtles only rarely show up in southern California, and even then, they don’t usually appear in large groups, as they did that year, according to The San Diego Union-Tribune. The strange event led some scientists to wonder whether, with climate change, loggerheads might come to San Diego more often.

Of course, the thermal corridor hypothesis is still just that — a hypothesis. Ideally, the team would be able to satellite-tag more loggerheads, track their movements and see how many migrate to Mexico in El Niño years, compared with cool La Niña years , Kurle said. However, seeing that so few turtles seem to enter the CCLME, this effort would likely be expensive and impractical, Crowder said. Instead, he said he hopes to conduct an experimental study with a few dozen turtles, where two groups of loggerheads would be released into the open ocean near the CCLME boundary, one in a El Niño year, and one in a La Niña year.

But for now, even with its limited data, the current study “will help those who seek to understand and manage this vulnerable species with one of the longest migrations in the animal kingdom,” Kurle told Live Science.

Mammals can use their intestines to breathe